A look back at Asian, European ABS markets in 2018: Prices remain weak for 9 months in sync with styrene

by ChemOrbis Editorial Team - content@chemorbis.com
ABS markets both in Europe and Asia made a bullish start to 2018 and preserved the upward trend during most of the first quarter on the back of rising costs. However, both markets witnessed a visible softening trend for the last three quarters to end the year on multi-year lows.

China’s ABS market rebounded in early November of 2017 as the rally of crude oil prices, higher upstream costs as well as limited availability in Asia encouraged sellers to take a firmer stance despite the lack of demand.

Europe was on an uptrend for 4 consecutive months

European ABS markets responded to the firming in Asian markets due to reduced import volumes from Asia as well as rising costs as of December 2017 and posted increases for the following four months until April.

Slumping styrene paved the way for the downward momentum in ABS

As can be seen in the below graph created by ChemOrbis Price Wizard, spot styrene prices in Asia peaked in early August while Europe mostly followed a decreasing trend since March . The visible losses in the upstream styrene market are one of the inevitable factors that paved the way for the decreases in the ABS market. 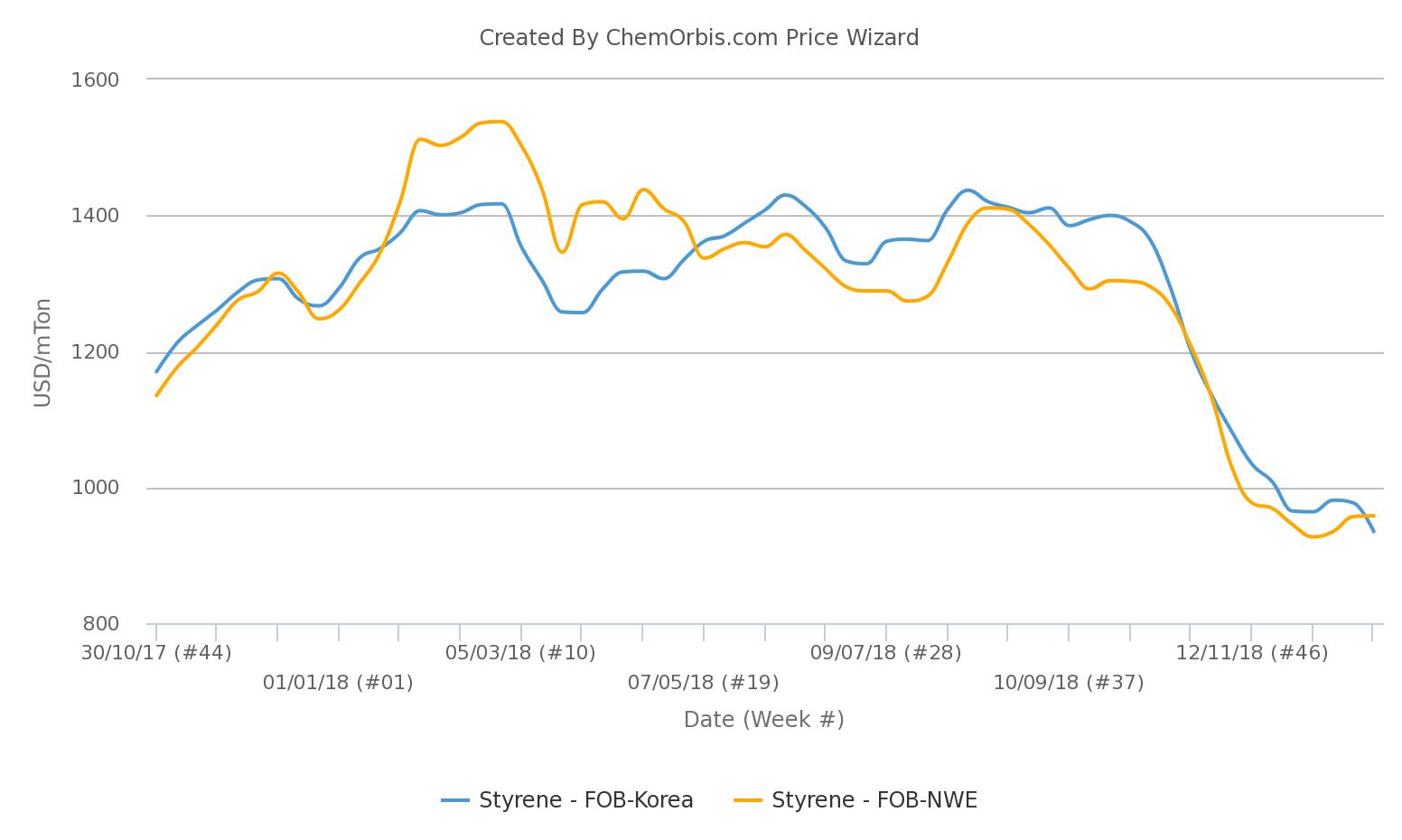 Styrene hit more-than-2-year low in Europe, 3-year-low in Asia in December
According to ChemOrbis data, European spot styrene prices turned down as of August and posted significant drops to hit more than two year-lows in early December. Asian styrene prices, meanwhile, are now standing at a 3-year low on weekly average after losing 35% since August.

According to ChemOrbis Price Index, import ABS markets in China and Southeast Asia followed a mostly downward trend for 9 months after reaching their peak levels by late February. In December, both markets reached their lowest levels not seen since late September-early October 2016.

Depreciating local currencies in the midst of trade tensions between China and the US deterred players from engaging in fresh material in Southeast Asia and China. Players mostly adopted a cautious stance amid lingering uncertainties related to the trade war, which consequently affected their ABS business.

European ABS markets lost 23% since their peak in March