A look back at Middle Eastern, African PP markets in 2018: Softening trend prevails on tepid demand

by ChemOrbis Editorial Team - content@chemorbis.com
Middle Eastern and African PP markets started the year with strong pricing policies because of several shutdowns at the regional plants and then-high monomer and feedstock costs. However, the latter half of the year saw markets track the global downtrend amid poor macroeconomic conditions and political uncertainties.

During the first quarter of the year, more than 1.5 million tons/year of capacity was scheduled to be offline across the region and unexpected outages at several other plants further contributed to the firm prices. 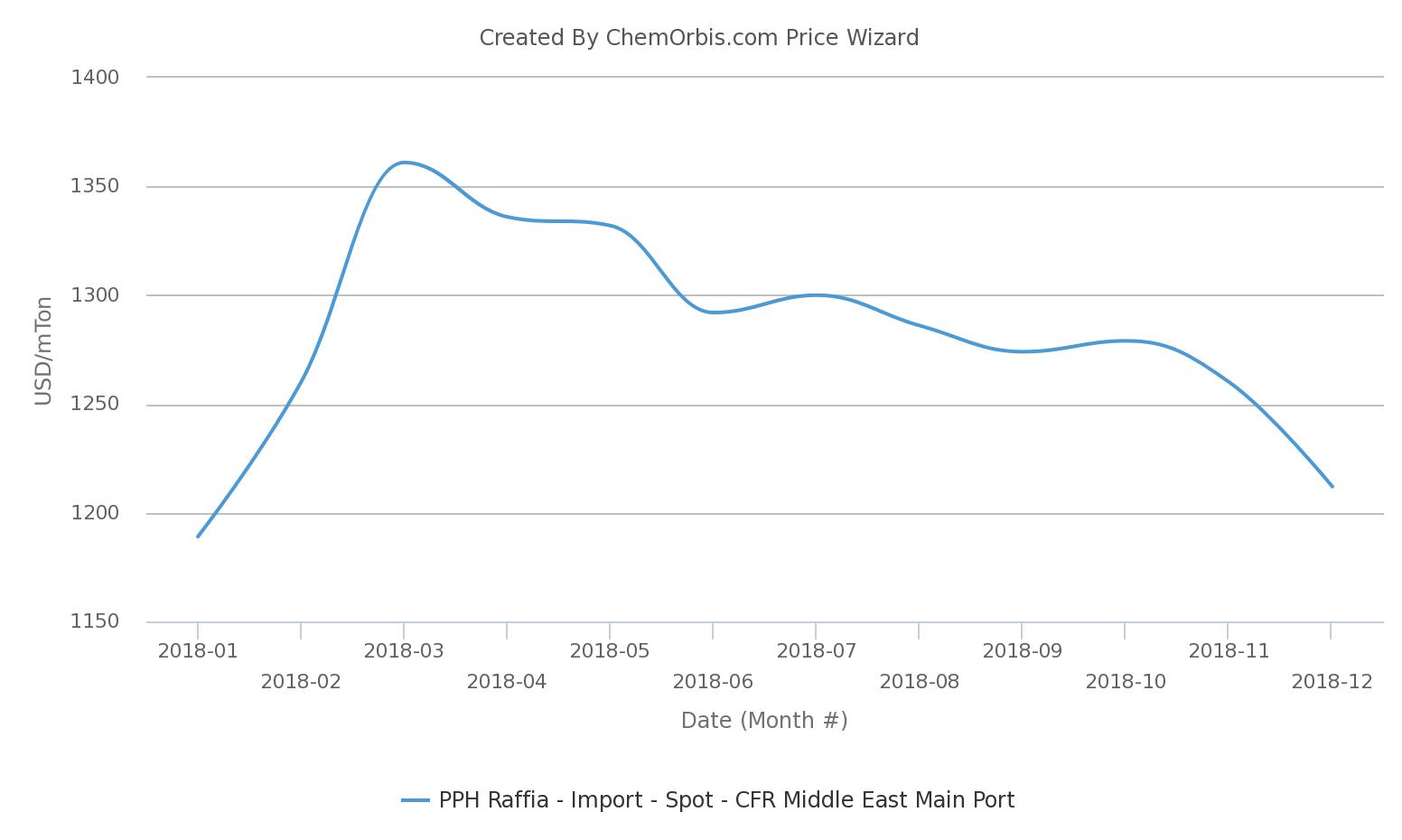 The monthly data from ChemOrbis Price Wizard shows that homo PP injection and raffia offers in the Middle Eastern markets steadily firmed up until the third month of the year, coinciding with the restricted availability owing to the maintenance turnarounds and healthy demand in the global markets.

VAT implementation in S Arabia, UAE kicked off in 2018

Aside from the offline capacity, PP prices in Saudi Arabia and the United Arab Emirates were also weighed on by the implementation of the 5% value-added tax (VAT) in January. This resulted in delayed shipments as market players needed time to become acclimated with the new system.

Prices begin to slide in H2 across Middle East

However, downward pressure made itself felt on the Middle Eastern market amid high swings in crude oil and monomer costs, particularly during the second half of the year. Demand began tapering off in the run-up to Ramadan and failed to pick up after the Eid ul-Fitr holiday. As the year draws to a close, the sentiment in the region has now fully shifted into a bearish mode.

In Jordan and Lebanon, trading activities were pressured by political issues and unfavorable economic conditions, with prices following a mostly steady to softer trend throughout the year.

The upward trend seen at the beginning of the year also failed to carry through the rest of 2018 across Africa.

In East and West Africa, demand was negatively impacted by the early arrival of the rainy season, which started in May and lasted until September. Buying appetite has also been capped by tight cash flows and uncertain macroeconomic environments in Kenya and Nigeria.

In North Africa, the PP markets have been on a stable to soft trend for the most part of the year, as expectations of a recovery in the buying sentiment after the Eid ul-Fitr holiday fell flat. Unfavorable exchange rates also weighed on the trading activities in Tunisia and Algeria.

At the start of the year, homo PP prices in Egypt shot up quickly and the market followed a relatively firm path in the months leading to Ramadan, in line with the global uptrend, bullish energy costs and limited supplies.

However, offers failed to prop up after Eid ul-Fitr holiday that followed Ramadan, as can be seen in the monthly data above. During the second half of the year, demand winded further down amid cash flow restrictions that resulted in curtailed purchasing power. Import homo PP film, raffia, and injection offers in Egypt currently stand at their lowest levels in more than a year.

In the country’s local market, domestic producers EPPC and OPC have largely adopted steady to soft pricing policies amid the overall weakness in demand throughout 2018.