A look back at PVC markets of Turkey and Europe in 2018: Reduced consumption in Turkey counterbalanced by low supplies in Europe

by ChemOrbis Editorial Team - content@chemorbis.com
Turkey’s PVC market faced stiff times this year amid economic challenges. This consequently resulted in largely reduced exports to Turkey from Europe, where the local PVC markets steadily softened for the most part of the year.

Disregarding a short-lived uptick in early June, import prices in Turkey faced a consistent decreasing trend from March to November 2018 and the non-dutiable k67 market lost 12% in this timeframe on average, according to ChemOrbis Price Index.Before prices turned up in late November due to emerging tightness concerns, they saw the lowest prices since March 2016 .

Waning prompt supplies along with lower quotas from Europe resulted in a severe tightness and pushed Turkey’s PVC market up towards the end of 2018. Not only an extended shutdown at a French major, Kem One but also Petkim’s planned maintenance reinforced the supply woes.

The gap remained the widest between Turkey and Italy through 2018

The weekly average data from ChemOrbis Price Index also suggest that the gap between Italy’s local k67 market and Turkey’s duty-free import k67 market was above $200/ton for the most part of the year. This is marked as the widest gap in such a long period. 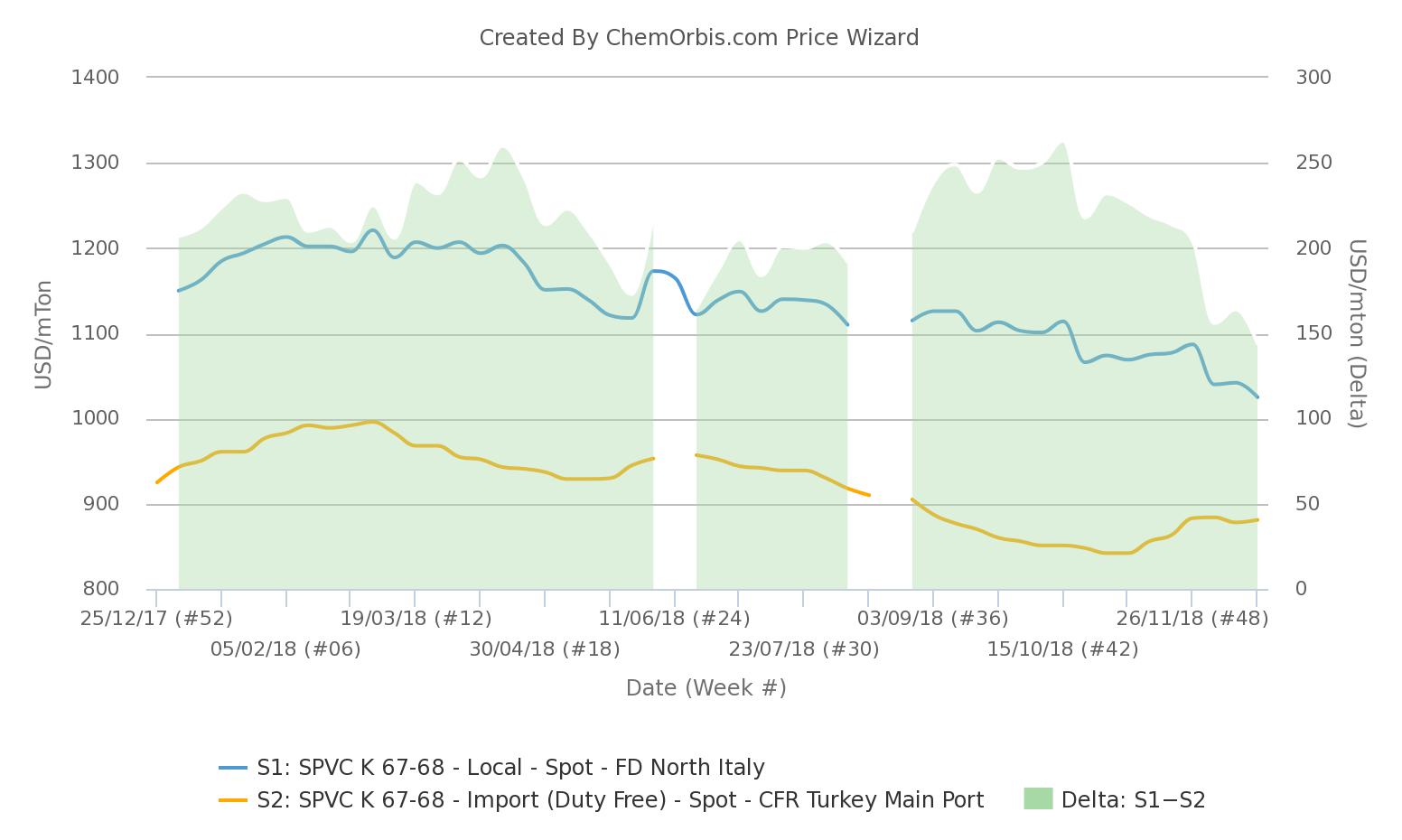 Turkey’s PVC consumption was hit by the devaluating lira

This was due to the fact that the Turkish market witnessed notably lower consumption on the buyers’ side due to cash constraints. The Turkish lira plunged by as much as 85% in August against the USD when compared to the beginning of this year before paring some losses in the following months and ending the year with a 42% devaluation.

ChemOrbis Import Statistics also affirm that Turkey’s cumulative PVC imports in January-October were down by 10% to slightly above 540,000 tons year-on-year in line with lower consumption power.

Customs regulations were also changed due to the political crisis with the US that kicked off in May, when imports of American PVC to Turkey were restricted via a revision in the inward processing regime. Although Turkey resumed issuing certificates in early September, interest remained moderate due to difficulties in affording a letter of guarantee for manufacturers as an additional 50% tariff was imposed on US PVC.

Rising duties found a remarkable reflection on import volumes in July and August as Turkey’s imports of US PVC shrank by 80% and 63%, respectively, while no imports were recorded in September and October. Converters partially turned to alternative options including Russian and Ukrainian materials.

Having lost the Turkish market, American cargos formed a pressure point on Europe’s local markets starting from summer. This was also the case in Southeast Asia and India amid the trade war between the US and China.

According to ChemOrbis Import Statistics, Italy imported 28,000 tons of American PVC in the first 8 months of 2018 when compared to a total of 12,000 tons imported during the whole 2017.

In Europe, PVC struggled with growing supplies starting from May mainly due to slow export sales to the one of the main export destinations, Turkey. This coupled with modest demand and cushioned the impact of maintenances at several PVC makers during spring and summer. The sentiment was so weak that Italy’s PVC market traded at par with spot ethylene prices in Europe in June-September.

Shutdowns failed to boost PVC sentiment in Europe until December

However, fears of shortage were somewhat prompted in November and December, when shutdowns and force majeures in France, Germany, Czechia and Poland were combined with the logistic issues stemming from low water levels on the River Rhine and the scheduled turnarounds in Russia and Ukraine .

This kept monthly decreases relatively in check but still did not prevent local spot prices from nearing a two-year low on average at the end of the year, according to ChemOrbis Price Index.