A look back at Turkey’s PP and PE markets in 2018: Tough economic environment gives polyolefin players a rough ride

by ChemOrbis Editorial Team - content@chemorbis.com
Polyolefin players faced quite tough times throughout 2018 due to the depreciation of the Turkish lira against the USD and the euro. The political tensions between major economies also altered the balance of global trade.

Shutdowns in the Middle East propped up PP market

PP prices started 2018 on a firm note as prices rose steadily until late February. Afterwards, a bearish note kicked in and lasted for more than two months before supply concerns helped the market gain modest ground in H2 April. Throughout the second half of 2018, PP prices followed a stable to soft trend until the year-end lull accelerated price drops in November. 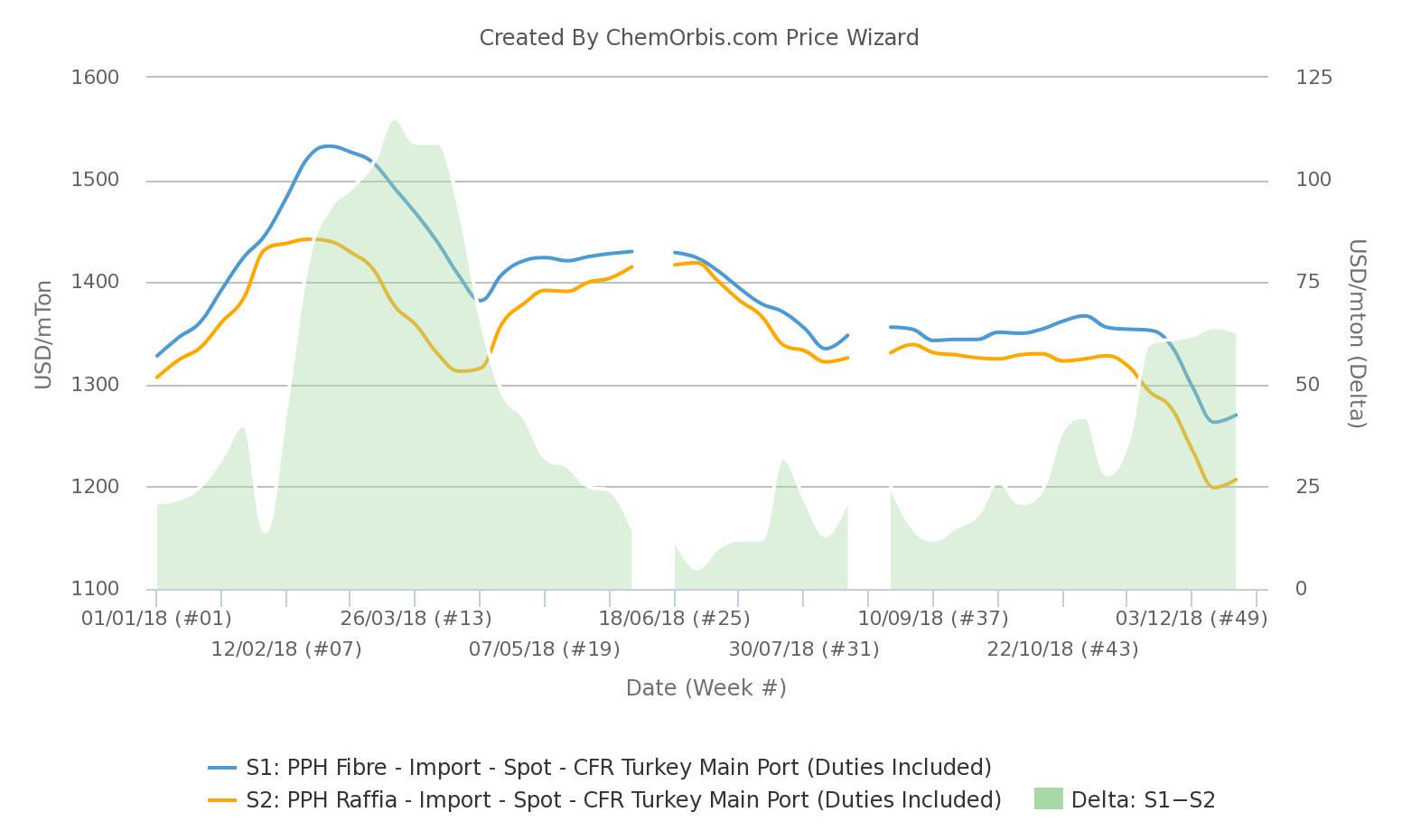 The supply of PP raffia was mostly sufficient during the year despite cautious replenishment activities on the side of traders amid difficulties in opening letter of credits. Turkey started to receive first homo-PP raffia offers from two brand new plants, SOCAR Polymer’s unit in Azerbaijan and S-Oil’s new plant in South Korea by October.

Nevertheless, the absence of Saudi Arabian NATPET had an impact on the fibre market along with scheduled turnarounds at Al-Waha, Petro Rabigh and Petkim. Short supplies kept the size of discounts in check for PP fibre for the most part, with its premium over raffia staying above $100/ton during March.

The PE market, meanwhile, did not face any visible supply woes except for a shortage of HDPE film in the first quarter of the year. Although Iranian offers became scarce in the third and fourth quarters amid thin demand based on re-imposed US sanctions, the emerging cargos from new US capacities kept the market well supplied.

According to the weekly average data obtained from ChemOrbis Price Indexes, Turkey’s import PP market carried a premium over China for the most part of the year. .

However, the case for PE was not the same. Import HDPE film prices consistently traded at a discount to China until late November, while LDPE film moved above China only during November before losing its small premium shortly after. Turkey’s LLDPE market was below the levels in China during the whole second half of 2018.

Rising tariffs in China paved a way for cargos from the newly-started US plants to Turkey and Southeast Asia as well as Europe in the second half of 2018. Competitive American PE cargos exacerbated the downward pressure on sellers in Turkey. According to ChemOrbis Price Index, import HDPE prices hit a 16-month low by December, while LDPE and LLDPE tumbled to almost a decade-low.

The buying interest was better for prompt materials during the year when compared to imports. Still, during the second half of 2018, local prices were down by nearly 15% for homo-PP raffia and by 11-12% for PE products, ChemOrbis data revealed.

The consumption in major end markets including construction, white goods and automotive contracted as a result of the weak lira, which pushed converters to focus more on exports. This is cited as another reason why the PP market suffered less from the economic turmoil as converters in the PP market are more export-oriented, unlike HDPE pipe markets who faced a stiff contraction in their business due to cancelled state projects. .

Statistics: Monthly imports were down but impact on total imports in Jan-Oct was minimal

ChemOrbis Import Statistics reveal that Turkey’s monthly polyolefin imports were affected by the stronger dollar as volumes recorded drops starting from June particularly on a yearly basis. However, the drops in cumulative imports were not dramatic despite an almost 40% fall in the Turkish lira against the USD from early 2018. Homo PP showed only a slight drop of 4% on the year and HDPE imports declined by 10%. Imports of LDPE were almost steady, while LLDPE imports were somehow up by 9%in the first 10 months of 2018.

Expectations over the near term do not call drastic price changes although lower crude oil futures weigh on the sentiment. Many players believe that PP prices already bottomed out amid waning stocks, but see a sharp upturn unlikely in January. For PE, prices may hover at or close to the prevailing levels if American sources already depleted their stocks, participants say, depending on China ahead of the holidays in February.