by ChemOrbis Editorial Team - content@chemorbis.com
Export PVC prices out of the US continued to rise in major markets including Turkey and Egypt buoyed by strong Asian markets as well as globally tight availability which overshadowed declining upstream costs.

A US market source commented that the unusual late season demand due to mild weather and stimulus spending in China drove export PVC prices higher. Moreover, two companies, namely Formosa Plastics and Shintech are conducting planned shutdowns at their PVC plants in November.

Low inventory levels and surging futures prices reinforced the upwards trend in China during recent weeks. Acetylene-based PVC prices hit their highest levels in 5 years and came close to prices of conventional PVC. As for imports, December offers hint at new hikes although, players do not exclude the possibility that an increasing number of import cargoes to China combined with falling energy costs could limit the rise next month.

In Turkey, the import US PVC k67 range firmed up by another $10/ton on both ends compared to last week. An agent of an American producer reported, “Our most recent done deals indicated $25/ton hikes from previous weeks. We are almost sold out for November. Although it is early to project the outlook for December, we believe that US producers may sustain their firm attitude so long as the PVC trend in Asia continues to shrug off lower costs. Plus, Turkey has been facing reduced allocations from European PVC suppliers which support the firm sentiment for the short term.”

A trader commented that lack of European PVC sources may push American k67 prices close to the $900/ton CFR Turkey threshold soon. Nonetheless, buyers voiced their mixed expectations for the year end. A large scaled converter opined, “We are not interested in long distance US cargos at the moment. Moreover, we think the market will lose steam next month once activity in China calms down heading to the New Year Holiday. Prices are firmer now but if supply in Turkey eases and sellers get involved in destocking activity heading to the year end, the sentiment may soften.” Another manufacturer, meanwhile, reported looking for prompt or nearing US PVC this week and struggling to find it. 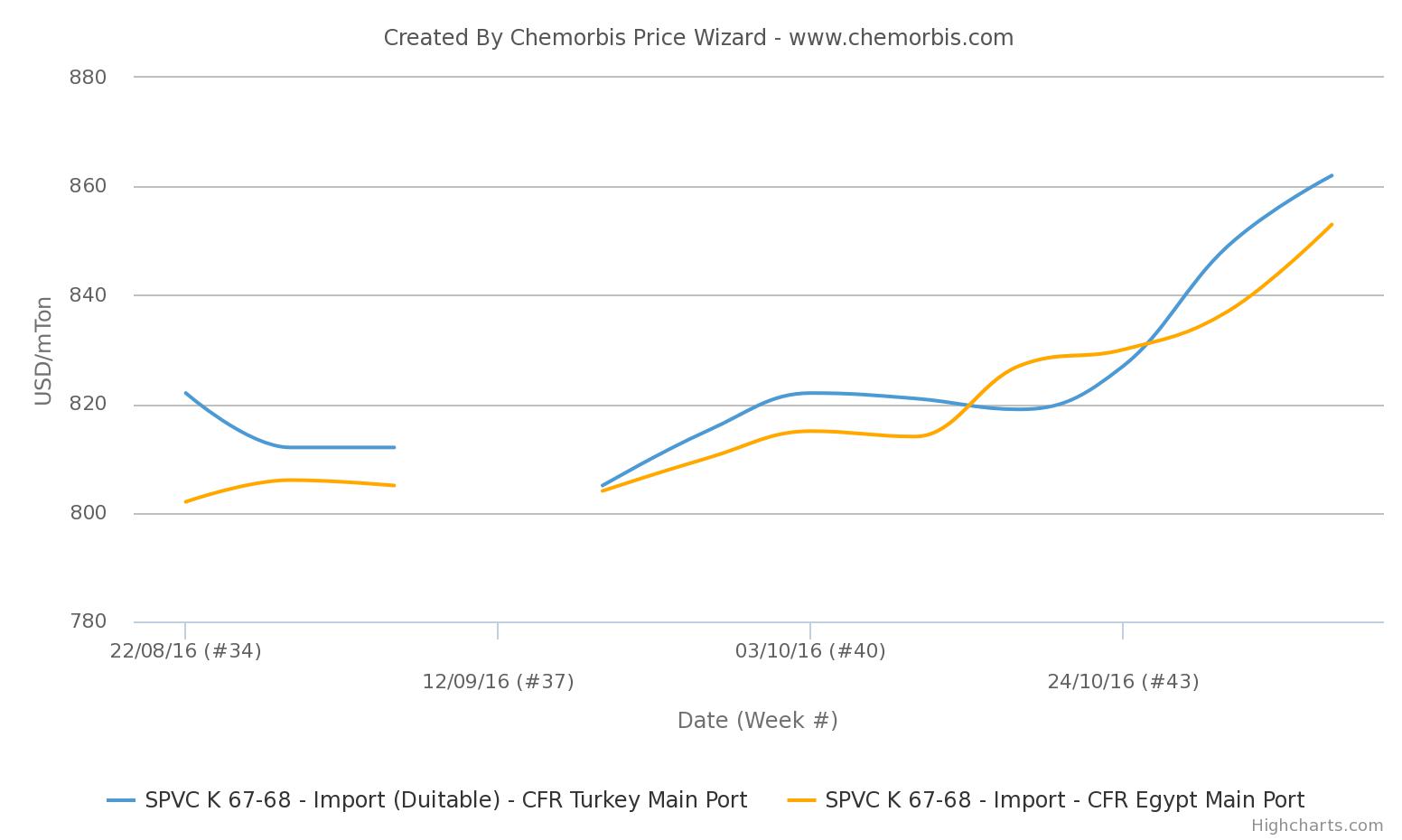 In Egypt, import US PVC offers firmed up by $20-40/ton week over week. A trader commented, “Our US suppliers are adamant at their price levels given their tight supplies. Improved demand and better margins in Asia also lend support to them.” Yet, the trader admitted that demand for US cargoes remained disappointing in Egypt due to ongoing LC problems and instability.

On the contrary to the bullish downstream PVC market, spot ethylene costs in the US plunged by 5.63 cents/lb ($124/ton) on FD USG basis since the beginning of November. A similar downturn was in place in Asia as spot ethylene costs dropped by $40/ton on CFR Northeast Asia basis in the period. Both decreases were attributed to falling energy costs ahead of an uncertain outcome from OPEC’s meeting due to be held on November 30 in Vienna.