by Merve Madakbaşı - mmadakbasi@chemorbis.com
Sellers in Asian styrenics markets have been largely feeling the downwards pressure of feedstock prices for around a month now. Spot styrene prices have been steadily declining since mid-September, prompting suppliers to apply slight drops on their prices this week.

Styrene prices slumped around 15% since mid-Sept

Spot styrene prices both on an FOB Korea and CFR China basis retained their bearish trend during this week. Styrene prices have cumulatively sank by 15% in a month, according to data from ChemOrbis, sending the FOB Korea based level to almost a 4-year low. Some players attributed these relentless drops to more-than-adequate domestic stocks in China. 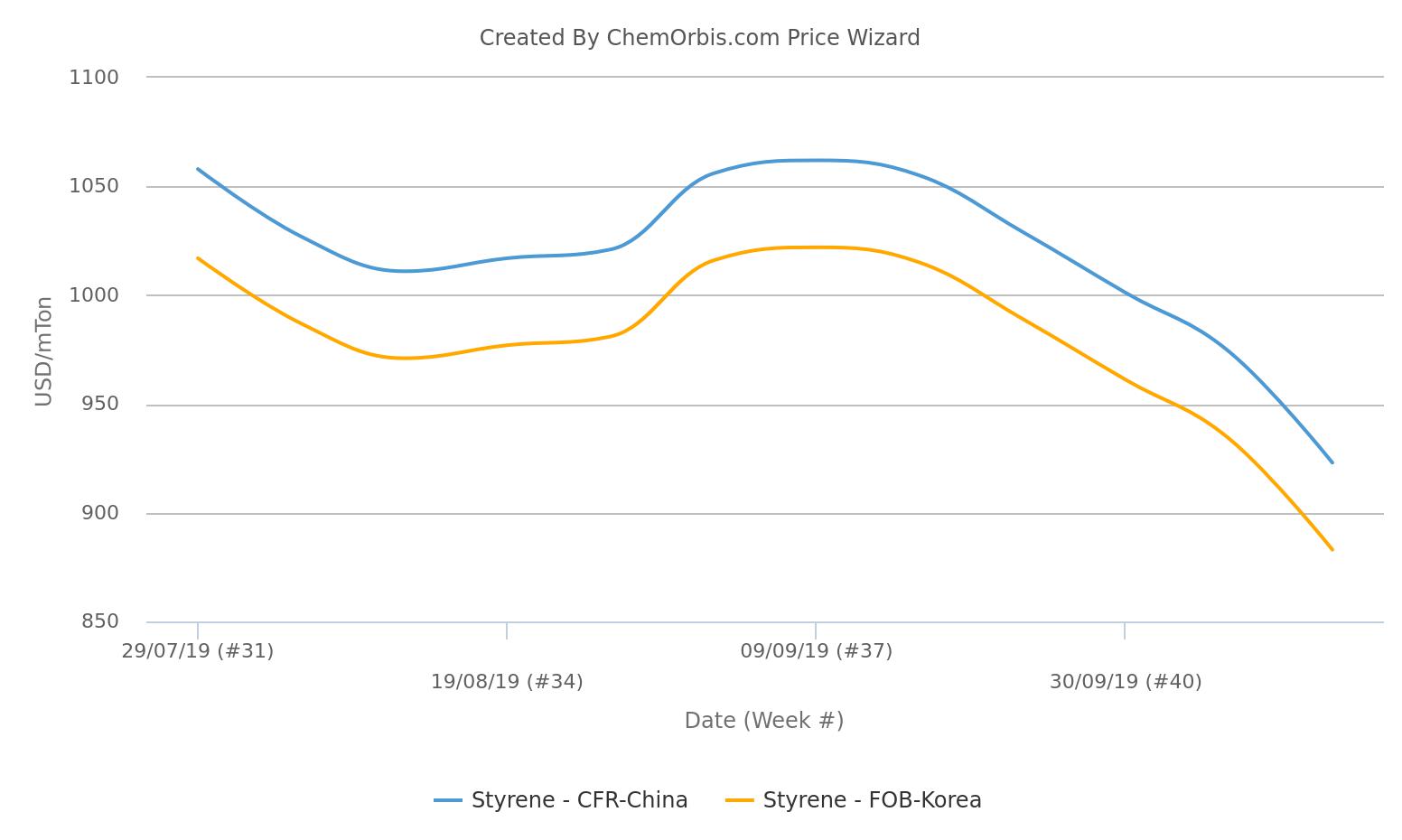 A source from a Taiwanese producer reported that they adjusted their GPPS, HIPS and ABS injection prices slightly down for new shipments considering tepid demand in the region. “The falling upstream markets including ethylene, benzene and styrene was the other factor that dragged prices down,” he further said.

A SEA producer confirmed cutting their prices by $20/ton on the week in an attempt to entice better buying interest from customers. “Weak expectations keep converters on the sidelines for the time being,” a producer source commented, pointing to the widespread “wait-see” mood.

A disposables manufacturer in Vietnam voiced his plans to maintain purchases on his needs basis since he projects to see additional price cuts in the days to come.

A Malaysian player attributed the recent softening to reduced orders from end users. “Some of our customers have slashed their purchasing volumes as they needed to lower their manufacturing rates heading to the year-end. The government policies that stipulates less plastic consumption pulled purchasing amounts down,” he opined.

The US-China trade dispute keeps Asian players on the edge

Not only the tumbling styrene costs but also uncertainties driven by the prolonged trade war between the US and China keep activities muted across the region. Some players hope to see improved demand for PS counting on possible preparations for the year-end festivities. Still, factors including projections for a slower growth in global economy, the deterioration in manufacturing across SEA countries and an ongoing contraction in China’s auto industry may continue to undermine activities in the medium term.