by ChemOrbis Editorial Team - content@chemorbis.com
Players in Asia reported that the PET market has been softening since the return from the Chinese New Year Holiday in mid-February. According to ChemOrbis Price Index, export PET Bottle prices on FOB China basis have dropped by $100/ton on average since then. 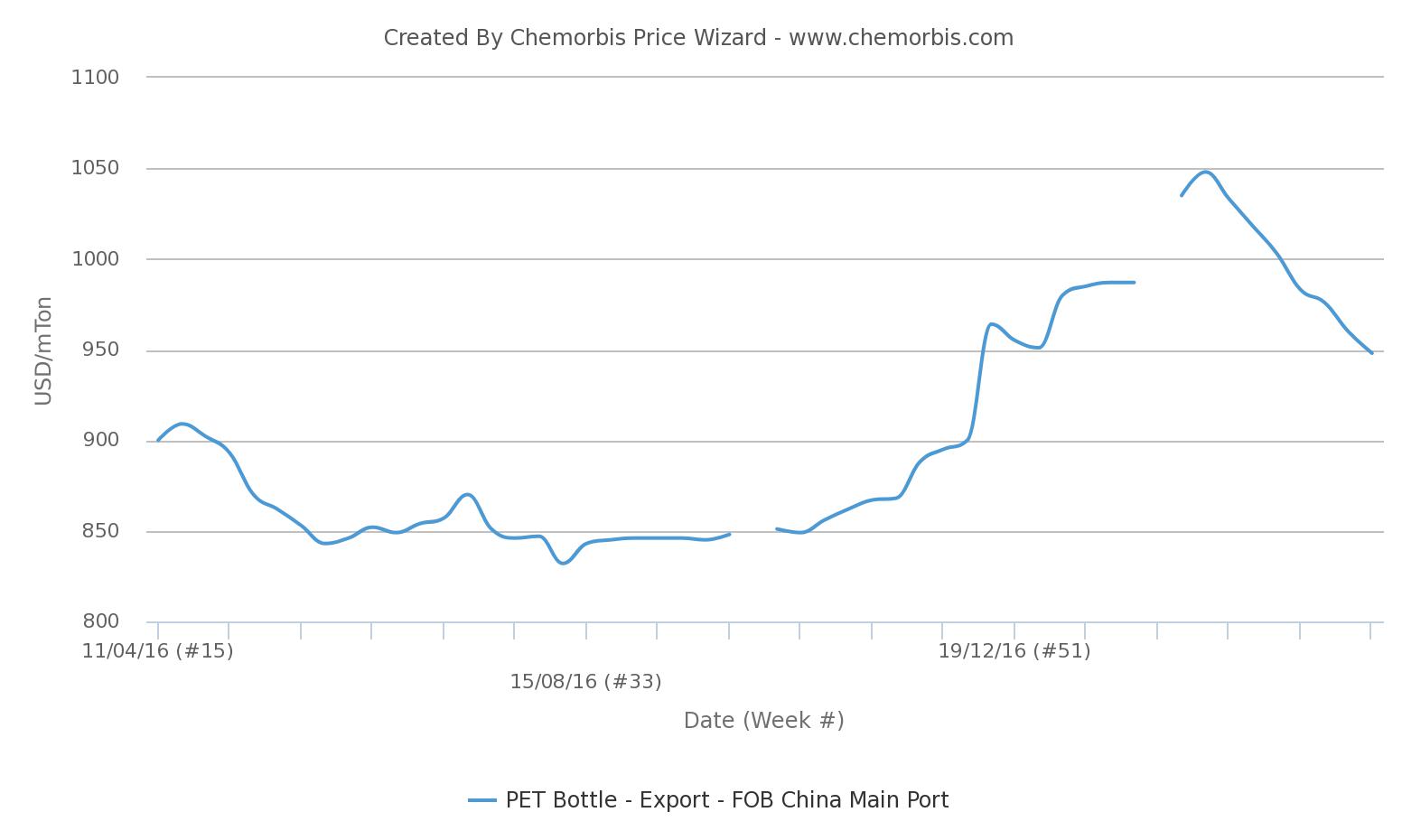 “When compared to previous week, the local market declined by CNY50-100/ton while export offers were slightly down by $5/ton. However, we had to make a cumulative decrease of more than $75/ton when compared to February. In terms of demand, the local market is performing better than exports, but the overall sentiment is not positive due to weaker monomers. Although some PTA plants including 5 million tons/year capacity will be undergoing maintenance, there are new capacities coming on stream and they will counterbalance the loss of production that stems from the shutdowns,’’ a source from a Chinese producer commented.

Market sources in China reported that Zhejiang Wankai’s new PET line has recently come on stream with 550,000 tons/year capacity whilst Hainan Yisheng, a subsidiary of Zhejiang Hengyi Group Co., will be adding two new PET lines in May and June 2017. The first 250,000 tons/year line will come online in the beginning of May while the second line with the same capacity will begin in the end of June. In addition, Jiangsu Chengxing Phosph-Chemicals Co.LTD will be adding two 600,000 tons/year PET bottle lines with an expected start-up date in Q2 and Q3 2017.

In Southeast Asia, PET offers continued to retreat as well. An Indonesian producer lowered its export offers by $5-10/ton compared to the previous level. The producer said, ”Demand for both local and export markets is rather slow as buyers are holding sufficient inventory. They also claimed that the number of their orders are lower for their end products. Locally, the rainy season has not come to an end yet either. Therefore, demand cannot revive.’’

A converter in Indonesia also blamed the weather for the ongoing weakness as the demand from beverage sector is not up to expectations. The converter received competitive offers for Indian PET at $950/ton CIF Indonesia, cash basis.

Similarly, a converter in Ho Chi Minh, Vietnam pointed out that this time of the year should be the peak season already. However, due to the changes in weather pattern, it is still cold and raining in Vietnam; hence, the demand is very slow.

For the coming days, a number of players argued that PET prices may change direction as the temperature in China is rising and the peak season should begin. In addition, the seasonal demand will emerge in Indonesia for the Eid preparation.