by ChemOrbis Editorial Team - content@chemorbis.com
In Asia, export PET bottle prices continued to increase both out of China and South Korea after hitting their lowest levels since late 2008 during mid-January and early February this year. Players were already anticipating a firmer trend following the Chinese New Year that took place between February 8-12 and in line with these expectations, Asian sellers returned to the market on a firm note.

Meanwhile, gradual improvements seen on PET demand, owing to the approaching high summer season as well as the firmer crude oil prices that recovered to rise above the $30/bbl threshold, also played a role in this firming trend.

In the upstream markets, crude oil prices on NYMEX traded near the $35/bbl threshold last Thursday while spot Asian PTA, MEG and PX prices recorded around $10-30/ton hikes during this past week. 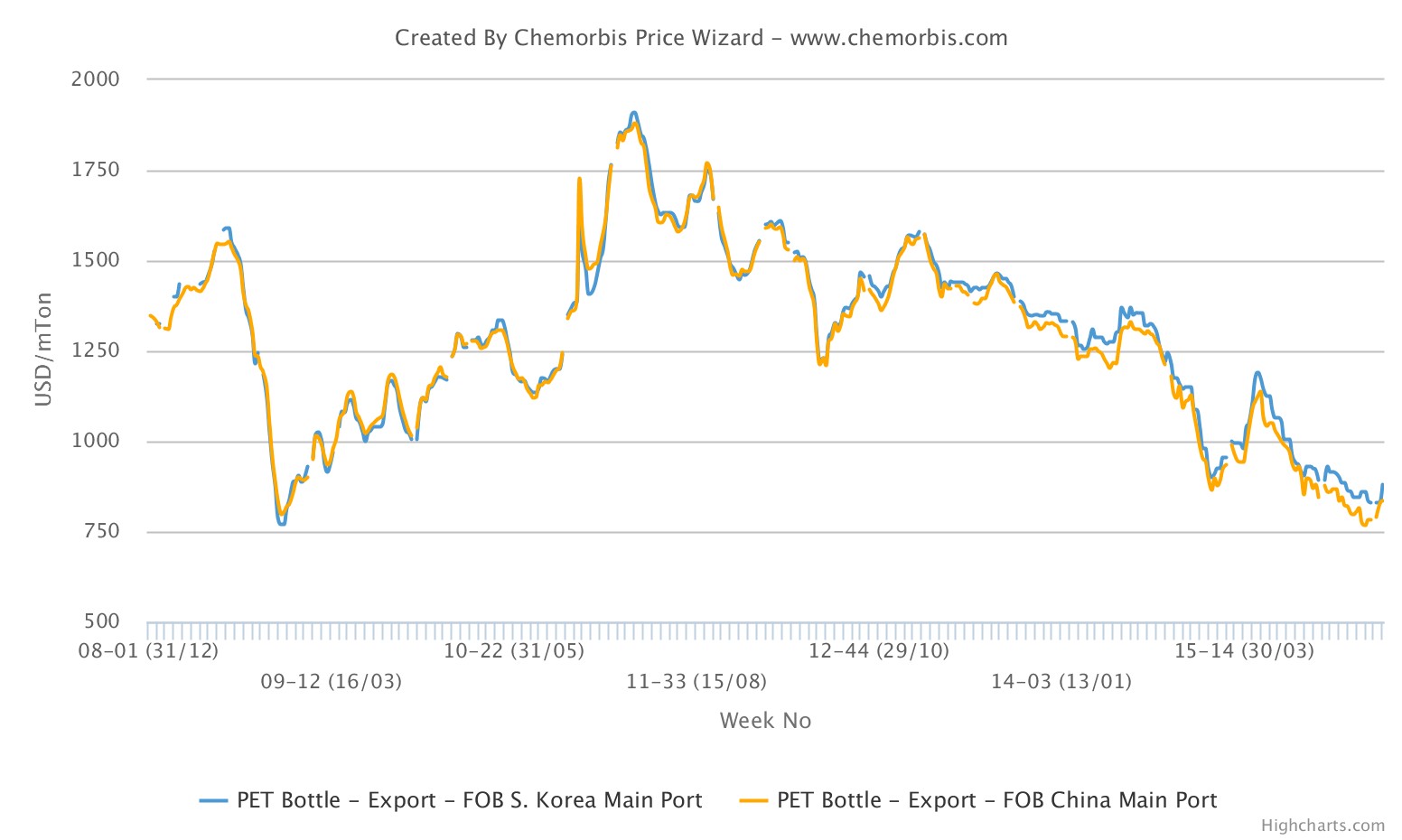 A trader operating in China, who complained that their sales volumes retreated by around 4000-6000/ton on a monthly basis this year when compared to the last few years, commented, “Demand for PET had started to recover, albeit slightly, ahead of the Chinese New Year as buyers wanted to enter the holiday with some stocks, expecting firmer prices for the post holiday period. As a result, sellers could stand a little bit firmer on their offer levels. Following the holiday, in line with expectations, the trend firmed up. The fact that the high season is approaching and the weather is quite warm in China also supported the PET market. Therefore, we believe there will be another round of replenishment as of mid-March although buyers, still feeling hesitant about the rising trend, are trying to remain cautious on their purchases.”

A Chinese producer also remarked, “Crude oil prices are currently trading above the $30/bbl threshold and we believe that it will continue to rise up. Plus, demand is better on the back of the impending high season. Considering these factors, we run our plant at full capacity and lifted up our export prices by $30/ton.”

A South Korean producer, whose prices are $50/ton higher than two weeks ago, noted that they suspended their PET offers with the anticipation of further increases in the days ahead given the firmer MEG, PTA and crude oil prices. “For now, we are monitoring the market and mulling over increases for this week. We are operating at full capacity and we are not planning a maintenance shutdown over the near term,” he further added.