by ChemOrbis Editorial Team - content@chemorbis.com
Asian PS suppliers are seeking new increases in the markets including China and Southeast Asia as well as Turkey for December. Climbing styrene and butadiene costs in the region spurred higher offers despite the volatile demand scene by the year end.

In China, import PS markets have been on a bullish trend since October. The firming gained speed once OPEC decided to cut oil output by end November as the news sent energy costs up. In response, spot styrene costs were up by $75/ton on FOB Korea basis, while butadiene costs amidst good demand from the tire industry rallied $130/ton with the same terms since December started. 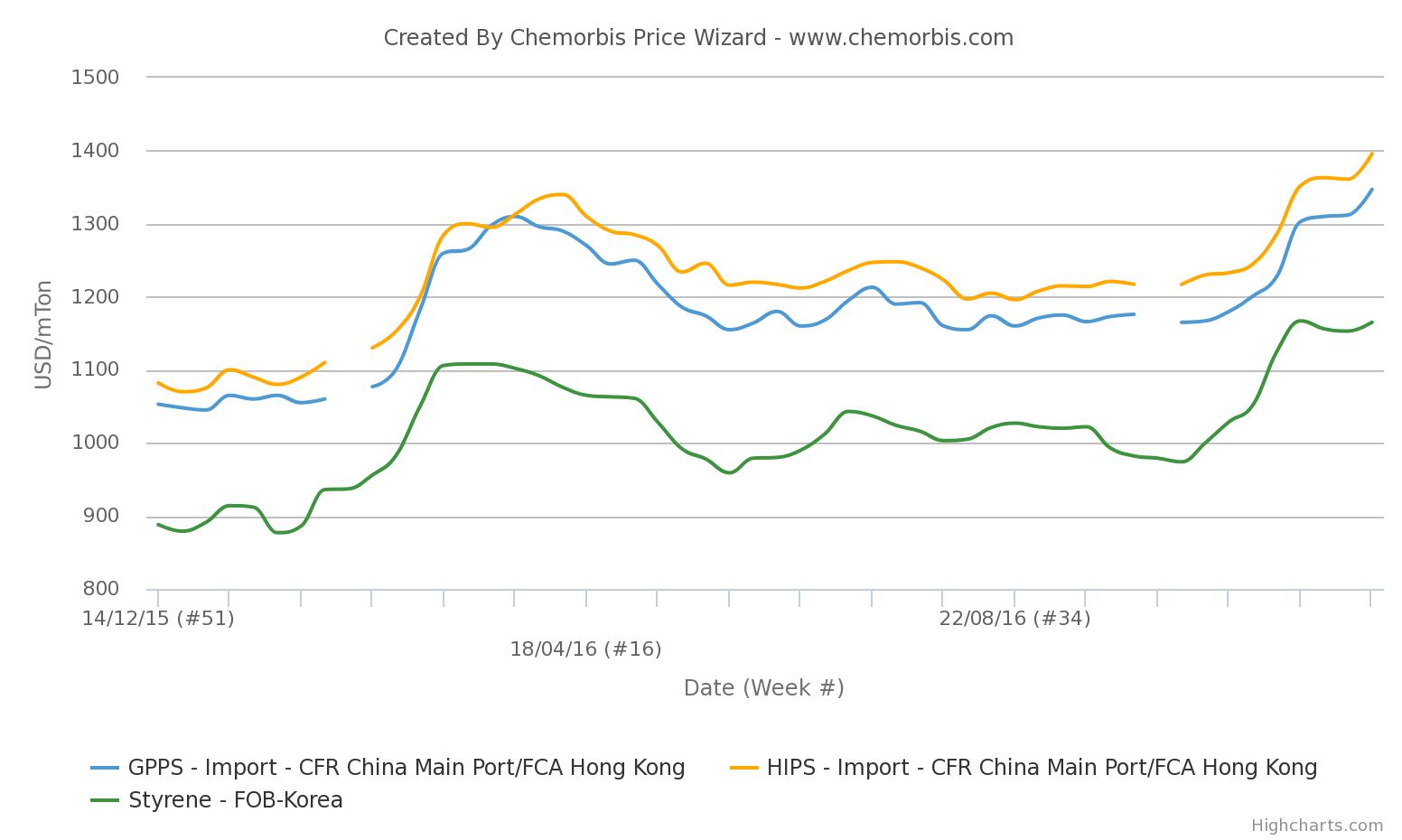 A PS producer based in China noted, “One of the major styrene producers in northern China is currently facing some production problems. Spot styrene supplies are tight in China.” Another supplier also confirmed, saying, “Acceptance from buyers is low for higher prices but the market is likely to remain firm until end December. Europe’s Lyondell Chemical Co declared a force majeure today on its styrene output (680,000 tons/year), while China Yuhuang Petrochemical is running its 200,000 tons/year styrene unit at lower rates due to a catalyst issue. Meanwhile, increased demand for tires following a transportation rule for trucks in China drove butadiene costs higher.”

A Taiwanese producer issued increases of $20-40/ton week over week for GPPS and HIPS to China and SEA, saying they don’t feel sales pressure. “Buyers are sourcing their needs mostly, while demand for GPPS is better than for HIPS. We need to adjust our prices given rising styrene costs but customers are resisting our recent levels.”

Another Taiwanese supplier said, “We concluded smooth sales with both traders and end users for HIPS and ABS. We expect the market to remain bullish until end December as the rising upstream chain since October will have an impact on the market for a while more.”

A Hong Kong based trader reported receiving an increase of $20/ton for GPPS and $30/ton for HIPS for a Taiwanese origin this week. He commented that demand was performing normally while the market rose too much.

Meanwhile, a manufacturer in the Philippines stated that he is in no need of material as he is covered until January. “We believe PS prices would not rise much further as December is a traditionally slow month. Moreover, a lot of factories will be down for Christmas Holidays, so the market may not digest additional hikes. We will adopt a wait-and-see stance for January to gauge the price direction.”

According to a trader in Vietnam, prices will not ease back until after Chinese New Year as demand for ABS and PS is quite healthy in China despite the year end.”

In Turkey, import PS prices were on an increasing path since mid-November under the upwards pressure of the rising upstream chain. South Korean PS prices were up $40/ton from last week, while Vietnamese and Pakistani GPPS prices posted monthly hikes. “We revised our prices up based on our surging replenishment costs. We are receiving more inquiries particular for GPPS as availability diminished,” noted a trader.