by Merve Sezgün - msezgun@chemorbis.com
In China and Southeast Asia, import PS and ABS prices have continued to move lower due to a combination of virus-hit demand and plunging feedstock costs. Although industrial activity appears to be increasing amid fewer cases in China, overall demand across Asia remains weak, players noted.

“With most Southeast Asian countries locked down, our export business has taken a hit. Tumbling oil futures, meanwhile, are pushing feedstock costs lower. Buyers are placing lower bids even after our recent price reduction,” a Southeast Asian producer commented.

Data from ChemOrbis Price Index reveal that the weekly averages of GPPS and HIPS injection prices on CIF China/SEA basis have fallen to the lowest levels since March 2009. Import ABS prices on similar terms, meanwhile, have hit a four-year low. 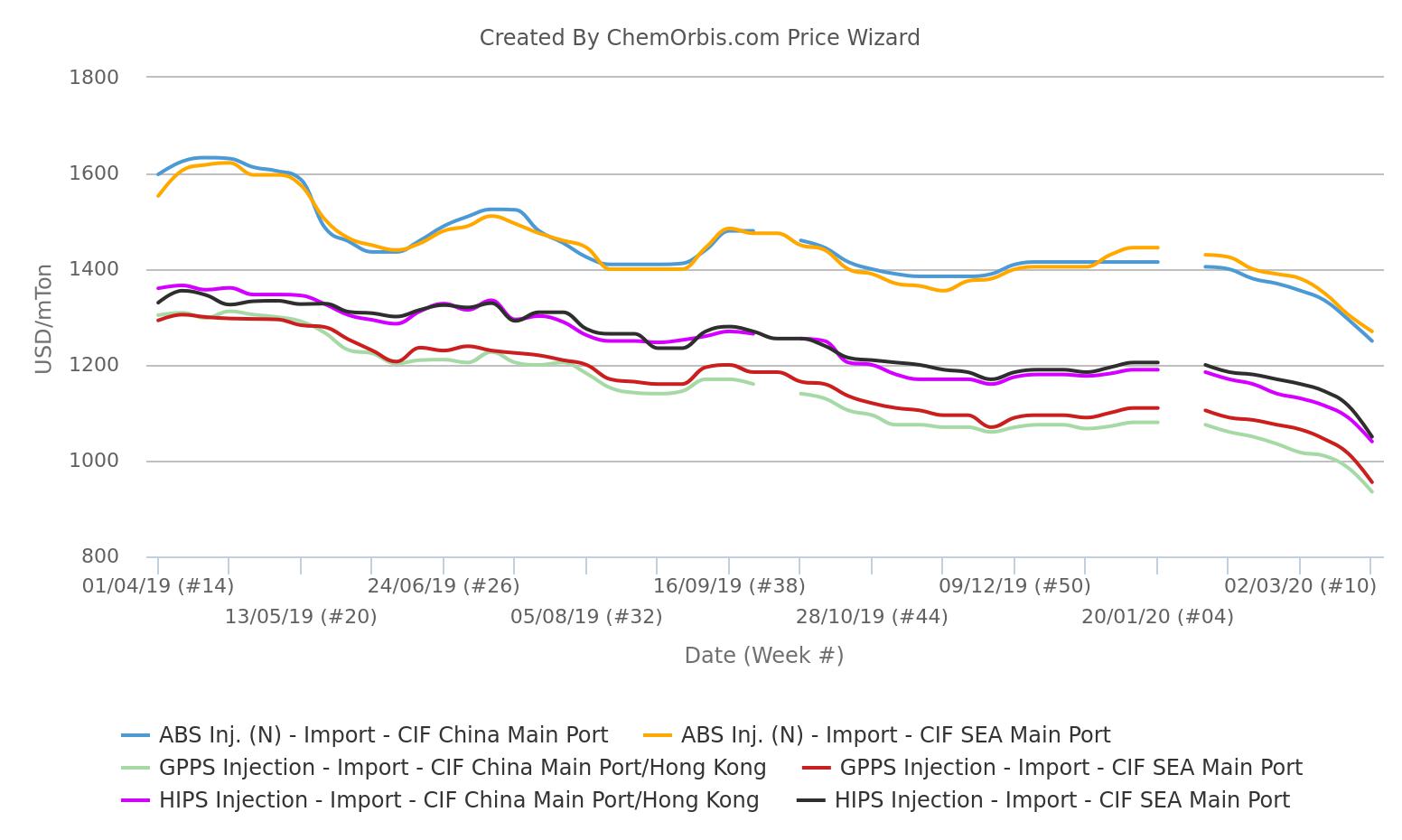 How much have PS, ABS lost since early 2020? How about oil and feedstocks?

According to ChemOrbis Price Index data, the weekly averages of GPPS, HIPS and ABS injection prices on CIF China/SEA basis are down by around 10-12% when compared to early January levels.

On the other hand, much larger losses have been recorded in the upstream markets.

Data suggest that WTI crude oil futures on the NYMEX have witnessed a significant decline of 61% from early January. Spot styrene and butadiene prices on CFR China basis, meanwhile, have dipped around 36-37% over the same period.

Players discuss what lies ahead for PS and ABS

Most players expect the weak sentiment to continue in the near term due to plunging costs and COVID-19.

“We think that a sustainable price recovery is unlikely for PS, given the impact of the coronavirus outbreak on the global economy. Many countries are taking unprecedented measures, implementing lockdowns to slow the spread of COVID-19. These are hampering global trade,” a source at a Taiwanese producer said.

A regional trader also commented, “Demand for ABS is likely to remain weak as it is mostly used for manufacture of various exterior and interior parts in commercial and passenger vehicles. The outbreak has hit the auto industry hard.”

According to others, meanwhile, there could be a bright spot in Southeast Asia’s PS market with Ramadan - the Muslim fasting month - approaching. “We are looking to some demand to return in April as Muslim countries will start the fasting month of Ramadan,” a regional seller opined. Both Indonesia and Malaysia have large Muslim populations.

Another factor that gives some hope is the fact that China is emerging out of COVID-19 with fewer cases. Players report that business activity is improving as the country is returning to normalcy. Following intense quarantine measures for two months, Chinese officials ended the lockdown in Hubei on March 24.