by Merve Madakbaşı - mmadakbasi@chemorbis.com
PS prices in China and Southeast Asia have been on a firm trend following slight fluctuations during the first half of January amid volatile feedstock costs. Some pre-buying activity that took place ahead of Chinese New Year holiday combined with higher styrene costs in the region mitigated the impact of weaker energy complex on downstream PS market.

Spot styrene prices on FOB Korea basis have gained around $25/ton (almost 3%) since January started, according to data from ChemOrbis Price Wizard. They pointed to their highest levels since mid-October, 2019, data suggested.

The market was mainly propped up by relatively limited supplies in the region amid lower operating rates at certain styrene makers. “Styrene gave a thin response to the drops in crude oil futures over the week as availability was not as comfortable as before,” noted players. 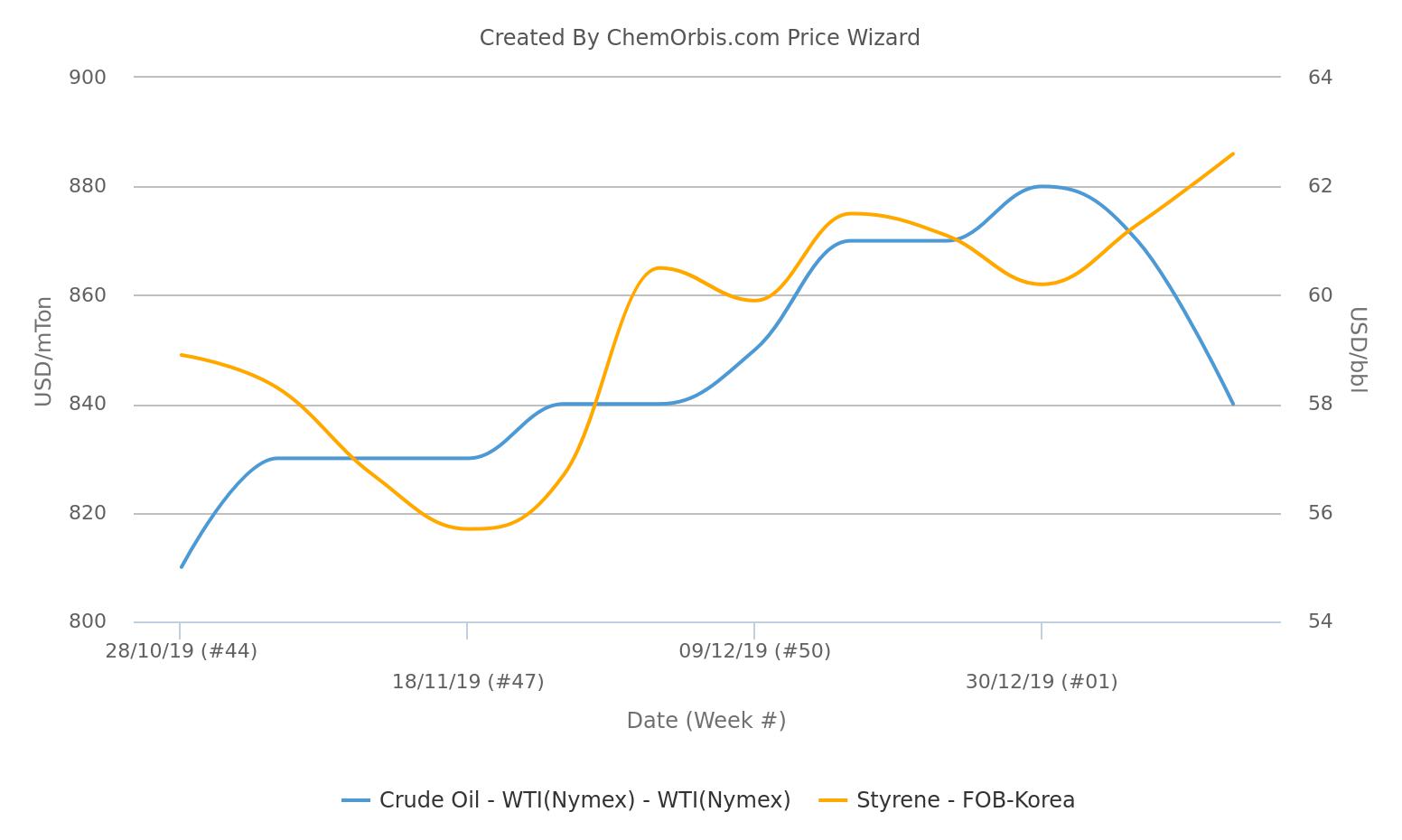 A converter in Malaysia reported, “We purchased some material in a bid to be covered in February as we are not sure about whether or not the market will rise in the aftermath of the long holiday.” Southeast Asia has a significant Chinese population while public holidays will take place in Vietnam, Singapore, Malaysia, Indonesia and the Philippines for various durations during the Chinese New Year holiday.

A source from a SEA PS producer marked, “We have already sold out our January and February allocations and we are unable to cater demand for now. We prefer to hold back our March offers as prices may move further north after the holiday in China in case styrene prices manage to retain their firmness.”

Buyers in Vietnam opted to secure some cargos out of their fears that prices may move up more in the post-holiday period, according to a trader, who lifted his PS offers by $10/ton from last week.

As can be seen from the ChemOrbis Snapshot below, import GPPS and HIPS prices firmed up by around 2-3% ($30-35/ton) in China, while they rose by up to 5% ($65/ton) in Southeast Asia in the last two weeks.

The recently signed “phase one” trade deal between China and the US is foreseen to support the market sentiment to some extent over the coming term. The agreement marked a pause in almost two-year long dispute that rattled global economies.

As per the agreement, China will boost purchases of US products in the fields of energy, agricultural and manufacturing goods by at least $200 billion over the next two years. The US will halve the tariff rate of 15% on a $120 billion worth of Chinese goods.

Factors that cast a cloud on medium term

On the other side of the coin, the holiday lull is likely to be felt soon as regional players will be leaving their desks for festivities starting from next week.

“Attempts for additional hikes may probably be confronted by waning demand soon,” said players in China, where local PS offers were trimmed in response to buyers’ resistance this week. Participants will also need to gauge the impact of the upcoming new styrene capacities as well as planned turnarounds in the region over the medium term.