by ChemOrbis Editorial Team - content@chemorbis.com
In Italy, January PVC prices are suggesting decreases of up to €65/ton while bearish February expectations stemming from the downward trend across upstream markets are causing buyers to stick to the sidelines for now. 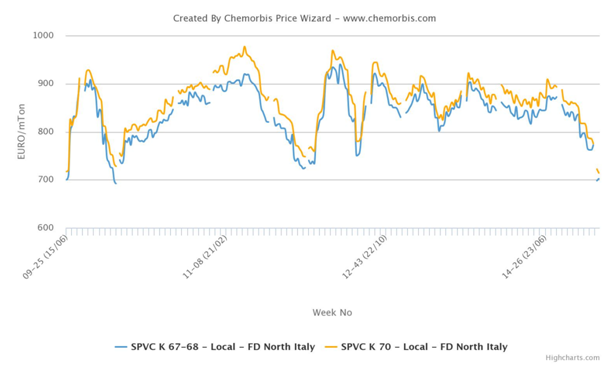 A West European producer is giving offers for their January gentlemen’s agreements with decreases of €50/ton from last month. A producer source said, “We are planning to reflect less than half of the ethylene drop to our prices in order to recover our margins. Meanwhile, demand is weak since buyers are waiting to see if PVC prices will lose further ground.”

An agent of another West European supplier reported concluding some deals with decreases of €65/ton from last month. According to the distributor, the market is calm as buyers are confident about seeing further decreases in February.

Indeed, buyers remain cautious about their purchases due to bearish expectations stemming from retreating upstream markets, with spot ethylene prices dropping around €70/ton from early January levels to hit the €700/ton threshold on an FD NWE basis.

A compounder reported, “We haven’t made any purchases yet as we think that sellers might concede to discounts larger than €60/ton in the upcoming days. We expect PVC prices to decline further in February in line with decreasing costs.” Another compounder made some purchases €60-65/ton below last month. The buyer said, “Sellers, who initially lowered their prices by €50/ton, conceded to slightly larger discounts of €60/ton this week. We expect the downward trend to remain in place next month.”

In the import market, a converter bought Egyptian k67 at €650/ton CIF, 90 days deferred payment. The buyer thinks that PVC prices might reach the €600/ton threshold in February.