by Manolya Tufan - mtufan@chemorbis.com
China’s import ABS market has been on a downward trajectory for four consecutive weeks due to reduced demand amid a year-end lull and falling styrene prices. Meanwhile, Southeast Asian markets have followed suit, albeit at a relatively slower pace.

China sees larger drops than SEA; prices down by around 6% since early Dec

According to ChemOrbis Price Index, the weekly average of ABS prices on CIF China basis has recorded a cumulative drop of $150/ton or more than 6% since the downtrend kicked off as of early December.

Meanwhile, ABS prices on CIF SEA basis have seen a smaller drop of $85/ton in the past three weeks.

China trades below SEA for the first time since April

China’s import ABS market started to trade below Southeast Asia for the first time since early April because the magnitude of decreases was larger in the former market. China’s premium over Southeast Asia gradually declined after touching $150/ton by H1 November and evaporated as of early December, ChemOrbis Price Index revealed. 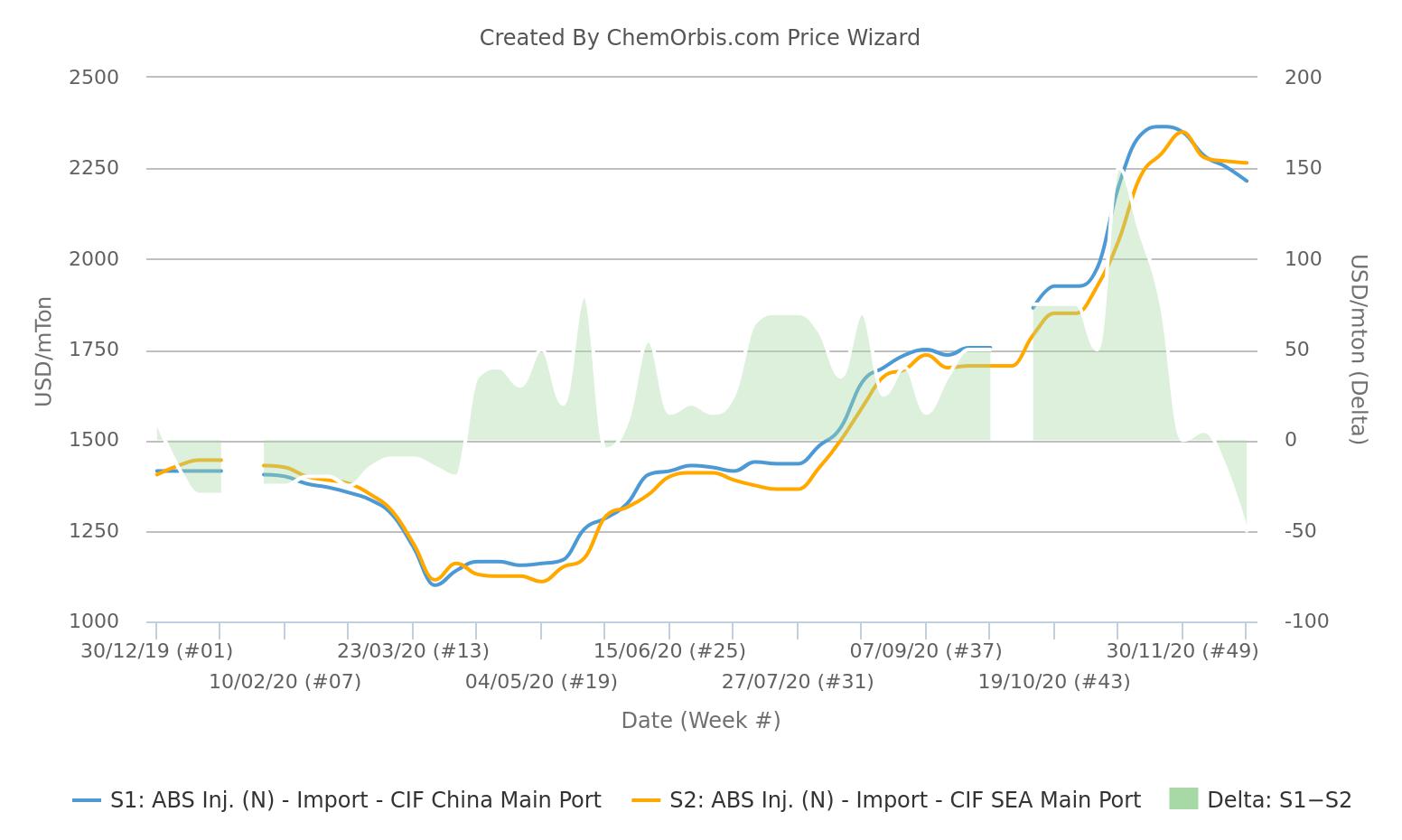 Suppliers applied drops on their offers, citing weaker styrene prices and fading demand in China. Chinese cities faced restrictions on electricity use due to the colder temperatures as a shortage of coal led to a surge in power demand. This along with the environmental inspections prompted downstream factories to shut or lower rates, which curbed demand for ABS cargos further.

Prices are believed to have further room to go down with weak projections for demand and an expected supply relief across the region.

Although Southeast Asian markets remain under downward pressure from China, soaring freight rates are likely to keep decreases in check. Logistics issues may not be resolved until mid-February 2021 amid a lack of shipping vessels and staff shortages at ports.

Converters have already curbed purchasing volumes due to hefty hikes in the past months. Higher freight rates may cushion the unpromising demand and prevent dramatic declines in Southeast Asia, players argued.

Lower feedstock prices were cited as one of the key factors driving the market down. Spot styrene prices in Asia resumed decreases following a brief rebound in the previous week.

According to ChemOrbis Price Wizard, spot styrene prices on FOB Korea and CFR China basis were down by around 16% in the past four weeks to hit their lowest levels in the past 2 months.

Similarly, butadiene prices on CFR China basis fell by $250/ton in the same period to hit a 2-month low.