by ChemOrbis Editorial Team - content@chemorbis.com
Local PVC prices inside China have been on a rising streak since the first half of June, both for ethylene based and acetylene based PVC. Prior to the mid-Autumn festival at the end of this week, further increases were implemented on local prices and most players commented that they expect the market to remain firm in September.

A trader in South China said, “Local prices for both ethylene based PVC and acetylene based have risen compared to last week. We are entering the peak season now for China. There are some large manufacturers showing up in the market this week to replenish material. These buyers had low inventories and they have helped to bring down the sellers’ inventories. At the same time, environmental inspections are continuing now in the southern part of China and therefore, we expect supplies from the region to be reduced. In addition to these factors affecting the market, the government has implemented new regulations on transportation. Vehicles with six axles are now allowed to carry a maximum of 49 tons instead of 55 tons. This will cause transportation rates to rise once it comes into effect on September 21. Consequently, some buyers are purchasing ahead to stock up a bit before the regulation begins. We expect the market to remain firm in September.”

Another trader added, “Inventory at the end users is on the low side. Recently these buyers came back to the market to replenish material even though they buy on a needs-only basis. We feel positive about the outlook for the construction sector, especially for PVC pipes. At the same time, we expect some of the PVC producers to cut operating rates two months from now because of the winter.”

A manufacturer of toys and boxes commented, “We received an offer for PVC on Tuesday and by Wednesday the seller had already closed their offer. Unlike past years when prices would drop in August, this year, prices have been on an upward trend for the last few months. Current import ethylene based PVC offers are standing at their highest level of the year. From the increases we have seen since last month, we expect Formosa to announce around a $20-30/ton increase on their offers for next month. New import offers, however, are not expected until next week because of the mid-Autumn festival taking place this week.” 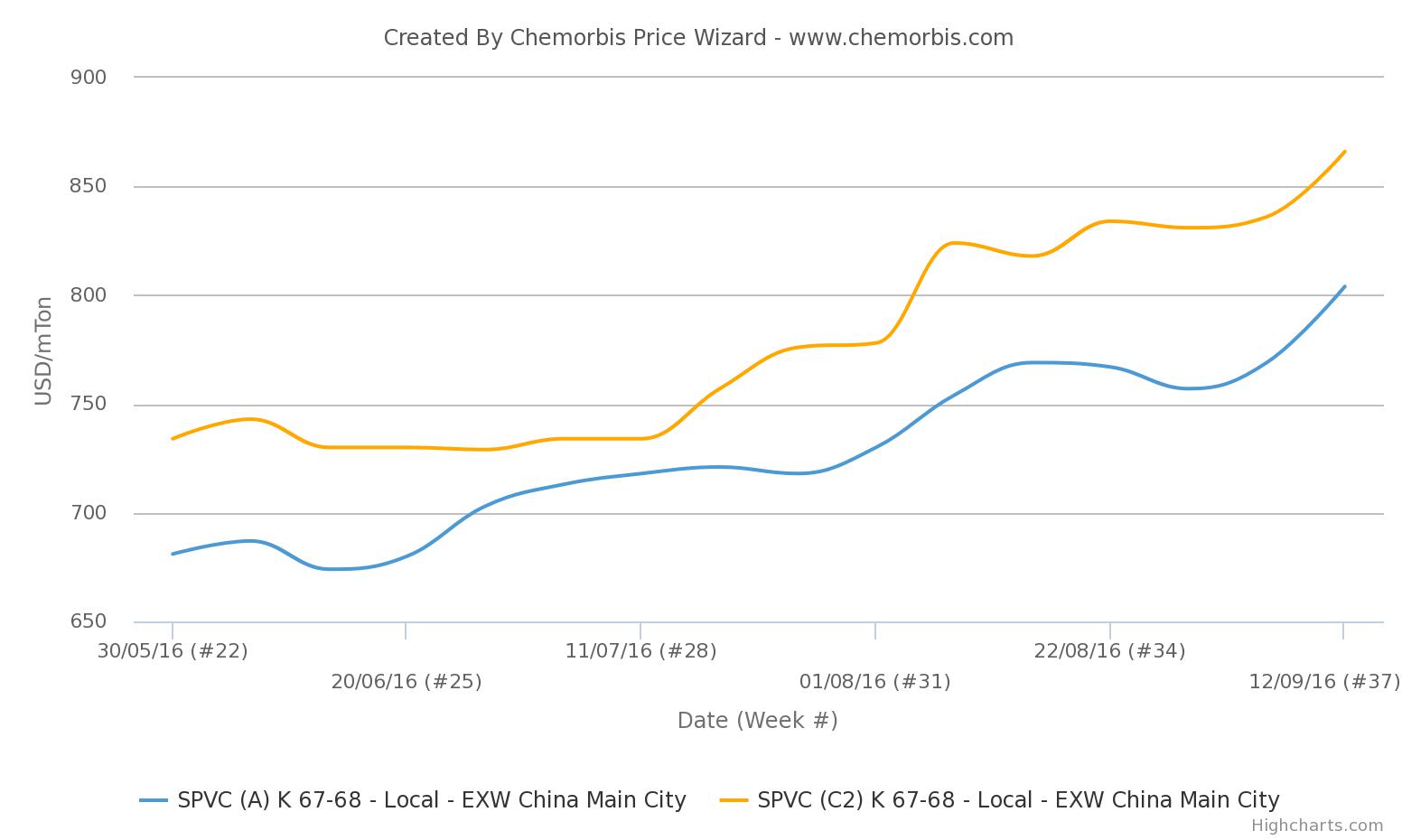 A source at an acetylene based PVC producer in East China reported, “Local prices are firming up for two main reasons. The first is that the price of coal is surging and this is pushing PVC costs higher. The second is that new regulations were announced that prohibit vehicles from being overloaded. This is expected to push up transportation costs. Also, we have seen demand pick up in the East and South following the G20 Summit. We expect the September trend to be stable to firm.”

A source at a different acetylene based producer said, “We implemented another increase of CNY50/ton on our local offers on Tuesday. We had raised prices before that by CNY100/ton and buyers purchased some materials at that level. Due to the holiday, we could not judge the response to the latest increase.”