by Abdul Hadhi - ahadhi@chemorbis.com
Vietnam’s lockdown to combat the spread of COVID-19 has created confusion in the country’s polymer markets, with uncertainty pushing local PE prices to fresh lows.

Following the lead of countries such as Malaysia and the Philippines to combat the spread of COVID-19, Vietnam imposed a two-week ban on all but essential services from April 1. All flights and public gatherings have also been suspended.

PE market players - who had noted better demand in Vietnam compared to other Southeast Asian countries before the lockdown - now report weaker sentiment.

“The government has announced a lockdown but the guidance is not clear. As many converters are not sure if they must stop producing or if shipping will be blocked later, they don’t want to replenish material at the moment,” a local trader explained.

Expressing a related worry, an end product maker said if the government stops delivery between cities, his firm won’t be able to deliver to customers in other cities. “We don’t want to buy more material as there might be no demand in the next few weeks. We might wait for 2-3 weeks before thinking about replenishing material,” he said.

Demand has also taken a hit.

“As the country is under lockdown, many customers don’t want to buy anymore and some are even cancelling orders or asking for delayed shipment,” a source at a domestic producer said. The source added that some of their customers produce material for factories which have been temporarily shut as part of anti-COVID measures. As a result, customers have to reduce operating rates as well.

Among carmakers, Toyota Motor Vietnam and Ford Vietnam have halted production. PE and PP is used in a variety of applications such as car bodies and electrical insulation while PP is used in vehicle bumpers and carpet fibers. Others such as the Dung Quat refinery are mulling stopping production amid a sharp drop in demand.

With demand dwindling as a result of social distancing measures and much reduced operating rates, PE prices have taken a big knock.

In March, locally-held prices of LDPE, LLDPE and HDPE film fell 6%, 7% and 6% respectively to $1066/ton, $934/ton and $917/ton on FD Vietnam basis - based on the weekly average data from ChemOrbis Price Index. At these levels, LDPE is at its lowest since January 2009 while LLDPE and HDPE prices haven’t been this low since ChemOrbis started compiling data in late 2008. 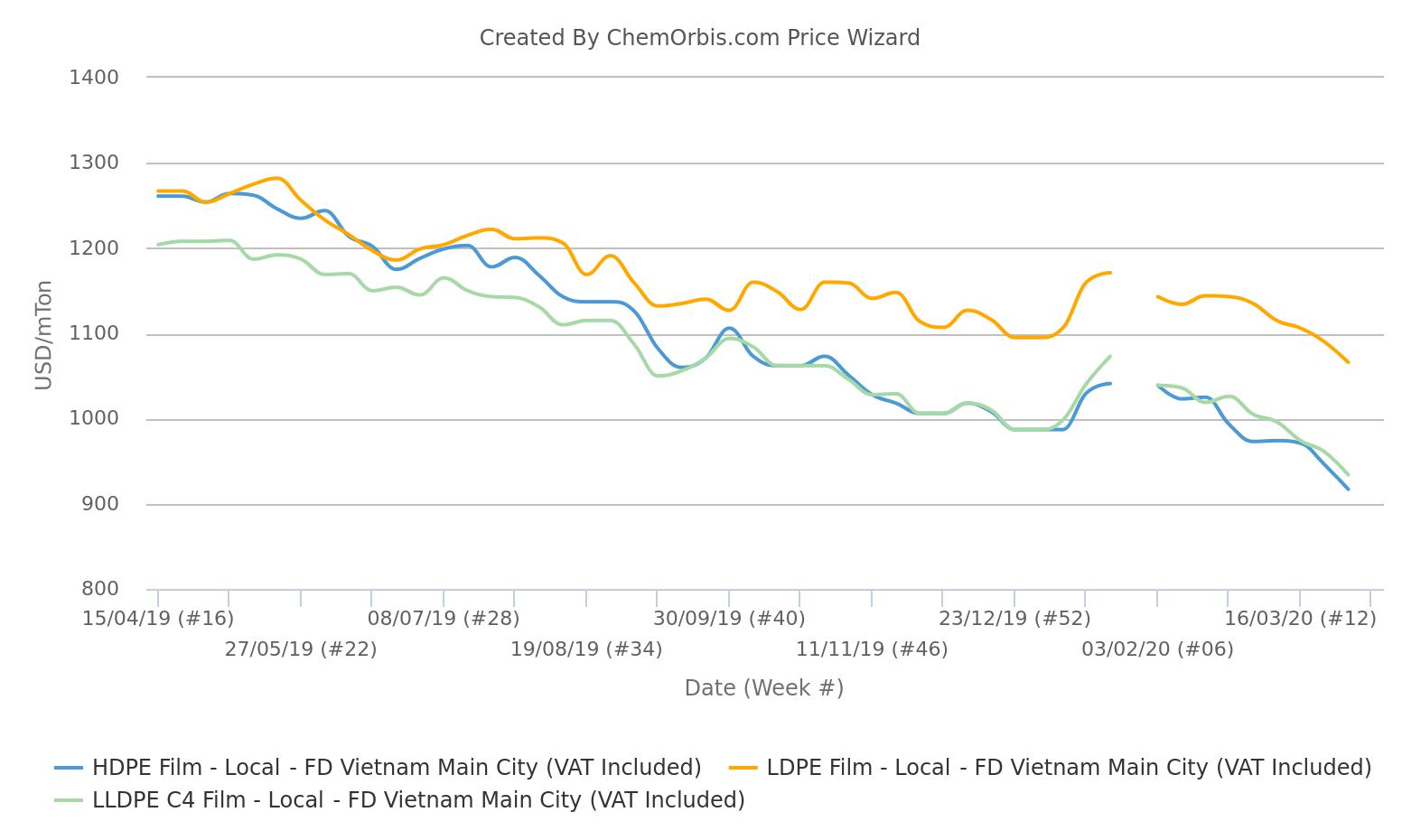 However, market players believe there is room for prices to fall further.

“There is a big drop in both local and import prices but people are not interested in buying. Prices can still fall further in the next few weeks,” a Vietnamese trader said. The trader added that she only managed to sell five tons of polymers last week which was the lowest level she has ever sold.

Some went even further. A source at a local producer expects demand to remain weak for the next few months as several companies in Vietnam rely on exports. And export demand has been dropping as the number of countries implementing lockdowns increase due to the rapid spread of COVID-19.