by Merve Madakbaşı - mmadakbasi@chemorbis.com
Turkey’s locally-held polyolefin markets have slipped to multi-year lows in November as local resellers have been trying to clear their stocks before the new year kicks in. The bearish import markets and persistently tepid demand formed the other factors that pulled local PP and PE offers visibly down.

Softening started back in April-May

The local PP and PE markets have followed a weak trend for the most part of 2019 as tough economic conditions amid liquidity issues kept purchasing volumes modest on the side of buyers. Falling prices of import cargos also contributed to the downwards trend for locally-held materials in the last couple of months.

“Several PP and PE converters purchased beyond their needs d
uring a short-lived recovery in prices driven by Aramco attacks back in mid-September,” noted a seller while explaining the reasons of muted activity in the recent weeks. 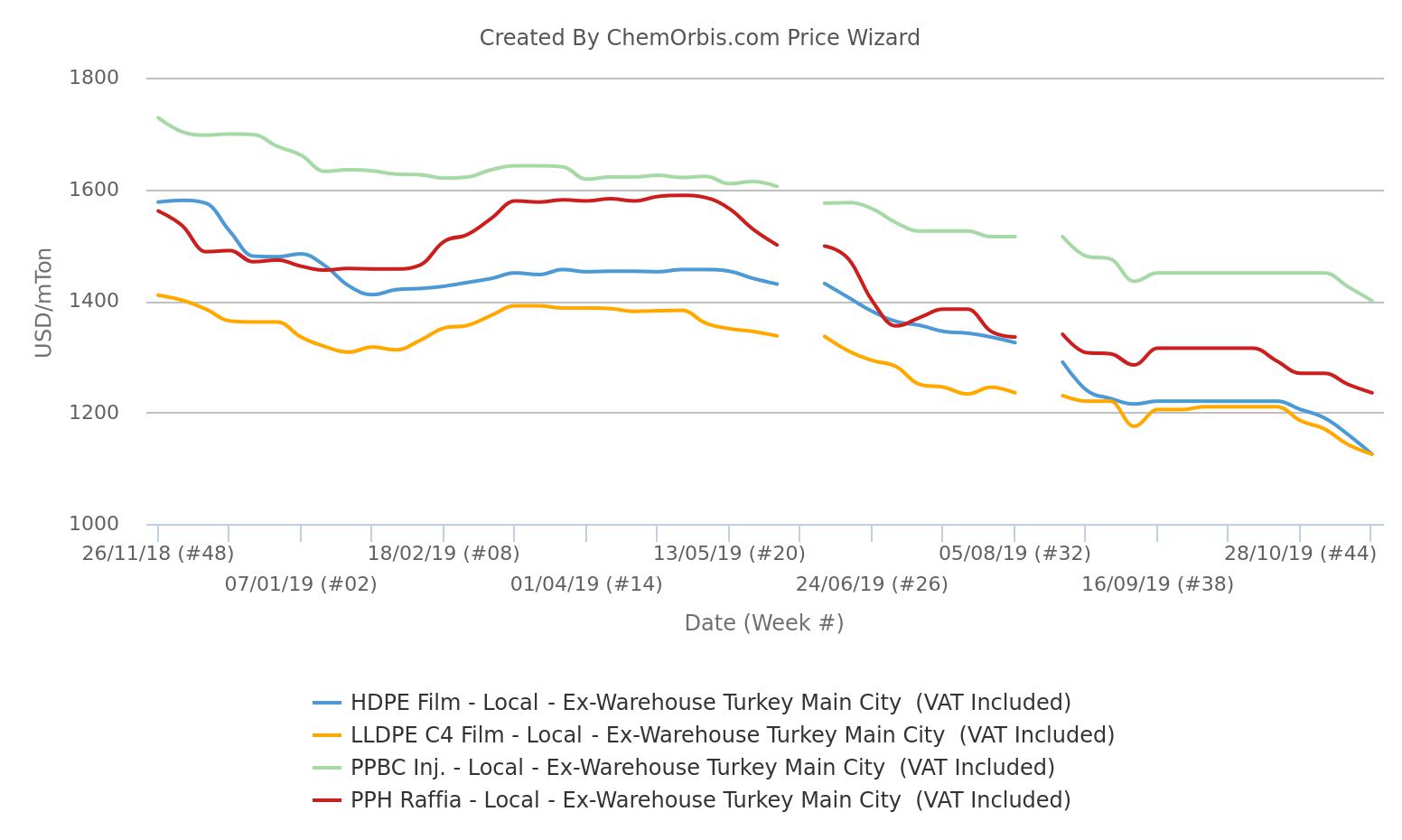 More distributors become open for negotiation on their prices not only due to reduced buying appetite but also based on falling import prices in tandem with global PP and PE markets. “We need to melt our stocks during the final months of the year. Activity remains thin even after our consecutive discounts, however,” lamented a distributor.

HDPE and LLDPE trade on par, both at more-than-a-decade low

Unlike in LDPE, for which less pressure from supply kept erosion in check, HDPE and LLDPE offers posted sizeable drops in total.

The prevailing prices point to the lowest levels in around 11-12 years, according to the weekly average data from ChemOrbis Index. Prices for both products were down by 7% in a month. Moreover, their discount to LDPE reached as high as $190/ton from $100/ton a month ago.

“Abundant supplies and rapid decreases for import cargos coupled with sellers’ eagerness to destock led to steady price cuts,” a manufacturer said. Still, activity was considered a bit better for prompt materials since many buyers shied away from securing long distance cargos heading into the year-end.

The local PP raffia market neared the $1200/ton inc VAT threshold on the low end this week amid gradual discounts from distributors that have been in place since November started. PPBC inj. offers already broke below $1400/ton last week.

On a weekly average, prices for both products are indicating a drop of around 3% ($35-50/ton) when compared to the beginning of this month, data from ChemOrbis Index suggest.

“Demand has been subdued particularly for PP raffia in the wake of ample supplies and seasonally low end product demand for sack,” Turkish distributors concurred.