Ethylene prices rise in Asia and US, fall in Europe

by ChemOrbis Editorial Team - content@chemorbis.com
Spot ethylene markets have been tracking divergent directions in Asia, Europe, and the US since mid-November, according to weekly average prices on ChemOrbis Price Wizard.

In Asia, spot ethylene costs on CFR FEA basis surged around $165/ton since the middle of November to be currently reported at about $1145/ton with the same terms. Higher spot prices were led by healthy demand in China, particularly from styrene producers while the increasing crude oil futures following OPEC and non-OPEC countries’ decision to lower production have also supported the firming sentiment in the spot market. On December 13, NYMEX January crude futures closed 15 cents higher to settle at $52.98/barrel.

In the US, spot ethylene costs have been supported from production outages recently in addition to stronger crude markets. Spot prices rose over the past week after news that Dow Chemical’s cracker in Plaquemine, Louisiana faced a power outage which caused a brief shutdown right after the restart in late November. The cracker had been offline for around two months due to expansion works. For now, it is unclear whether the plant has returned to production or not.

Meanwhile, US’ Formosa is expected to halt production its No. 2 ethylene plant at Point Comfort, TX for maintenance in January for 40-60 days. The 816,000 tons/year plant was initially planned to be shut in September.

However, in Europe, ethylene costs on FD NWE basis have been on a softening trend since late October in line with the lengthening supply levels following the restart of many crackers in the region. Recently, Ineos resumed production at its steam cracker in Rafnes, Norway. The cracker was shut in early October due to an outage after a fire at the compressor, according to market sources. The Rafnes cracker has a production capacity of 560,000 tons/year of ethylene. In addition, Hungary’s MOL restarted its Tiszaujvaros cracker and lifted the force majeure on the unit in late November. The Tiszaujvaros cracker can produce 250,000 tons/year of ethylene.

On the other hand, some European players opined that the recent gains in Brent crude oil futures as well as the increasing naphtha costs in the region may provide some support to the ethylene market in the days ahead. On December 13, ICE February Brent crude was up 3 cents to settle at $55.72/barrel. 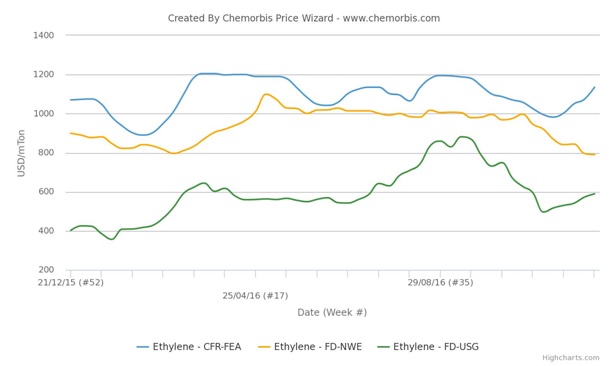 Meanwhile, ChemOrbis Price Wizard also showed that the spread between spot prices for ethylene in Asia and Europe has widened recently to the highest level since mid- March. 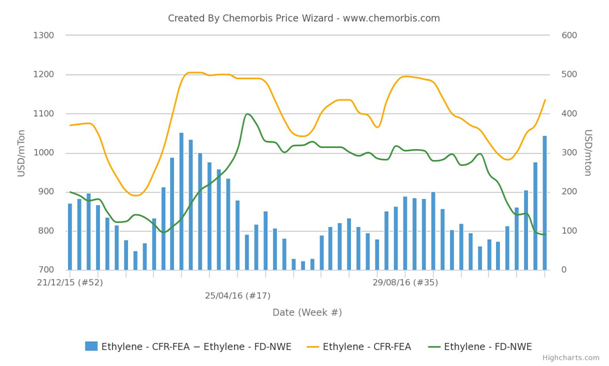