by ChemOrbis Editorial Team - content@chemorbis.com
According to the weekly average prices on ChemOrbis Price Index, European HDPE film market has been trading below China since early November despite the fact that European prices should usually carry a premium over the Chinese market under balanced market conditions.

Although European HDPE film traded slightly below or at par with the Chinese market for a couple of times in the past, this is the first time European prices are being traded well below China, defying the traditional pattern. The lost premium of Europe over China reached its peak at $72/ton in late February while it currently stands at $58/ton, the data reveal. 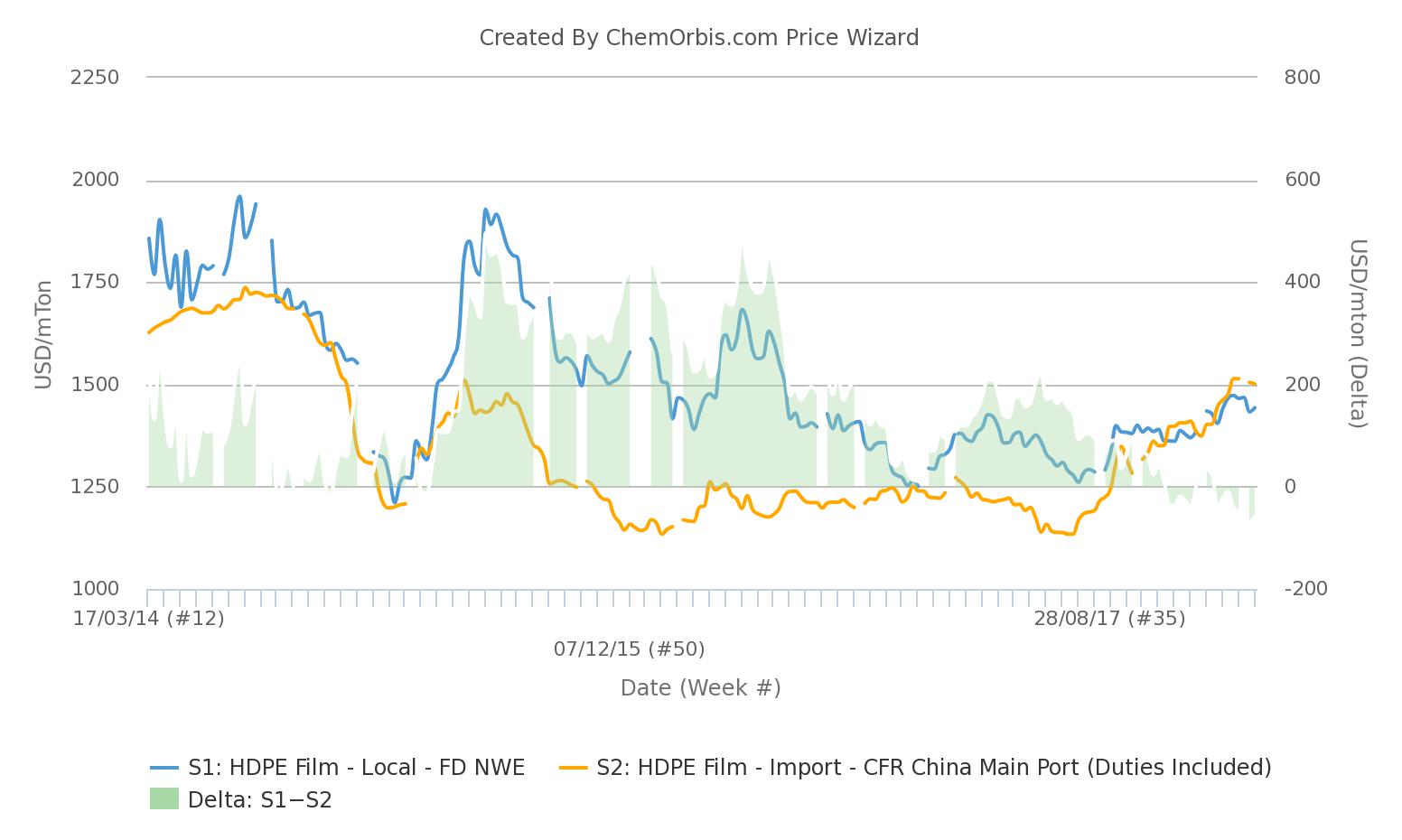 Similarly, local HDPE film prices in Italy have also been trading below China since the start of November. In late February, China’s premium over local prices in Italy reached $70/ton, the highest premium since April 2009, according to the data from ChemOrbis Price Index. In line with the most recent upturn in Italy’s HDPE film market, the gap between the two regions has narrowed to around $45/ton.

The main reason for the imbalance between the two was attributed to the supply-demand dynamics. Upon the news about China’s infrastructure renewal, demand for HDPE pipe increased drastically, prompting global producers to boost production in this field and divert their cargoes to the Chinese market.

In China, an agent of a major Saudi producer reported by late November, “For the past two months, our supplier had no HDPE film production as they switched to HDPE pipe.” In addition to tight supplies, the bullish run of crude oil futures also contributed to price hikes since then. Moreover, the ban on imports of scrap plastics also paved the way for higher demand for virgin material in China.

However, HDPE prices in Europe failed to catch up with the pace of hikes in other regions mainly due to the lack of demand and piling stocks as a result. Thin demand was attributed to buyers’ preference to run down their existing stocks that were secured towards the end of the year in large quantities.

Despite the fact that restricted import volumes made their way to Europe given poor netbacks it offers for HDPE compared to the rest of the world, overall HDPE supplies were beyond sufficient to meet what the market needs.

A Northwest European seller noted, “Our sales slowed down considerably due to the buyers’ pre-buying activities. HDPE prices are under stronger pressure from sufficient supplies in Europe.”

Players argue that European prices should go up or China’s import HDPE film prices that hover around nearly three-year high should see some downward corrections in order to move back into balance.

Meanwhile, it is not the case for LDPE and LLDPE as local prices in Europe carry the premium they should over China.