by ChemOrbis Editorial Team - content@chemorbis.com
In Europe, PVC sellers have entered November with hike attempts following a bank holiday on November 1 on the back of higher ethylene contracts, which were settled with an increase of €30/ton from October and relatively tight supplies. Sellers also take support from a firm global PVC market. The upward trend is an unusual departure from historical norms for this time of the year as can be seen on ChemOrbis Price Wizard. 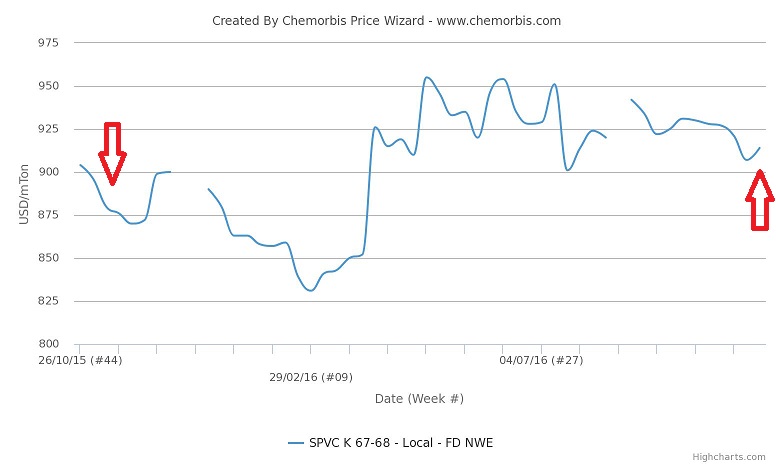 In line with the previously reported expectations noted at the end of October, a West European producer revealed their November prices with €20/ton increases to recover their margins while another producer has reported giving offers for Mexican material with €15/ton increases from October. A trader receiving higher offers for Mexican material commented that demand has been good during October and he expects another round of increases before the end of the year.

In Italy, a producer also announced an increase of €20/ton on its new offers following the new ethylene contracts. Sellers are now waiting to see the market’s reaction to the new price attempts.

In France, a plastic end manufacturer who concluded its October deals with rollovers to €5-10/ton increases commented that suppliers would start the month with increases of €10-15/ton which is half of the increase in the monomer settlement. “However, demand will be weaker in November, therefore sellers will struggle to obtain their hike attempts,” added the converter.

Before the new price announcements, a plastic end manufacturer in Germany reported that they closed their October purchases with rollovers from September. The converter had added, “Supply is not so ample in the market while demand is weak. Sellers may seek increases at the start of November; however we think that they may agree to rollovers for the remainder of the month.”

A distributor reported, “Our suppliers will ask for €10-15/ton increases as prices remained stable for the second month in a row while ethylene settled higher. However, we are not sure whether buyers will accept these hikes since the market won’t be able to support them, particularly due to the seasonal slowdown in demand,” he commented.