by ChemOrbis Editorial Team - content@chemorbis.com
PET prices for January emerged mainly stable or with slight decreases compared to the previous month in the European markets, with January MEG contracts fully settling with a €35/ton decrease. Although an initial January settlement for PX was heard to be agreed with a similar decrease, negotiations are still ongoing.

Traders and distributors operating in Switzerland and Belgium reported mainly stable or slightly lower offers from European suppliers. It was a similar scene in Germany’s and Italy’s PET markets, where players reported stable to weaker prices for domestic materials. 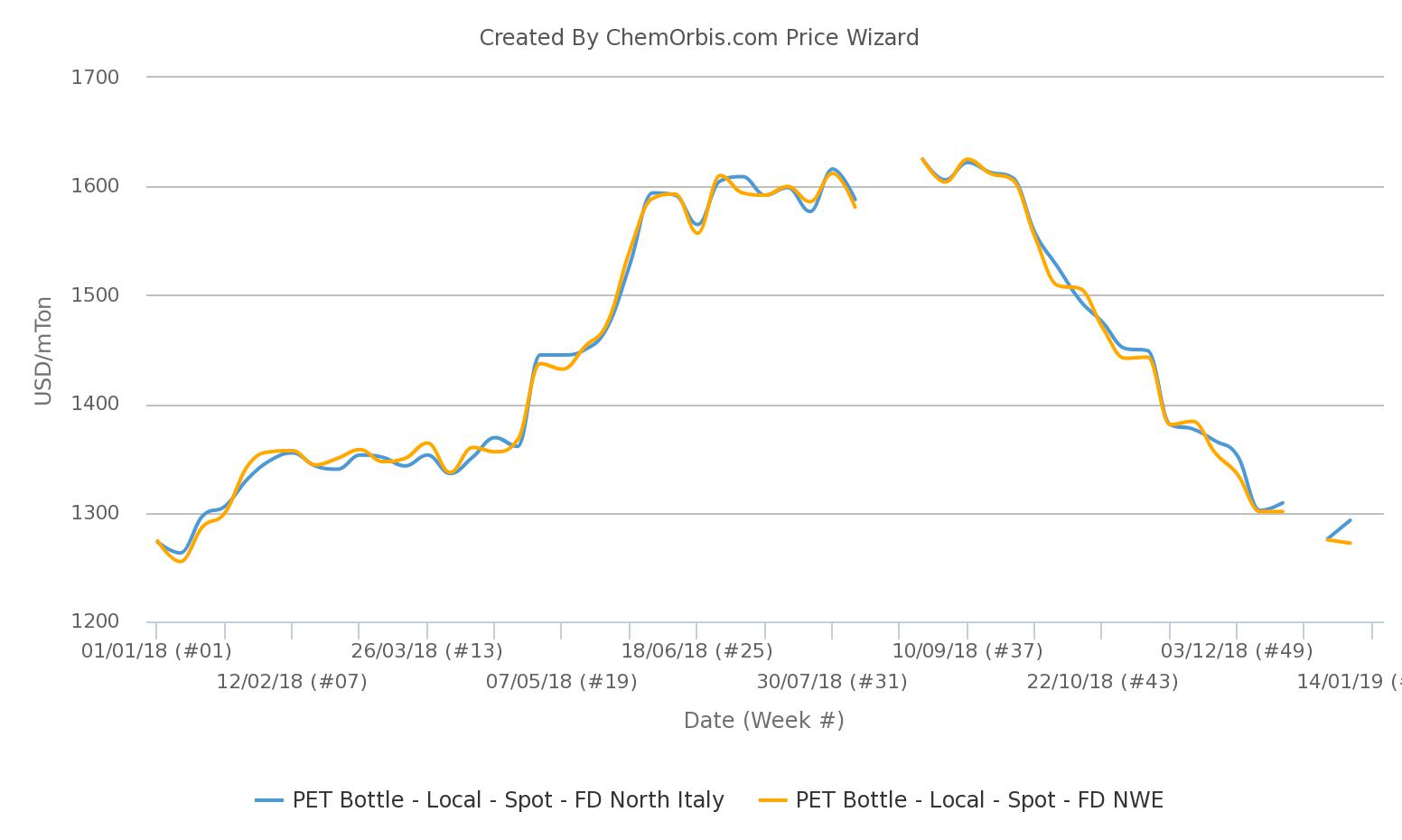 According to the weekly average data on ChemOrbis Price Wizard, January has marked the fourth consecutive month that PET prices steadily declined in the region. Accordingly, PET prices across Europe have cancelled the gains recorded throughout the first three quarters of last year.

Before the downward trend kicked off in the beginning of the fourth quarter of 2018, the weekly average of spot PET prices in Italy reached their highest levels in more than six years while prices in Northwest Europe hit all-time high levels, data revealed.

Meanwhile, players in Italy reported import PET prices at €1000-1030/ton DDP for Chinese origin. However, they concurred that the €1000/ton threshold has faded in line with higher feedstock and energy costs. Some are also pointing to the Chinese New Year, which this year falls on February 5.

“Supply from China will start to diminish starting from March due to the New Year holiday and this may create some availability issues in Europe,” a Swiss distributor argued. According to the distributor, spot prices will also remain above contract prices in 2019, as was the case in 2018.

A plastic end product manufacturer in Italy also noted that while supply is currently comfortable, demand for PET may start to increase by next month as pre-buying activities are expected to increase ahead of the Chinese festivities.

The flip side points to comfortable supply

However, others remain skeptical about the viability of a possible firming in prices given the balanced supply-demand fundamentals.

“We are covered until February as we had made some pre-buying during the past two months,” a converter said and added that they have reduced their production rates. Plus, they are pointing to the low season in place and volatile upstream markets.