Export PE offers from US notably up, but lose competitive edge in non-Asia markets

by Merve Sezgün - msezgun@chemorbis.com
by Esra Ersöz - eersoz@chemorbis.com
LLDPE and HDPE film offers out of the US have notably increased on the back of healthy demand from Asia as well as US producers’ easing sales pressure amid their reduced availability. Following the recent hikes, however, the US origin seems to have lost its competitive power in several non-Asia markets including Turkey, Italy, Egypt, South Africa and the United Arab Emirates.

Accordingly, players in the above-mentioned countries noted that buyers do not want to commit to these US cargoes at the new higher levels considering their long transit times.

China has been the first country to come out of its COVID-19 lockdown, lifting all restrictions in the first half of April. Demand from the world’s top PE buyer has been improving since then, attracting overseas suppliers to allocate more of their material to China.

According to the assessed average of ChemOrbis prices, the cumulative gain for US PE offers on CIF China basis has been only around $50/ton since early May.

However, US offers elsewhere have witnessed larger increases over this period, and currently standing above the levels in China. 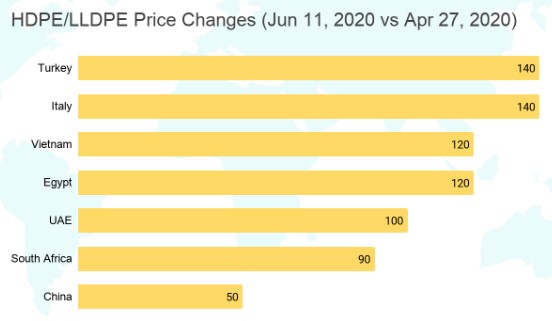 Import PE prices in Southeast Asia have been increasing since early May on a combination of a bullish China and firmer upstream costs. Adding to the improving sentiment has been demand expectations as the regional countries are gradually easing their lockdowns and downstream industries ramp up production.

After China, Southeast Asia is becoming the second most attractive destination for US suppliers. According to traders, buyers show interest in American LLDPE film offers at around 790/ton CIF Vietnam and $770/ton CIF Malaysia, cash.

US producers have recently applied larger hikes on their PE offers to non-China markets as they have been enjoying healthy demand from China for some time now.

According to the assessed averages of ChemOrbis prices, US PE offers in Turkey and Italy have witnessed cumulative increases of almost $150/ton since early May, larger than the gains in any other export outlets.

Following the latest round of hikes, American PE appears to have lost its competitiveness against other origins particularly in these two countries.

In Turkey, the premium that Middle Eastern PE offers carry over the US origins has shrunk to around $30-35/ton. Normally, the premium should be around $60-65/ton.

Meanwhile,in Italy, American PE is being offered on DDP basis almost at the same levels for local material.

In Egypt and South Africa, the latest offers for US PE have also emerged higher, narrowing the price gap with the Middle Eastern origins.

“Buyers are resisting the price increase and only those with urgent needs may agree to purchase at these levels,” a trader based in Egypt commented.