by ChemOrbis Editorial Team - content@chemorbis.com
Turkey’s polymer markets were on a bullish trend since the middle of August this year driven by supply constraints. Sentiment for PP and PE reversed recently as weak Turkish Lira and the year end lull severely disrupted trading activity. However, defying the weakening trend for polyolefins, PVC prices in the country retained their firmness due to a persistent shortage in prompt supplies.

In Turkey, both import and local PVC markets hit the highest levels in the last 18 months, according to ChemOrbis Price Wizard. Prompt availability remains short especially for k67 grade given an absence of European suppliers which caused this product to trade with a premium over k70 and k58.

Buyers project additional price gains over the near term as they admit, “We are struggling to find material. Some buyers called us to ask if we have extra inventories for them. The market will sustain its firmness in the coming days despite the rising dollar/TL parity and other financial issues which is unusual for the last months of the year.”

On the contrary, sentiment for PP and PE shifted now that activity lost significant steam heading to the year-end book closures. Moreover, slowing domestic markets in China, India and the US resulted in the emergence of competitive prices to Turkey from those markets. 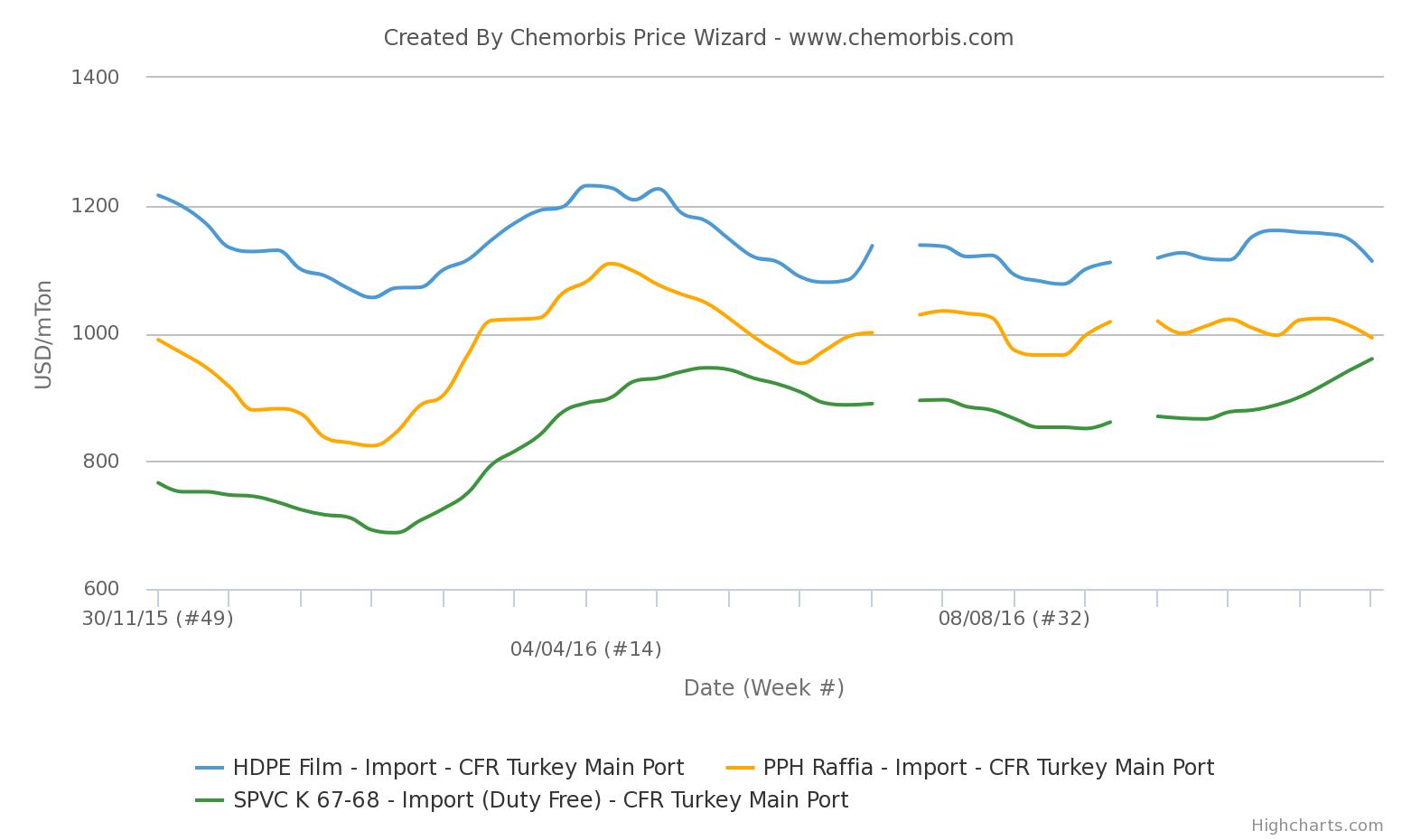 A source from a global PP, PE producer reported, “We are planning to resume our Saudi Arabian PP and HDPE offers in December following a maintenance shutdown. We are not optimistic about the future outlook since PP raffia and HDPE b/m demand is particularly weak nowadays.” A second producer from the Middle East followed a stable to slightly softer pricing policy on their list prices. “We heard that activity in India and Africa slowed down. We will follow a more flexible policy on our fresh LDPE and homo PP offers considering the year-end lull,” a producer source noted.

A sack maker reported, “We came across attractive prices for Russian and US homo PP cargos this week but we prefer to wait as the market will probably ease further next month.” A PP trader opined, “US materials showed up in India, Turkey and China as they traditionally do at the year-end. Prices may see downward adjustments next month given demand status.”

Pipe manufacturers expressed their expectations to hear more Indian and Russian HDPE 100 (natural) offers in Turkey soon. A packager commented, “The market softened compared to last week as supplies are set to increase for LLDPE and HDPE film grades amidst en-route cargos from Iran and Uzbekistan. A major Saudi Arabian producer will not have much allocation for another month, we were told. Though slowing European markets ahead of Christmas as well as calming Asian markets cause us to think that poor demand will overshadow any supply limitations.” Meanwhile, according to a trader, LDPE is still not as weak as other PE grades in terms of activity and prices.

Nevertheless, Turkish players do not foresee dramatic price falls considering the fact that China’s market continues to provide better netbacks than Turkey for sellers. A large PP, PE trader active in Turkey commented, “We expect the market to come down next month traditionally before rebounding by the second half of January. However, price cuts will not be large since Middle Eastern sources will remain unwilling to direct much material to Turkey citing unsatisfactory netbacks here.”