by Manolya Tufan - mtufan@chemorbis.com
In Europe, firm expectations for March PE prices have been buttressed by the recent ethylene contract despite unsupportive fundamentals. Players are now waiting to receive fresh March offers higher.

March ethylene contract in Europe was agreed up by €30/ton from the February settlement owing to rising spot ethylene prices and energy complex.

October 2018 was the last time ethylene contracts were settled with increases. This has reinforced the already improved sentiment in the PE market as players were bracing themselves for March increases for some time now.

Several PE producers already closed their order books earlier than usual in February, which was interpreted as sellers’ aim to recover their margins amidst ongoing drops. A few sellers already applied increases that range between €40/ton and €50/ton for February cargoes.

Some producers reported that they will have fewer volumes to offer in March. A South European producer is expected to procure only 60% of its customers’ needs.

LDPE hit over 9-year-low in Italy; LLDPE near 7-year-low

According to the weekly average prices on ChemOrbis Price Index, spot LDPE prices in Italy moved back to the levels last seen in late December 2009 while LLDPE prices stand at their lowest levels not seen since early July 2012. Data show that LLDPE and LDPE prices in Italy decreased by 14-16% since the beginning of 2018. 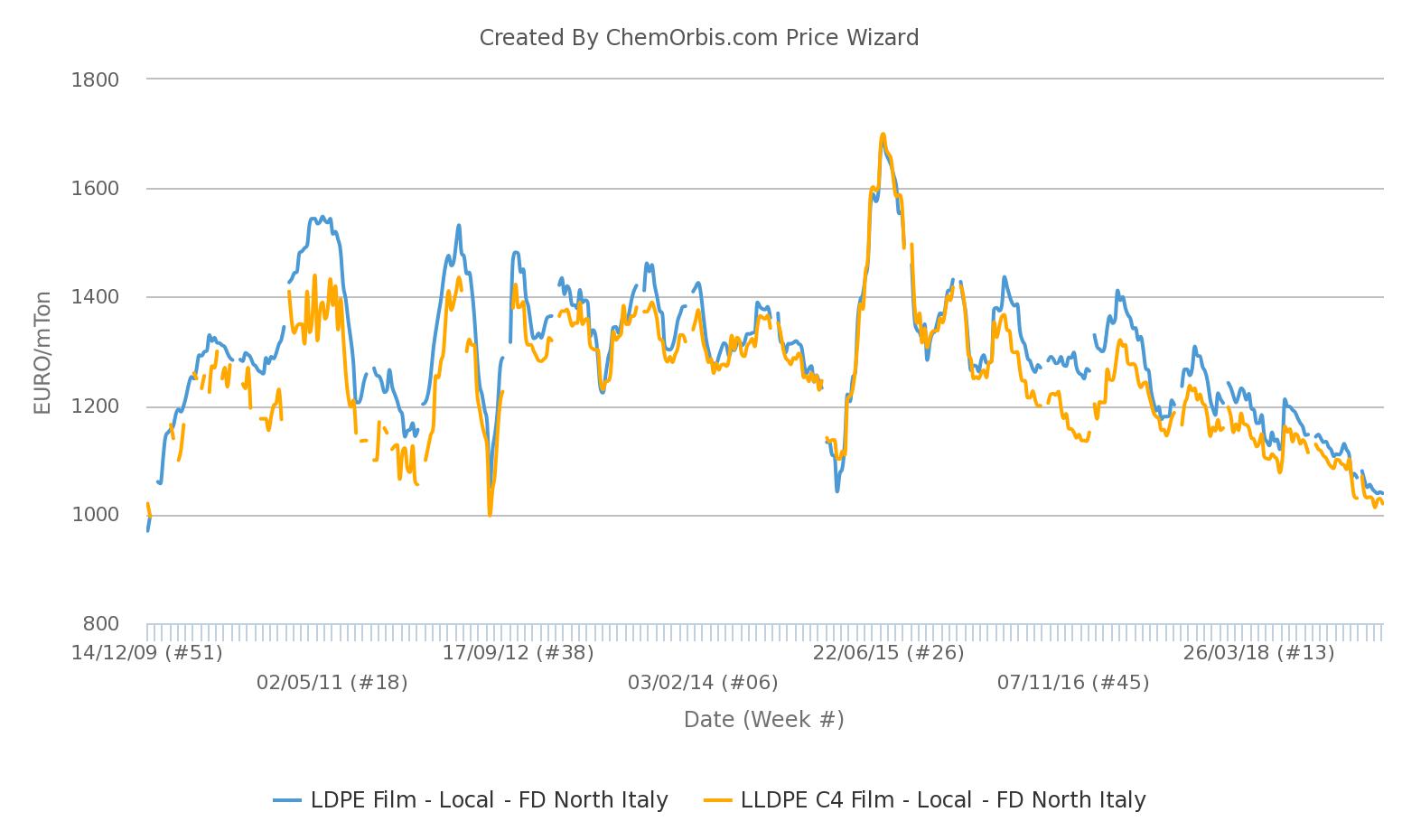 PE hikes larger than ethylene around the corner

Considering the fact that prices hover at around multi year low levels, sellers voiced their intentions to seek larger increases than that of ethylene even before the monomer contracts settled.

A distributor of a West European producer said prior to the ethylene settlement, “We think that producers will approach the market with increases larger than ethylene as PE prices have reached very low levels. Thus, we expect to see increases of up to €50/ton for PE prices.”

Will demand pick up?

There have been no major supply concerns in the market despite some production outages across the region while buyers were not in a rush to buy amid uncertainties over economic outlook.

However, players believe that if overall demand improves, this may tip the balance in favor of sellers.

A reseller from Italy voiced slightly firmer expectations for March as demand may improve for some PE applications in the agricultural and packaging sectors.

A distributor in Germany, meanwhile, attributed his expectations for an improvement in demand to the fact that buyers, who purchased limited volumes in February, will have to replenish their stocks.

“Our demand starts to improve as end users are doing some pre-buying ahead of the awaited March hikes,” a converter confirmed.

Converters in the UK do pre-buying amid concerns over Brexit

Higher demand from the UK ahead of Brexit was an exception. A buyer said, “Many producers will face difficulties in transporting their material from the UK to the EU or the other way around. This situation causes uncertainty and pre-buying activities are accelerated as a result.”

Import flows will be an important factor to watch

According to players, incoming materials from the US and the Middle East will play a crucial role in setting the tone of the market. They argue that if more PE cargoes make their way to Europe, this may keep the size of expected increases in check.