NYMEX crude oil futures plummeted nearly by $35/barrel on average since October 2014 to date although they rebounded back above $45/barrel by end September. For ICE Brent crude, prices also lost $35/barrel in the last one year. Both values came down from levels above $80/barrel recorded in October 2014.

Nowadays, freight rates between China-Turkey and SEA-Turkey are standing at historic lows, slightly below $10/ton for the period between October 14-31, 2015, according to ChemOrbis Plastic News. However, as of the beginning of November, ship owners expect increases in freight rates for shipments from the Far East. 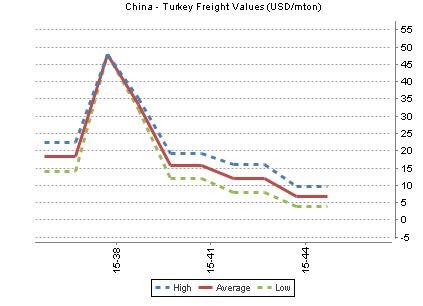 According to Reuters, China’s economic growth is expected to slow to 6.5% in 2016 from an expected 6.8% in 2015, even as the central bank eases monetary policy further to ward off a sharper slowdown. The world’s second-largest economy had registered a 7.3% growth rate in 2014 which was deemed as the slowest pace in 25 years. China’s growth is seen falling to 6.8%, the lowest level since 2009. In line with China’s contracting economy, the country’s reduced imports found an inevitable reflection on Asia’s shipping business.

Asia continues to be a crucial polymer supplier for Turkey. ChemOrbis Import Statistics reveal that South Korea has been the top ABS and PP copolymer exporter to Turkey so far in 2015. The country, which has a Free Trade Agreement with Turkey since July 1, 2011, ranked as the third largest exporter for HDPE, LLDPE and PS, while it is the fifth source for homo PP for Turkey.

“There are very notable changes in supply-demand balances during and after the 2008 global crisis. Ship owners reactivated their large capacity ships by 2010 after halting them in 2007. However, there have been significant contractions in worldwide economies in several regions including the Mediterranean, Middle East, Europe and the US. Moreover, political crisis in Egypt, Algeria, Libya, Iraq and Syria ruined the whole economic/trade balances. Ukraine-Russia crisis was another tension factor,” Alev Kocabaş, MTS Logistics - Izmir - Sales & Marketing Manager clarified.

Many Far East Asia based shipping companies exited the market in recent years. Others in financial crisis formed consortiums and sold out their small scaled ships in order to serve with larger capacity vehicles. “Although they aimed to earn more via shipping with lower costs, trade contracted given the various economic crisis unfortunately, affecting the large capacity ships,” Kocabaş added. 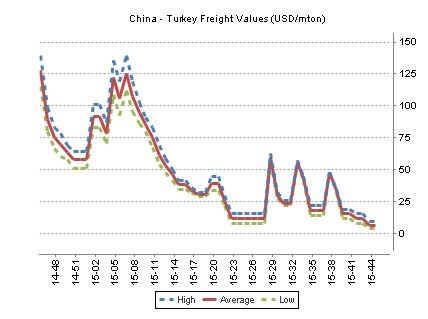