by ChemOrbis Editorial Team - content@chemorbis.com
The HDPE markets of China and Turkey turned up in the second half of July in line with other PE products. Beforehand, this product suffered from a larger loss when compared to LDPE and LLDPE due to ample supplies and thin demand. Now, HDPE prices have been paring their earlier losses with players in both markets reporting improved demand and waning supply levels.

China’s PE market constantly faced high inventories for HDPE in the long downturn that lasted from February to July. Ample local supplies, building inventories of import cargoes at bonded-warehouses as well as the influx of Iranian cargoes at competitive prices weighed down on the HDPE market during this period. However, supplies have gradually shrunk in the past one month and helped HDPE prices gain ground steadily, offsetting some of their previous losses recently.

“Overall supply levels for PE are not high at the moment while HDPE blow moulding supplies are slightly limited, which pushed prices higher. Demand is improving in line with the approaching high season. Plus, futures prices are firming while spot ethylene remains on a bullish note in Asia,” traders in China remarked.

A Shanghai based trader also confirmed that HDPE blow molding is somewhat tight in the spot market, adding that supply of other PE grades was sufficient. Low inventories at domestic producers and limited supplies from Middle Eastern and Iranian suppliers will continue to support the market over the near term and push it up further along with surging ethylene costs in Asia.” A manufacturer commented, “The ban of import scrap will counterbalance the impact of new capacities coming on stream. PE prices are likely to remain strong amidst high season on the corner.” 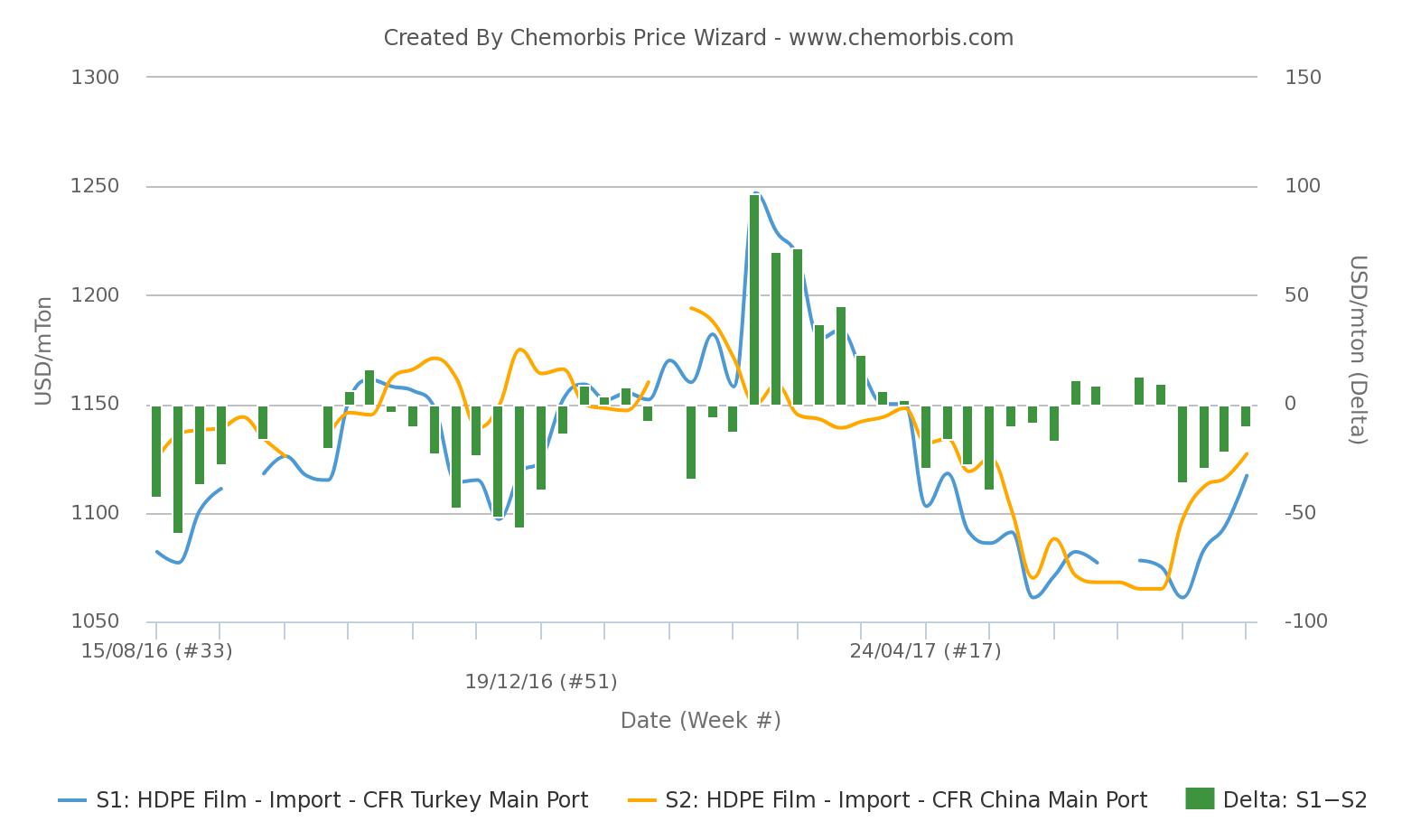 A similar supply-demand view is valid in Turkey, too, where activity was dampened by a bearish PE trend that lasted for 4 months before the recent firming trend. Meanwhile, ample supplies particularly from Iran caused most HDPE products to respond to the upturn much later. However, demand for HDPE film and blow moulding has improved recently for the first time after a long while in line with diminishing stocks.

“Limited August allocations from our Uzbek supplier combined with the hikes from all suppliers including from Iran and the Middle-East helped demand recover eventually,” a trader highlighted. A manufacturer confirmed, “Traders told us that they already sold out their Uzbek cargos amidst better demand from large buyers this month. Iranian sources applied hikes of up to $40/ton just in a week while an Egyptian source does not have any prompt HDPE materials at bonded-warehouse for now.”

“We realize that prompt supplies have diminished for HDPE film and b/m as buyers returned to the market in line with the bullish trend after staying sidelined for a long time,” commented a seller. Another one agreed, saying “We received an increasing number of inquiries for Iranian b/m this week. HDPE film is also seeing better buying interest nowadays.”

In the meantime, Turkey’s import HDPE film market has been trading at a discount compared to China since mid-July, according to ChemOrbis Price Index, although the discount has narrowed to around $10/ton recently owing to the faster hikes in Turkey this week.