by ChemOrbis Editorial Team - content@chemorbis.com
China’s import LDPE market has been on a rally since early August on the back of an ongoing tightness that started ahead of the G-20 Summit. Major domestic producers’ low inventory levels as well as reduced supplies from overseas markets also contribute to the current supply concerns in the country. According to data from ChemOrbis Price Index, import LDPE prices on a weekly average basis have surged by $197/ton since the start of August.

On the upstream side, however, spot ethylene prices in Asia have been tracking a softening path since early September. CFR China based ethylene prices have broken below the $1000/ton threshold recently, standing at their lowest levels since last March.

As a result of the divergent paths tracked by LDPE film and ethylene, the gap between them has reached $327/ton recently, the largest since October 2015, as ChemOrbis Price Index shows. 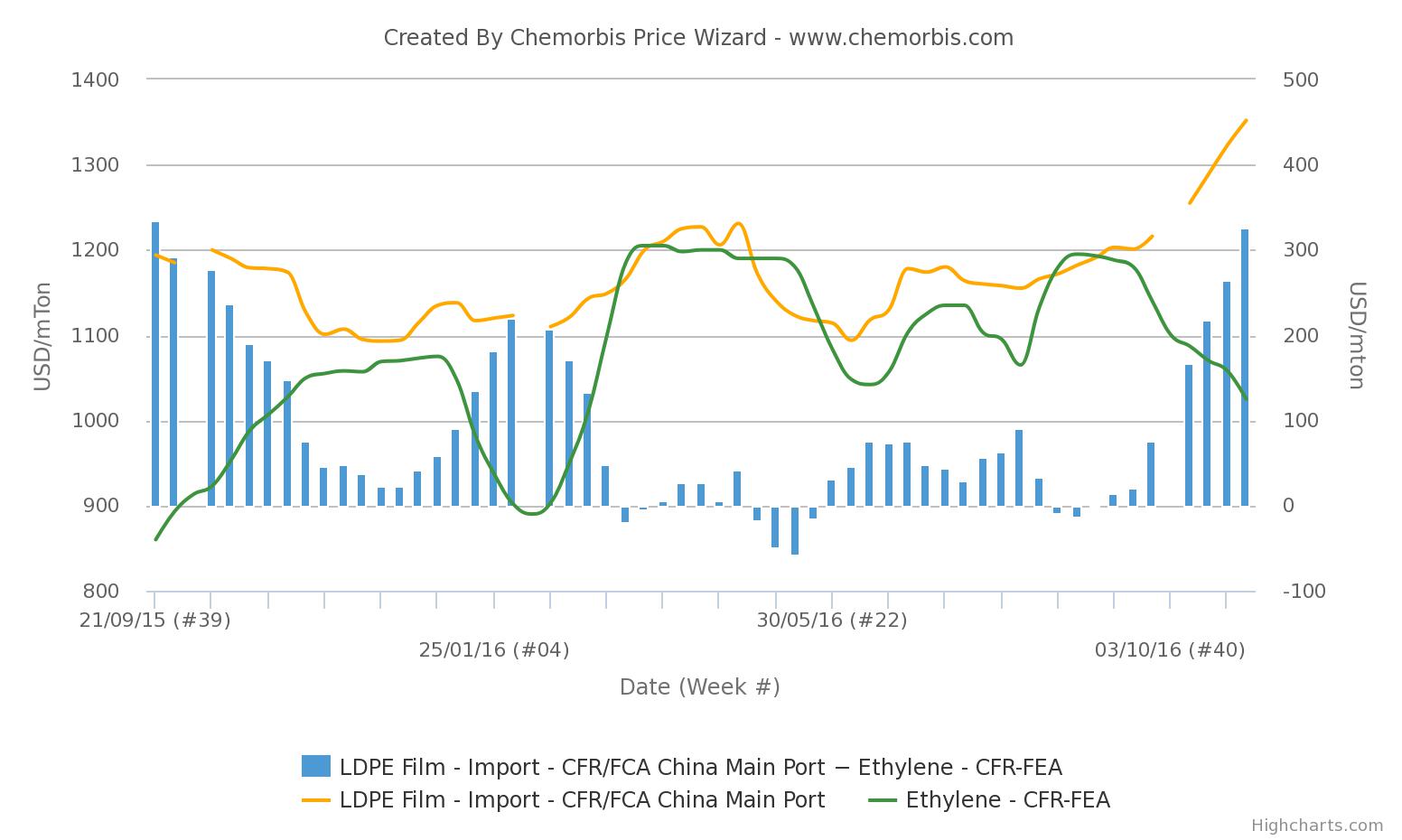 A Chinese distributor attributed the firming trend specifically to reduced supplies from Iran. “Supply from Iran will remain limited in the coming months as many deals were concluded between Iranian and European players during the K fair in October,” he stated. Looking at statistics, LDPE imports from Iran plunged by 46.2% on a yearly basis in September to reach 28,193 tons.

Meanwhile, a few PE players reported that re-export LDPE film cargoes from Vietnam emerged in the Chinese market over the past couple of weeks.

A China-based trader reported that they received an offer for re-exported Middle Eastern LDPE film from Vietnam, commenting, “LDPE supplies remain tight while demand is relatively good in China.

Hence, Vietnamese traders are trying to divert their imported cargoes to the country nowadays.”
A second trader noted, “The upward movement remains in place in China’s LDPE market amidst low supply levels and healthy demand. This is encouraging several Vietnamese traders to re-export their Middle Eastern LDPE film cargoes to China at competitive levels.”

A trader operating in Vietnam also stated, “Normally, we see re-exported PE from China in Vietnam. However, the opposite scenario is the case this time since LDPE film offers below the $1300/ton CFR, cash level have disappeared in China.”

At the same time, crude oil futures on the NYMEX broke below the $45/barrel threshold again on November 3. This is expected to maintain further downwards pressure on global naphtha and ethylene markets. Players are now discussing the near term outlook amidst these contradicting factors that would affect global PE markets.