Import prices declined by around 10% since May in China

As can be seen from the graph below, China’s import markets steadily lost ground from March to December last year. The import LDPE, LLDPE, HDPE and HDPE b/m markets were stable to slightly firm from late 2018 to around May this year, without being able to compensate the losses recorded in the second half of last year.

Since early May, import PE prices have been down by approximately 10%, the weekly average of ChemOrbis Price Index suggested. However, the cumulative loss is much larger at 25-30% compared to March 2018, when the downturn first kicked off.

This week, import HDPE film and blow moulding prices from Saudi Arabian sources posted $30-40/ton drops week over week to sink below the $1000/ton threshold for the first time since July 2010. 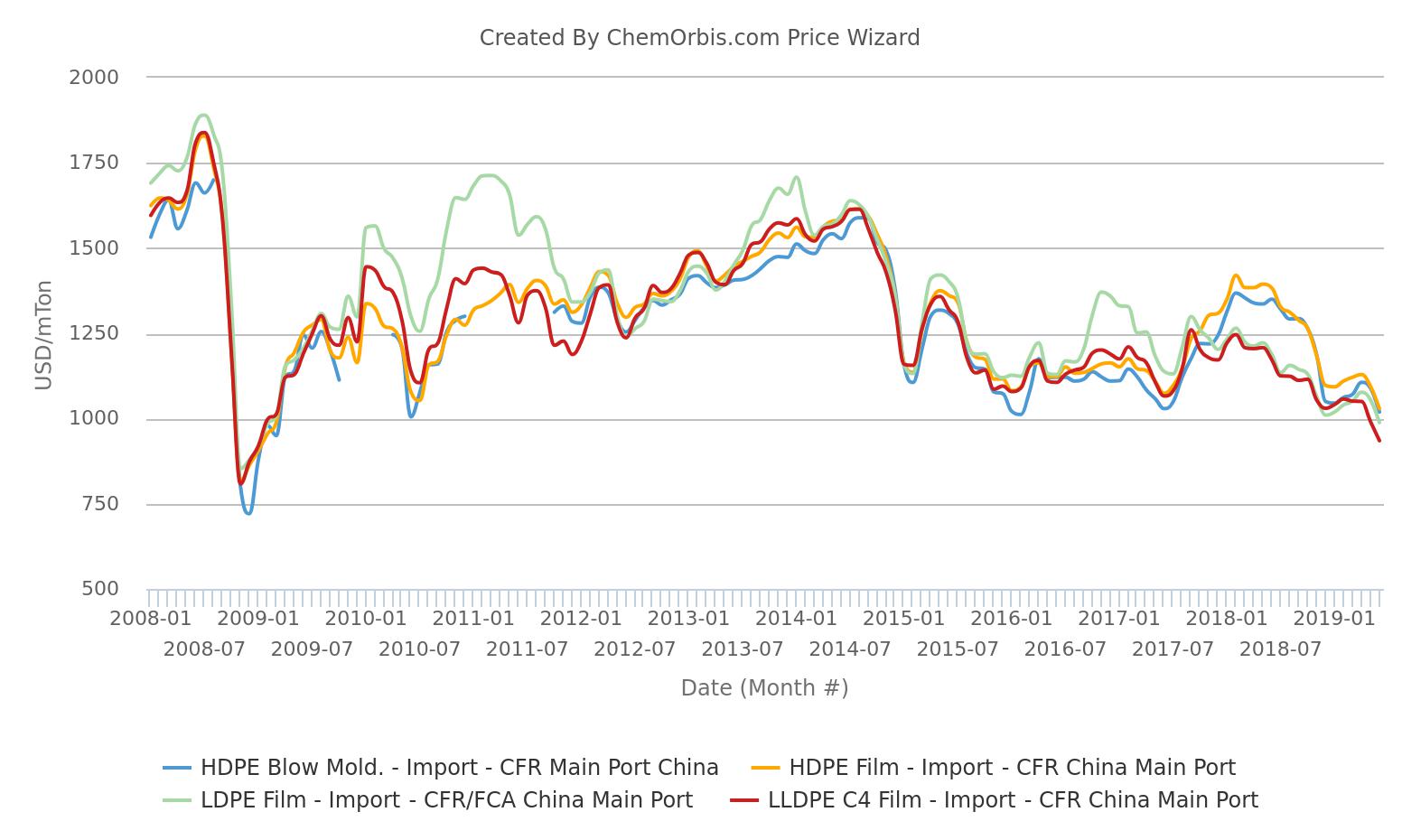 Following China lower, data from ChemOrbis Price Index revealed that the weekly average of import LLDPE film prices hit its lowest level since March 2009 in Southeast Asia. LLDPE has seen larger drops than other PE products across the region.

Indian PE prices showed up at competitive levels both in China and Southeast Asia this week. LLDPE prices for Indian cargos saw as low as $890/ton CFR in China and Vietnam, forming the low end of the import markets.

“Manufacturers are still cautious about securing fresh cargos since the Chinese Yuan continued to depreciate against the USD and end product orders were down on mounting trade concerns. Meanwhile, Indian LLDPE film and HDPE injection offers are particularly aggressive,” highlighted a trader.

In upstream, meanwhile, WTI crude futures on NYMEX stood at a 5-month low at around $53/bbl by late this week, according to the weekly average data from ChemOrbis Price Wizard.

When PE prices saw these levels back in 2009, crude futures were hovering around the $35-40/bbl spread right after the plunge in 2008 crisis, which was first fueled by the subprime mortgage market in the United States, and developed into an international banking crisis and then followed by a global economic recession.

The recent PE declines have mostly stemmed from lengthening supplies and stagnating demand following the trade war that kicked off last year between the US and China.

Considering the uncertainties driven by the prolonged trade dispute with the US, the upcoming capacity additions across the globe and slower economy, some players remain cautious for the medium term. Others feel PE prices may take a respite from the recent lows.