by Merve Sezgün - msezgun@chemorbis.com
Import PE prices in China have extended their gains into the fifth straight week on the back of ongoing tightness combined with some restocking activity ahead of the National Day holidays in early October. Although the local market has felt the pressure from lower Dalian futures recently, overseas sellers have continued to enjoy healthy demand and better netbacks in the country.

“Most overseas sellers have already wrapped up their September PE business in China, hence they are now feeling free from any sales pressure. Despite bearish signs from the domestic market, import prices have managed to increase for another week amid supply disruptions caused by Hurricane Laura in the US,” noted a few players.

Other factors that are supporting the uptrend have been rising spot ethylene prices and an appreciating Chinese yuan which has helped make imported cargoes more attractive.

According to data from ChemOrbis Price Index, the weekly average of LDPE film prices on CIF China basis has reached its highest level since August 2018. On a weekly comparison, spot LDPE film prices increased $60/ton, with offers for Middle Eastern origins standing at $1160-1180/ton CIF, cash.

Data also reveal the widening price gap between LDPE and HDPE film. As can be seen in the graph below, LDPE film prices are currently carrying a premium of around $205/ton over HDPE film in China. This is the largest gap since November 2016.

HDPE film offers for Middle Eastern origins are currently reported at $950-970/ton CIF, cash. The range is slightly up by $10/ton from last week. 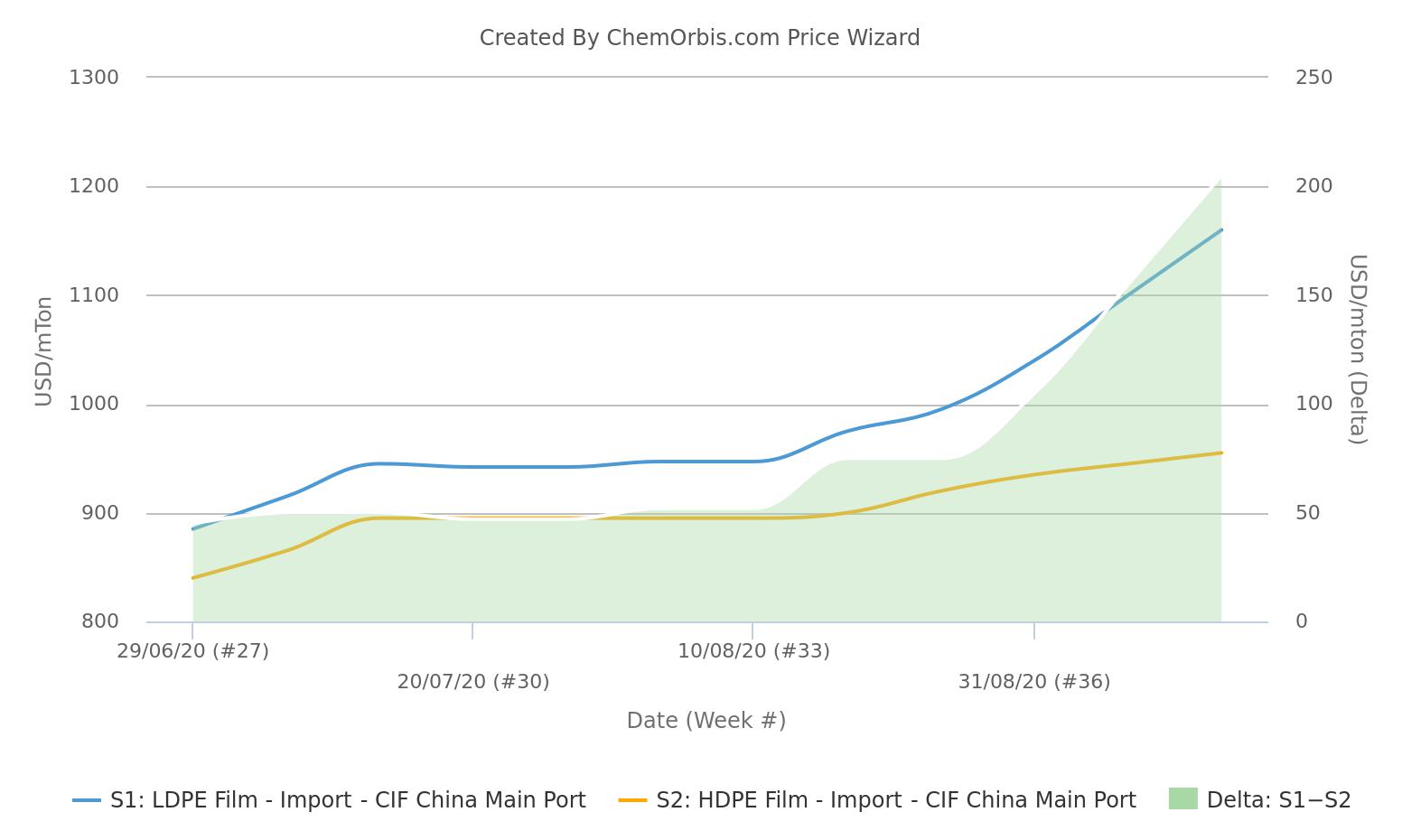 While the uptrend has remained intact for import prices, the local PE market has been showing some bearish signals in the midst of weaker Dalian futures and upcoming new capacities.

“The two major Chinese producers’ overall polyolefin inventories have neared 800,000 tons this week. The turnaround season has ended and the market is set to welcome new capacities. Expectations of rising supply levels are weighing on the demand outlook,” a local trader opined.

Meanwhile, LLDPE futures on the Dalian Commodity Exchange were CNY110/ton ($16/ton) lower from a week earlier on September 16. Futures have been dragged down by weak oil prices.

A seller said, “Buyers are cautious regarding fresh purchases due to the recent losses in LLDPE futures. Some producers have cut their PE offers to the local market slightly this week. Prices could see further corrections in the days ahead.”