by Shibu Itty Kuttickal - sikuttickal@chemorbis.com
Disregarding short-lived expectations of a bottoming-out back in early August, import PVC prices have been falling since March in India. Players again argue that prices will bottom out in the near term, this time with support from the lean monsoon season having ended, heralding the start of a festive season that brings in higher requirements ahead.

Traders point to Indian importers shunning Chinese PVC as a result of the ongoing investigation for the purpose of imposing safeguard duties, as a reason for a tightness developing in the market. Further, although US export prices for October shipments have fallen by $20/ton to $750-760/ton FAS Houston, import prices of US origins have not fallen below the high-$800s/ton CIF India, they added.

In India, import PVC K67 prices of overall origins were assessed stable to $30/ton lower at $840-920/ton CIF, cash basis in the week ended October 1. For the second week in a row, US offers were at the low end of the assessment range, with traders offering a major US producer’s shipments. 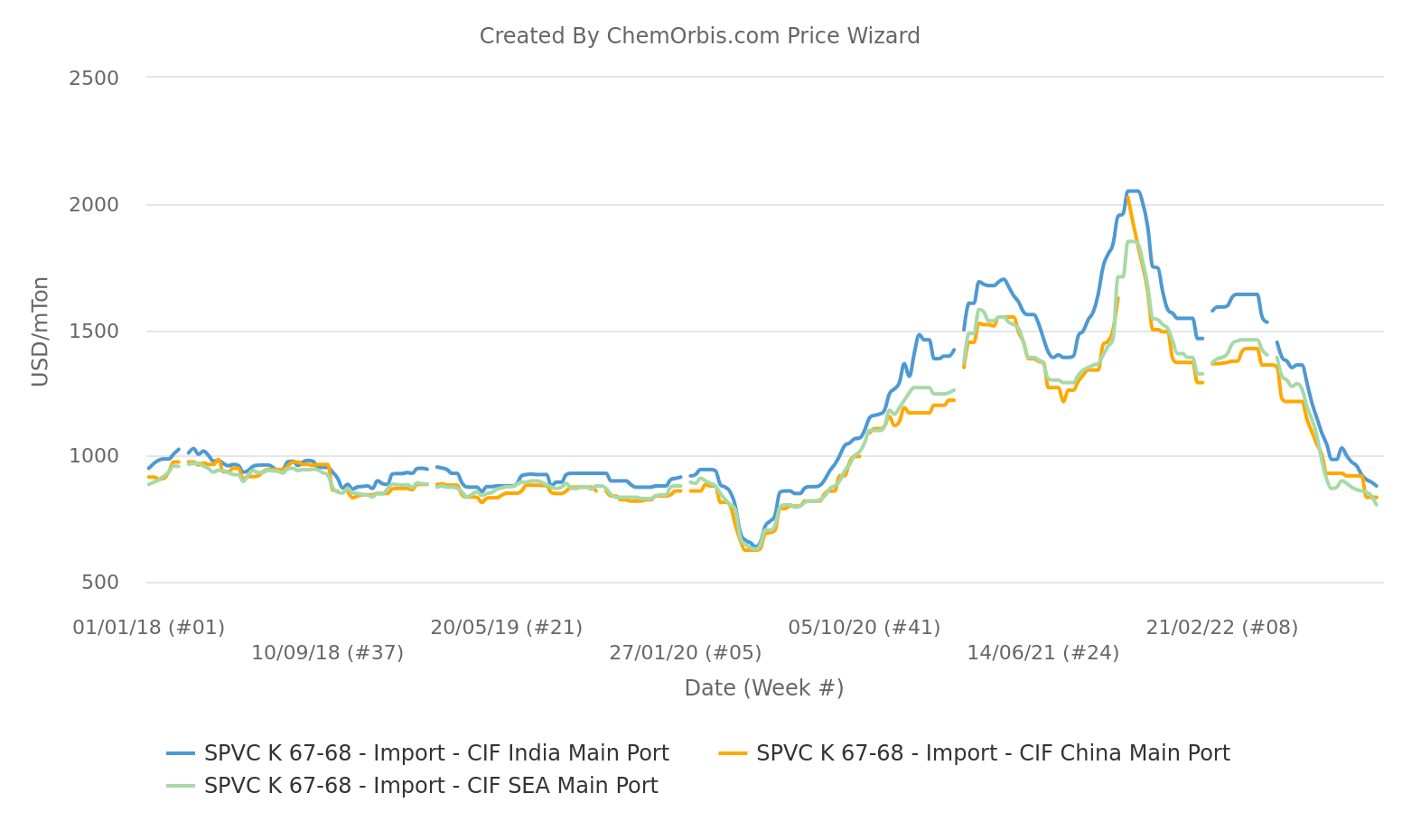 ChemOrbis PriceWizard shows PVC import prices into India have fallen by about 15% since early August till the week ended 1 October. In comparison, Chinese and Southeast Asian import prices fell by about 10-11% over the same period. The cumulative decrease since March has also reached 46% in India while Southeast Asia has had a 40% fall.

“Import prices into India have fallen by a larger margin than to other Asian regions. This has happened because of the impact of the monsoon season, which typically sees lower requirements of PVC. Players also expect prices to keep falling and refrained from buying more stocks than for immediate requirements. This has resulted in requirements for consumer demand expected in the festive season that has already started and ahead of the year-end,” said a Mumbai-based trader.

Seasonal demand is round the corner

According to players, the end of the monsoon season has resulted in more inquiries to buy. “Buying interest has certainly been good although buyers have held out for lower prices. But as seasonal demand increases, we are set to see prices also rising,” another Indian trader said.

“Prices are down currently as buyers are seeking prices in the low-$800/ton. But we are seeing a higher number of enquiries coming in currently, which is a positive sign that points to higher requirements ahead,” he added.

China has been a major exporter to India this year, with acetylene-based PVC from China being highly sought after by Indians because of lower prices. But the latest Indian move to investigate the need to impose safeguard duties against PVC with a residual VCM content of 2% or more has put a question mark on Chinese imports.

“We could expect safeguard duties to be announced any time. And till such time the actual results of the investigation are made public, we are unlikely to see interest in buying Chinese PVC,” an Indian trader said.

“And, as Chinese PVC is out of the equation, there’s bound to be a lack of enough import PVC available to India,” he added. India is the biggest importer of PVC in the world.

The previous week saw US offers putting pressure on the low end of the PVC import pricing range in India as well as in Southeast Asia.

“Some players could just be hoping against hope for still lower prices ahead. We are hearing of offers of US-origin shipments at $840/ton CIF India. We feel this could be the result of some players selling short, hoping for prices to fall in the weeks ahead. That’s only a remote possibility,” the Mumbai-based trader said.

At the same time, players also point out that US export prices for October have only fallen by about $20/ton to about $750-760/ton FAS Houston. “This means that prices below $870/ton CIF India are just not possible for US origins,” said an Indian trader.

Taiwanese major may roll over or raise prices slightly

Indian players expected a major Taiwanese producer to either roll over or increase prices slightly for November, compared to its October prices.

”The end of the monsoon season and the start of the festive season, together with the drying up of Chinese offers into India would likely lead to prices bottoming out shortly,” the Mumbai-based trader said. “We expect the Taiwanese major to roll over, if not slightly raise, import offers but the producer is unlikely to notify its November prices this week ” he added.