Indonesia to implement ADD on PET imports from 3 Asian countries

by ChemOrbis Editorial Team - content@chemorbis.com
Komite Anti-dumping of Indonesia (KADI) notified that they have recently concluded an anti-dumping (ADD) investigation on imports of Polyethylene Terepthalate (PET) from China, South Korea and Malaysia based on a petition filed by Association of Synthetic Fibres Producers of Indonesia (APSYFI). The investigation was initially announced on 22 August 2016.

KADI said in a statement, “To initiate ADD proceeding, KADI only analyze the existence of dumping, injury, and causal link between dumping and injury. Investigation is conducted to remedy the effect of unfair trade against domestic industry. Impact of imposition of ADD against national economy will be discussed by the national interest team at the ministerial level.”

No official statement has been made by the related governmental bodies so far regarding the starting date of the implementation of ADD.

Based on KADI’s investigation, the size of anti-dumping duties for PET bottle grade originating in and/or exported from the countries and companies are listed in the table below: 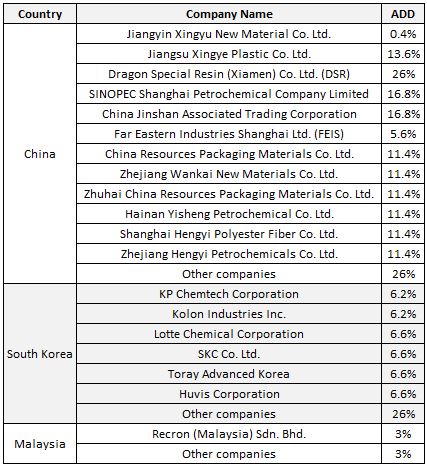