by ChemOrbis Editorial Team - content@chemorbis.com
Turkey’s PE markets have been on a rising trend since November last year with HDPE grades achieving the most visible increases owing to the supply crunch. LLDPE prices have also risen albeit cautiously in the same time frame whereas LDPE has failed to track the bullish run due to a number of reasons.

“Middle-Eastern PE suppliers could not obtain even rollovers for LDPE in some cases while January deals for HDPE and LLDPE were higher on the month. This is mainly due to the lack of supply concerns and generally muted activity for LDPE,” players affirmed. Converters also stated that they are able to secure prompt materials from the domestic market smoothly if they need material. 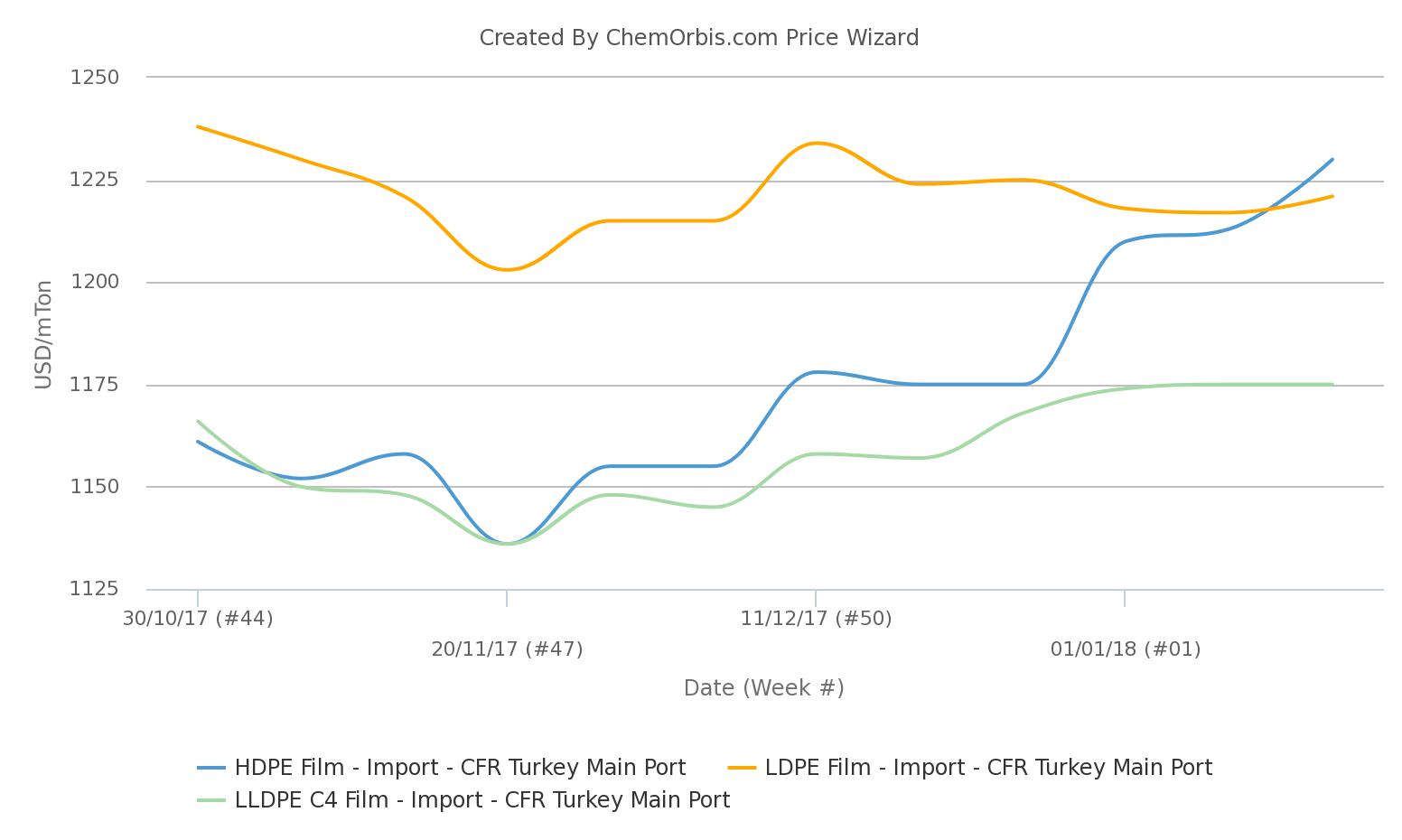 As can be seen from the graph above from ChemOrbis Price Wizard, the import LDPE film market edged up only by around $15-20/ton on a weekly average basis throughout November-January. The LDPE market has even weakened since the second half of December, cancelling some part of its earlier gains. The LLDPE film market was, meanwhile, up by $40/ton in the same timeframe, while the cumulative increase registered by HDPE film almost reached $100/ton.

Moreover, the import HDPE film market has moved above LDPE recently after HDPE’s constant gains pulled it up to match the LDPE market in the week before, as was previously mentioned in ChemOrbis Plastics News Import LDPE and HDPE trade almost at par in Turkey .

“A Saudi Arabian major was sold out for January and plan to issue LLDPE and HDPE hikes for February. We already received an additional $30/ton increase for a small HDPE volume this week. Yet, LDPE prices in Turkey are not likely to change much as buyers are not rushing to buy in the midst of the low season and comfortable supply,” a packaging converter reported.

A trader stated, “Although end product markets are generally not brisk, activity for HDPE grades has been boosted by tightness as buyers are making safety stocks nowadays. Expectations hint at further hike requests from PE sellers, especially for HDPE grades.” This is also because Iranian and Uzbek sellers focused more on their exports to China amidst increased demand following the ban on imports of plastic scraps.

The same picture is valid in the local PE market, where LDPE hikes were curbed by low buying appetite. According to ChemOrbis Price Index, the local LDPE film market gained $20/ton from November to date. However, LLDPE offers were up by $60/ton while HDPE film soared by slightly more than $100/ton on a weekly average during the last three months.