LDPE markets in Turkey and China come back at par

by ChemOrbis Editorial Team - content@chemorbis.com
As China’s LDPE market returned from the holiday on a softer note and the import LDPE market in Turkey has maintained its rising trend, the two markets appear to be back at par recently after a long period that Turkey traded well below China.

Although Turkey should traditionally stand above China due to freight differences and its relatively smaller market size, Turkey’s import LDPE market traded below China since the first half of August, marking a gap between the two countries at $180/ton by mid-December, the widest delta since March 2013, according to data on ChemOrbis Price Wizard. For the most part of 2016, Turkey’s LDPE market either traded at par with or below China, as can be seen from the graph below. 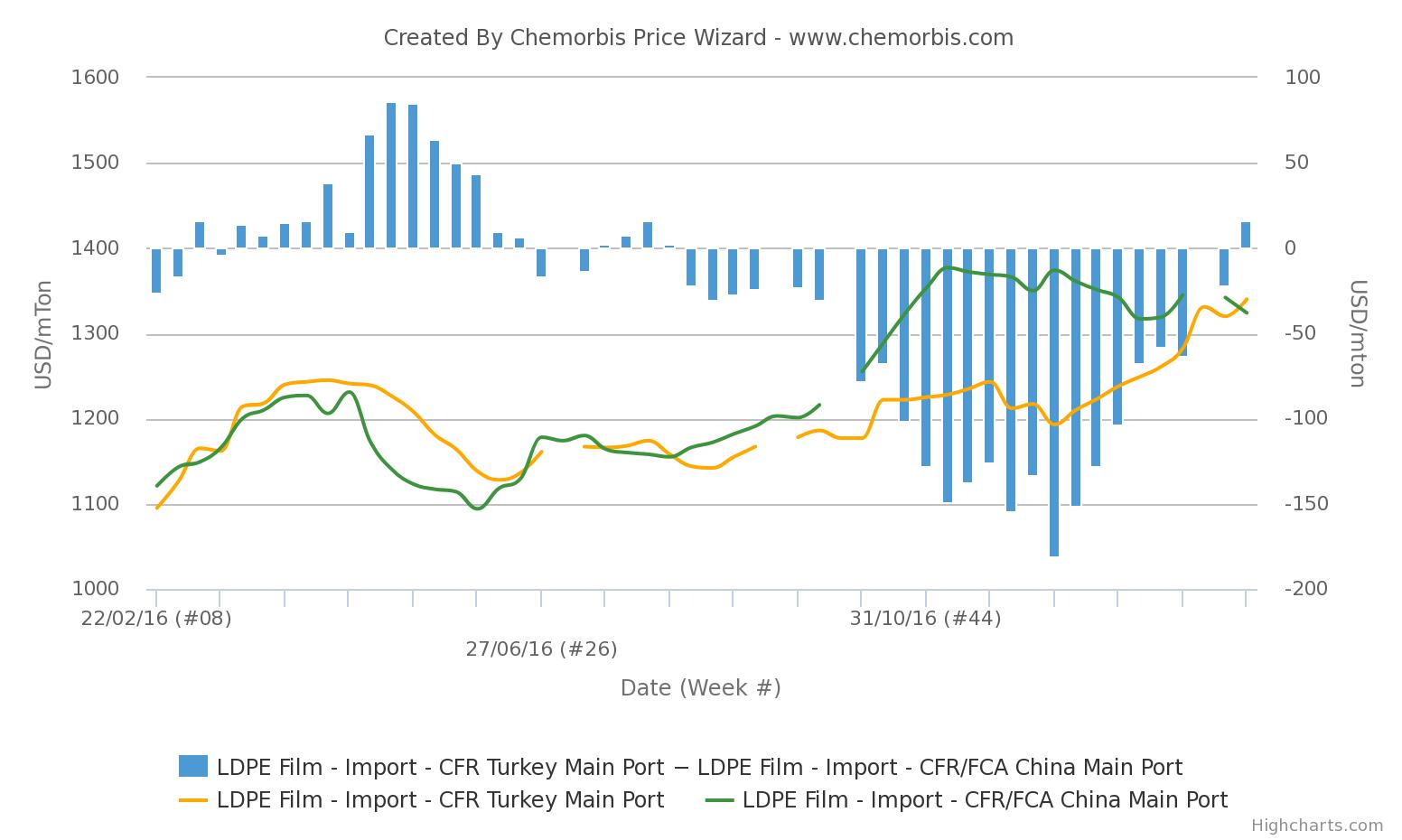 In Turkey, LDPE prices moved upwards on the back of limited import availability from the Middle East. Buyers showed resistance to the higher prices; however, Petkim’s hike announcements for the third time in a row this month on their list LDPE prices strengthened sellers’ hand this week.

A Middle Eastern supplier reported, “We sold out our very limited February quotas in Turkey. We had to refuse many inquiries for LDPE, while we achieved smooth sales for all PE products in general.” A manufacturer reminded that Middle Eastern have kept their allocations limited to Turkey since summer, arguing that it is due to the prevailing uncertainties in economy and politics.

Meanwhile, in China, LDPE film prices witnessed reductions due to a lack of demand and high inventories recently. A producer attributed slow LDPE demand in that country to the excessive increases prior to the holidays, noting, “It’s still early to have a clear picture of the market as players are not fully back to the market and buyers are expected to focus on digesting their inventories first. The LDPE market had peaked before the holidays and it is now stepping back.”

The recent import LDPE range in Turkey is reported $20-40/ton higher on the week at $1320-1340/ton CIF while import LDPE prices to China are reported $10-20/ton softer at $1270-1370/ton CIF this week.
A similar picture is being drawn in the delta between China and Southeast Asia as Southeast Asia regained its premium over China last week after having traded below China for several months.