by Merve Madakbaşı - mmadakbasi@chemorbis.com
Prolonged supply issues gave Turkish PVC players a rough ride throughout the second half of 2020, with tightness sparking the longest-ever uptrend in the country. Recently, a bunch of developments has signaled that the market may have finally reached the ceiling. 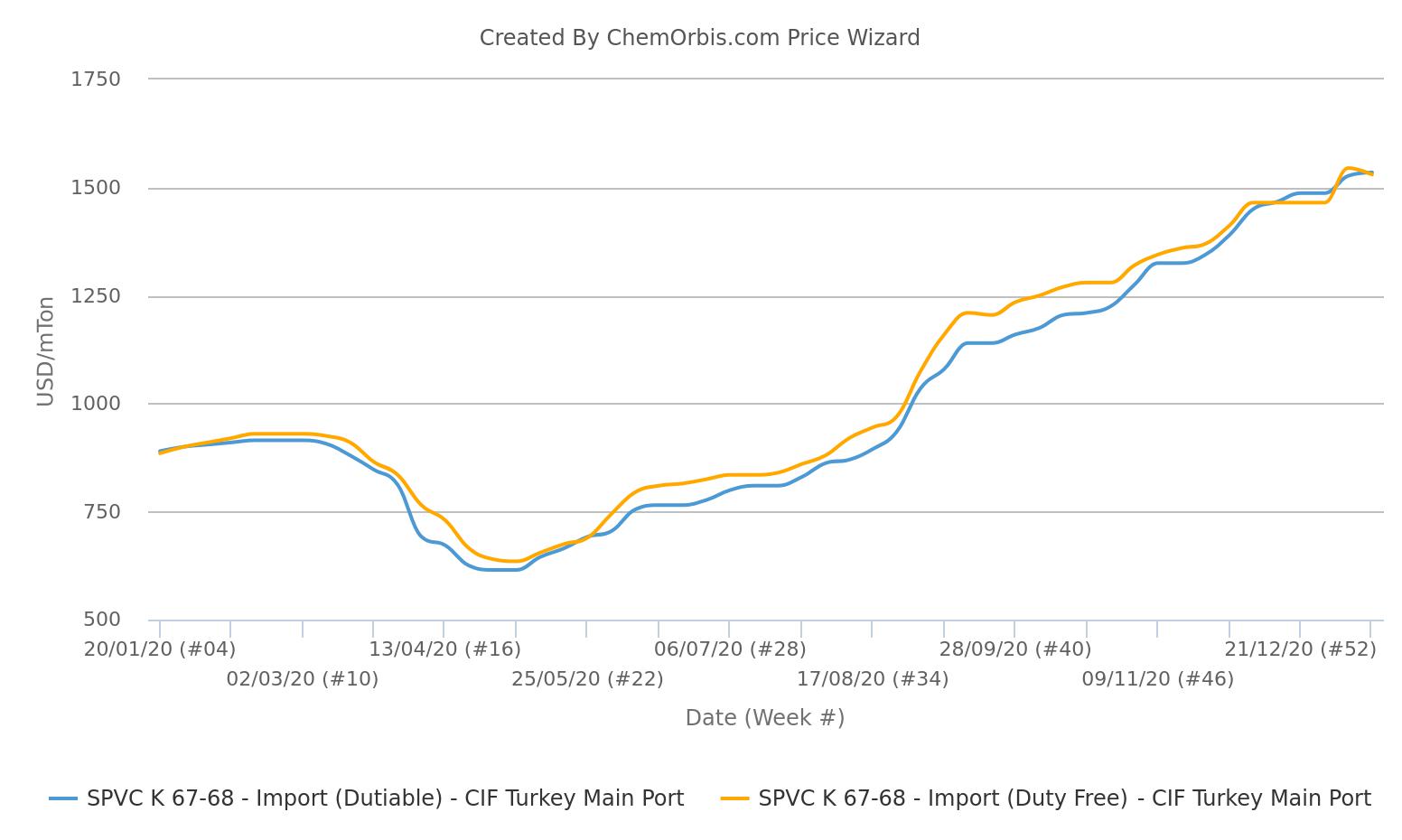 Import sellers trimmed hikes for the first time in 8 months

Indeed, the market opened the new-year on a firm footing particularly on the sellers’ side. Higher upstream costs coupled with still-limited availability continued to lend support to suppliers on their pricing in early January. At the same time, a resistance built up among buyers toward offers at or close to the upper ends of the market.

A profile maker commented, “There is no way we can compete in export markets as we are paying the highest raw material prices across the world. PVC offers have already been inflated for a long time now. The market has probably reached its peak.”

Some large traders admitted, “European PVC K67 tested a new high of $1600/ton CIF Turkey or even above. However, these levels proved to be unworkable since some buyers are already covered for now and they are unwilling to pay inflated prices anymore.”

European and US producers experienced unplanned outages or scheduled turnarounds since around Q3 2020 up until recent days. Turkey was among the markets affected most by the absence of its major import suppliers at a time when pent-up demand for housing led to a brisk end business.

Nonetheless, tightness started to gradually improve starting from late 2020 with some PVC producers resuming offering to Turkey even for modest volumes. Although availability has yet to return to comfortable levels, the news that France’s Kem One and the US Westlake lifted force majeure on their PVC supplies in January provided some relief to the market.

Slightly subdued activity in end markets appears as another factor that dimmed the sentiment for the days ahead. According to data from the Turkish Statistical Institute (TurkStat), house sales plunged by 47.6% in December compared to the same month of the previous year. Sales followed a downward trend since September last year after steadily surging for the most part of last year.

Turkey’s atypical premium over Europe weighs on the market

Projections for improved supplies and already overrated price levels in Turkey caused early February expectations to weaken. According to ChemOrbis data, the weekly average of duty-free PVC K67 prices in Turkey carried a premium beyond $300/ton over Europe.

In healthy market conditions, Europe traditionally carries a premium over Turkey considering the fact that the region’s local markets trade prompt cargos including all applicable duties and inland delivery costs.

Wavering uptrend in Asia cast a pall on sentiment

The Asian market was on a run-up for almost 9 months with increases speeding up particularly in October-December since force majeure events in the US and Europe exacerbated the supply tightness across the globe.

However, recently, the uptrend has lost steam in the region as a Taiwanese major opted to issue a smaller hike to the region for February compared to the previous months. Unexpected rains in India partially played a role in the recent scene as they mitigated the impact of sky-high freights and tight logistics on activity.

Turkish players believe that the faltering firming in Asia ahead of the New Year holidays in China may also influence other major markets. A participant opined, “We expect supplies from Europe and the US to improve further next month. Particularly European producers will need to narrow the large gap between their prices to their own markets and export destinations, primarily Turkey.”

Once freight rates cool off, PVC prices in Turkey will start to see downward corrections and competitive Asian offers may show up in Turkey at that time, according to some buyers.