by ChemOrbis Editorial Team - content@chemorbis.com
Asian PS markets continue to stay indifferent to the scheduled turnarounds at several upstream and downstream plants across the region. Suppliers reduced their PS offers further to China and Southeast Asia this week given falling production costs and scant demand from buyers.

PS producers and traders issued decreases ranging between $40-70/ton, with some of them voicing their intentions to negotiate further on their current price levels in case of firm counter bids since deals are scarce these days. “Converters are still buying hand to mouth even after our recent price cuts,” sellers complained.

Spot styrene prices have dipped to the 6-month low recently, according to the average price data on ChemOrbis Price Wizard. Prices plunged by almost $75/ton on a FOB Korea basis week over week, following a short-lived rebound in the styrene market earlier in April. Similarly, spot benzene and butadiene costs posted drops of $40-50/ton on the week with the same terms. The main trigger behind these declines was falling energy costs on the NYMEX, where crude oil futures moved down to settle around $50/bbl by mid-week. 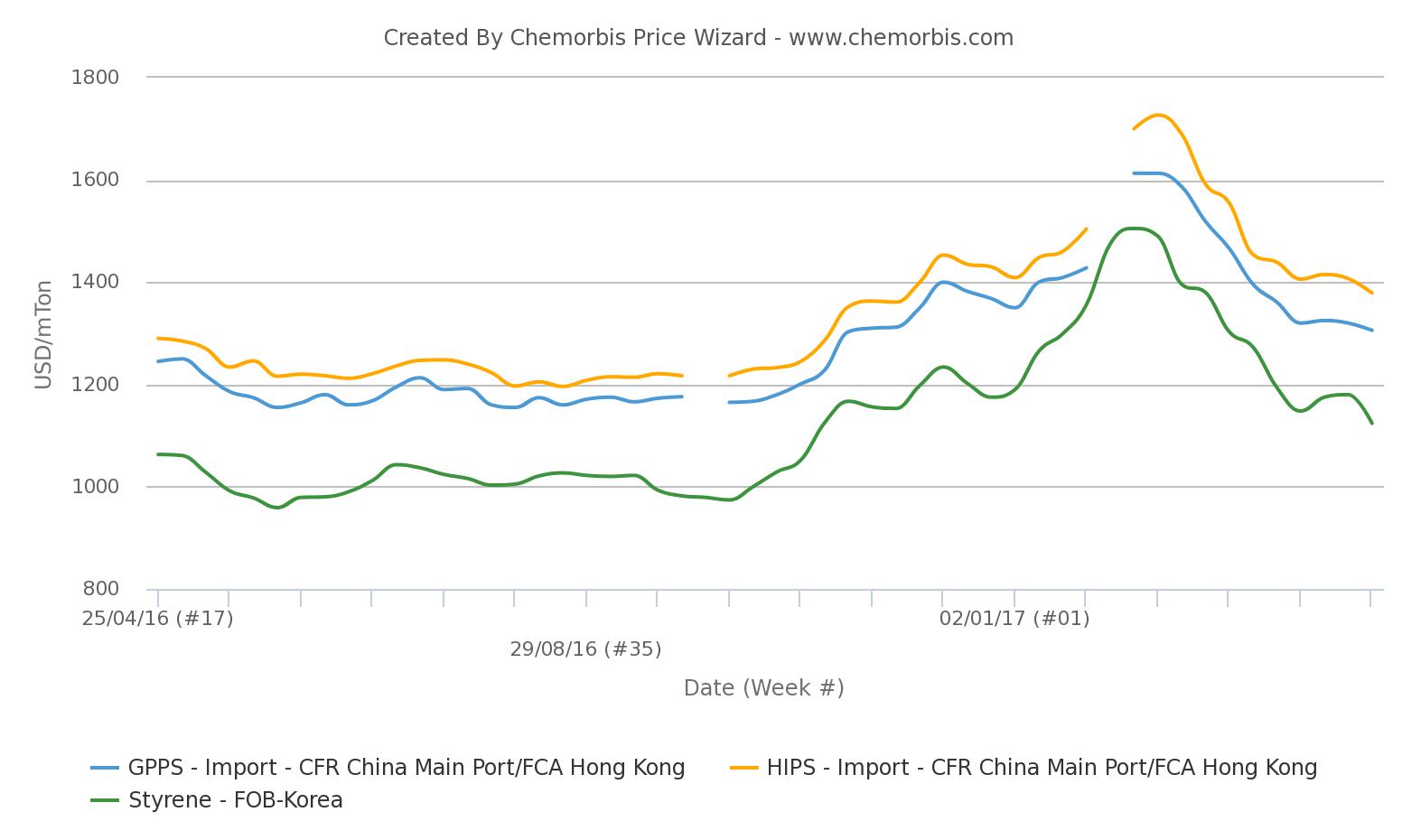 A source from a Chinese PS producer reported that they lowered their offers by $40-50/ton for GPPS and $50-60/ton for HIPS. “Local styrene stocks in the eastern part of China remain high despite aslight drop recently, which came on top of some styrene cargos arriving to the ports in China. The market needs time to digest them. We attribute this to the fact that the environmental inspections forced some downstream manufacturers to reduce their output. We still hope the demand from PS consumers to recover by late April,” he stated.

A Taiwanese producer applied decreases of $50/ton both for GPPS and HIPS to the Chinese and Southeast Asian markets. A producer source reported, “We are open for additional discounts of $20/ton for GPPS and $30-40/ton for HIPS considering the weak demand. Buyers are either purchasing on a needs-only basis or remaining out of the market. They are not rushing to make purchases since they have already replenished some inventories ahead of turnarounds in Taiwan, South Korea and Japan.

Looking ahead, sellers are not projecting a shift in the trend over the short term. “Buyers plan to limit their purchasing volumes for a bit more time as they believe that PS prices still have some room to move down due to the recent fall in energy costs. We don’t expect the recent shutdowns in China to have a major impact on the outlook as the country mostly rely on imports,” commented a supplier.

A trader in Indonesia received $30/ton lower PS prices this week and predicted that both GPPS and HIPS offers may go down further next week unless a rebound occurs in upstream markets. A manufacturer in the country confirmed, “We are hesitating to buy PS nowadays as we received two decreases in a row from our Southeast Asian supplier within a week.”

Meanwhile, a South Korean PS maker elected to issue $30/ton lower HIPS prices as they still have some material left for April shipments. “Although demand is slightly better than March, it is still not satisfactory. Several styrene and butadiene units have been undergoing maintenance, but this was counterbalanced by high stocks at ports,” a producer source noted.