Naphtha trades below $300/ton in Asia and Europe

by ChemOrbis Editorial Team - content@chemorbis.com
According to weekly average prices on ChemOrbis Price Wizard, naphtha prices in both Asia and Europe are currently standing at multi year lows as crude oil prices have moved back below the $30/barrel threshold.

In Asia, naphtha prices broke below the $300/ton threshold to be currently reported between $280-285/ton CFR Japan. This is down around $30/ton from a week earlier.

In Europe, naphtha prices responded to lower oil prices earlier than Asia and have been hovering below $300/ton for a while. Currently, naphtha prices are reported at $265-270/ton CIF ARA, down $30/ton on the week. According to weekly average prices, current prices represent the lowest levels seen since early 2009. 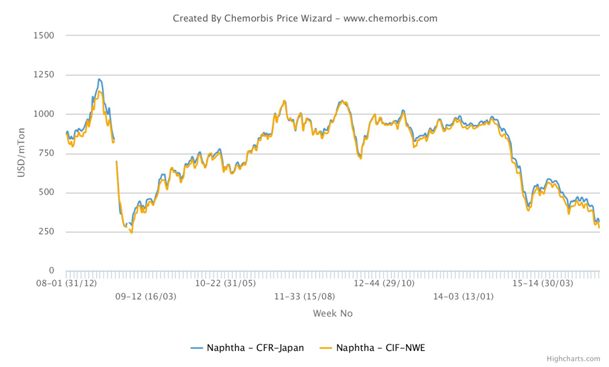