by ChemOrbis Editorial Team - content@chemorbis.com
Players in Europe are wrapping up their January PS transactions with monthly increases of €100-110/ton. A new round of price increases are on the near horizon due to climbing production costs throughout January which pushed buyers across the region to pre-buy material in order to avoid higher prices in February.

Spot styrene costs in the region are recently standing at the highest levels of 18 months, according to ChemOrbis Prize Wizard. They surged by $115/ton on FOB NWE basis over the week to hit above the $1400/ton threshold, with the most recent figures representing an increase of more than $200/ton since January started. Moreover, the outlook for the feedstock remains firm as Trinseo plans to shut its styrene unit in the Netherlands by mid-February for a turnaround that will last 3 to 4 weeks.

Along with limited styrene supplies, surging spot benzene prices also pushed the styrene market up as they were up $95/ton during the last one week and $240/ton during January, on CIF NWE basis. Similarly, spot butadiene prices soared $175/ton on FOB NWE basis week over week to reach $2200/ton threshold owing to limited availability and healthy demand. 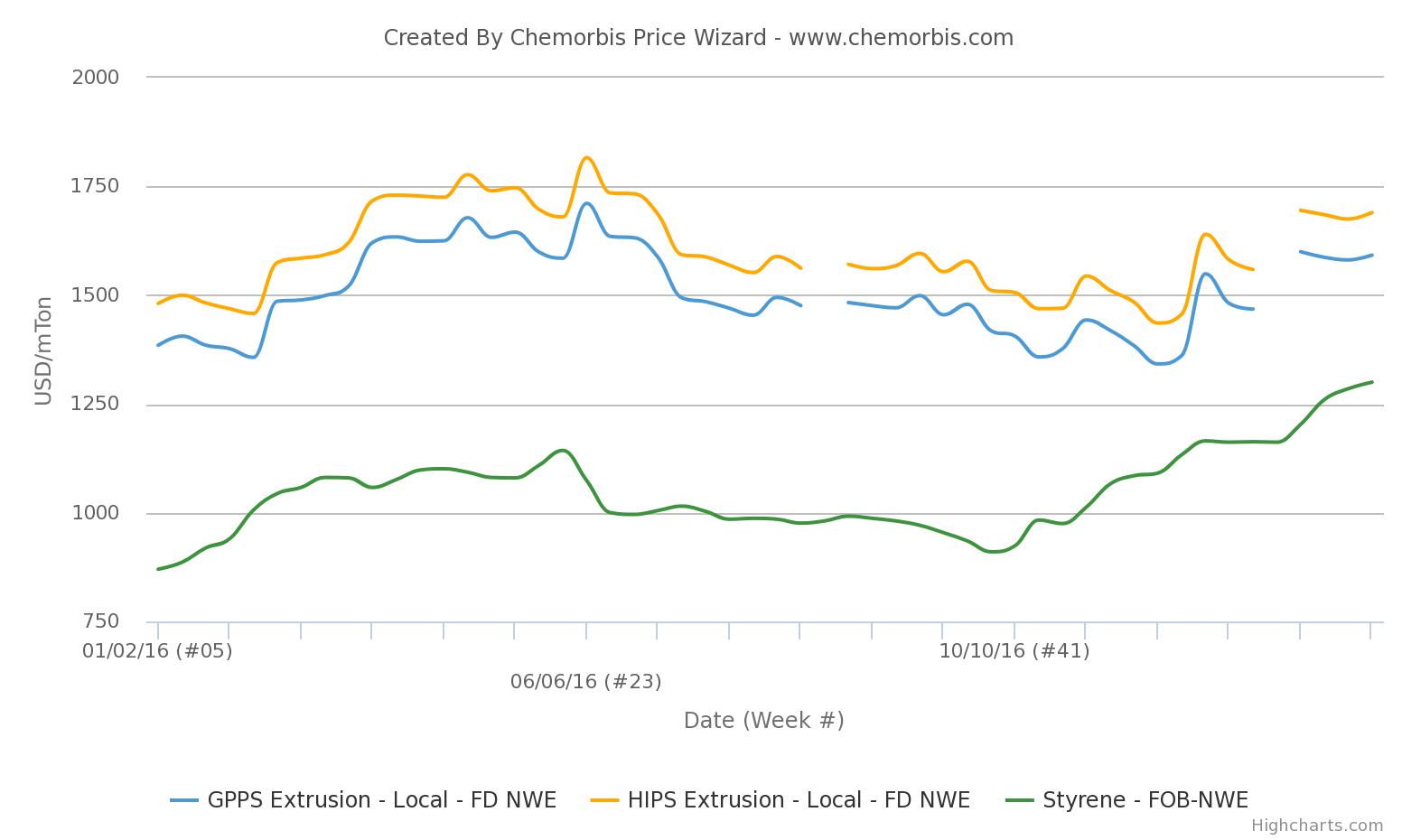 After paying three digit hikes for the first month of the year, downstream PS converters in Europe are now expecting a new wave of hike requests from their suppliers. Expectations are widely expressed for increases ranging between €50/ton to €100/ton.

In Italy, a container manufacturer reported, “We built some inventories to be covered until March as we expect further increases for the next two months. We heard that the PS market may experience €50-60/ton increases from sellers for February.” A buyer from the insulation industry, meanwhile, is using his stocks on hand in order not to face new price increases, pointing to his slow end business given harsh weather conditions.

A packager in Belgium expects to hear increases of up to €100/ton. “We paid three digit hikes this month. Although we asked for some extra quotas from our West European PS supplier, but we were not able to procure material as the seller received many inquiries for additional volumes in the second half of January.”

Distributors also confirmed seeing satisfactory buying interest for PS these days. “We sold our materials with €100/ton hikes and demand was quite pleasing due to firmer expectations for February offers,” a seller in Italy noted. Another distributor closed his GPPS and HIPS deals with €100-110/ton increases in Germany. “Demand has been vivid while styrene contracts may record hikes between €40-70/ton soon. Meanwhile, the gap between GPPS and HIPS may widen considering the large jump in butadiene costs,” he opined.