by ChemOrbis Editorial Team - content@chemorbis.com
Several PP and PE capacities have been started up across the globe so far this year while many others are slated to come online in the second half of 2017 and afterwards. Global polyolefin players voice their concerns over growing supplies which are likely to exert pressure on PP and PE in the coming term.

In other countries including Canada, the USA, India and Iran, some of the capacity additions in 2017 are listed below. 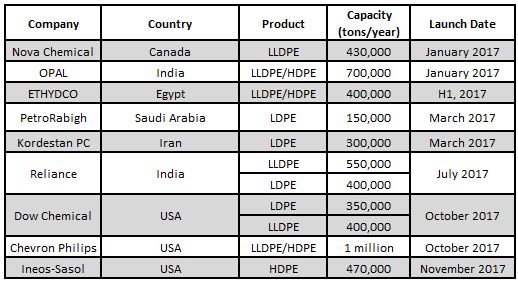 To track the most updated PP and PE production news, please see Production News (For members only)

As for PP, China has added a considerable amount of new capacity so far. Qinghai Yanhu’s new PP plant came online on April 26. The plant is able to produce 160,000 tons/year of PP. Zhong Jiang Petrochemical also launched its 350,000 tons/year PP plant in April.