by Manolya Tufan - mtufan@chemorbis.com
Asian styrenics markets witnessed hike attempts over the week after a stable to slightly softer trend in the past couple of weeks. The bullish push on prices was attributed to restocking activities in China and an ongoing tightness in the region. This counterbalanced lower spot styrene prices in the region.

Spot styrene prices on CFR China basis fell for the second straight week to $675/ton, while prices on FOB Korea basis also dropped to $650/ton, according to ChemOrbis data. Both stand at their lowest levels since H2 June.

Market sources pointed to high inventory levels and waning demand as factors that weighed on the styrene market.

ABS up more visibly than PS

Prices posted gains with the support from restocking activities in China as well as firming crude oil futures that supported ACN and butadiene prices. Suppliers also renewed confidence on the back of positive economic data including higher July exports and the growth in the manufacturing sector, which indicated the third straight one in June .

Chinese buyers were again actively buying spot PS cargos after suspending their purchases for the last 3-4 weeks, as a player put it.

Asian producers issued hikes of $10-20/ton on PS while larger increases of up to $50/ton were revealed on ABS offers. ABS prices indicated more visible gains, as can be seen in the below graph formed by ChemOrbis Price Index. 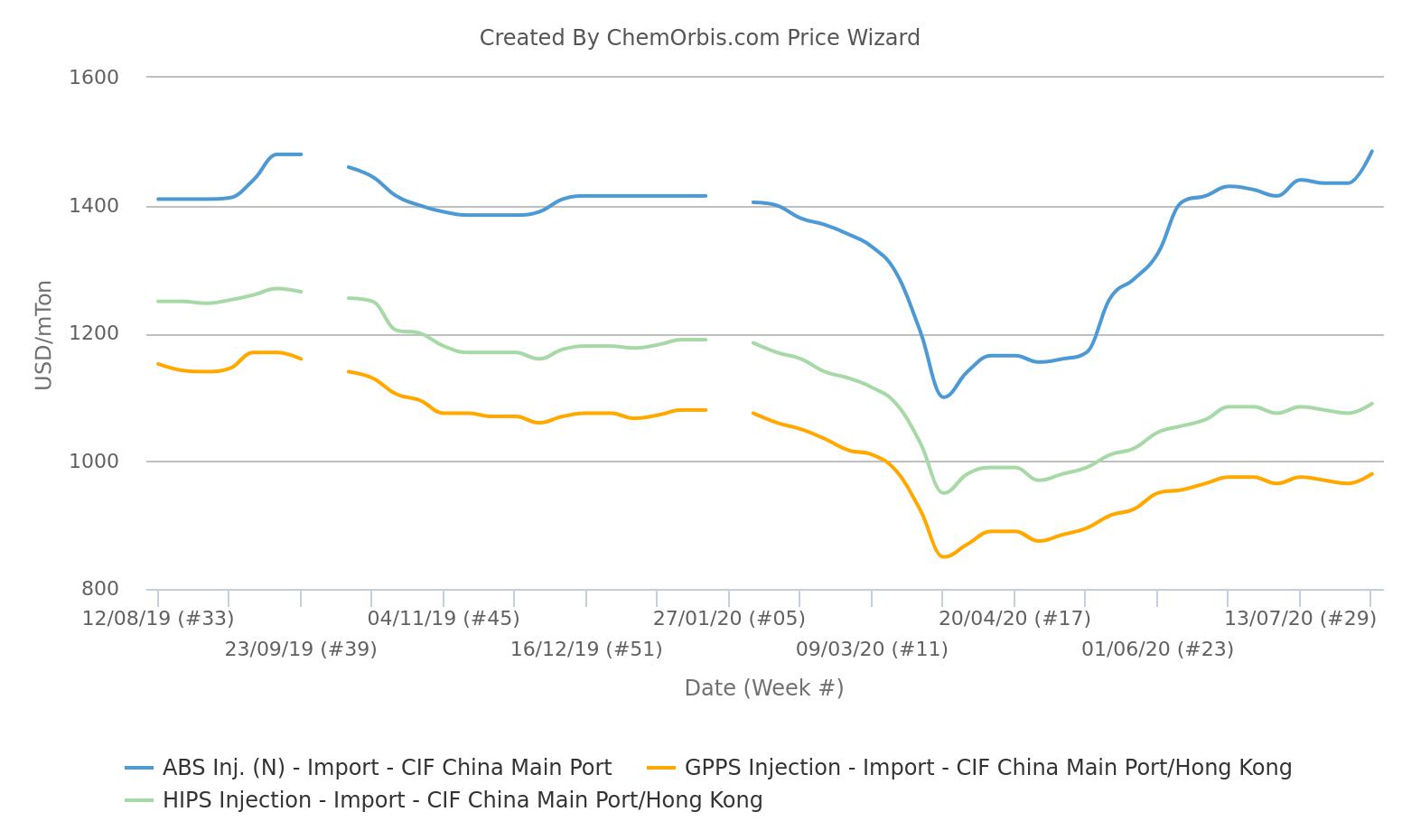 In Southeast Asia, Import ABS and PS prices mirrored the recent firming trend in China. ABS prices rose by $50-70/ton, putting an end to a month long softening trend. As for PS, prices followed a stable to slightly firmer trend.

Regional demand started to improve following the easing of lockdowns and firming crude oil prices. Although the pace of gains lagged behind China, offers at higher levels saw acceptance among buyers.

Regional tightness is unlikely to ease in the near term amid ongoing and upcoming turnarounds. This is expected to keep the market firm particularly if restocking activities continue. “The ongoing supply tightness across Asia is likely to be felt throughout August,” a player opined.

However, Vietnam and the Philippines reimposed some of the restrictions amid a new round of COVID-19 infections. The imminent Chinese Ghost Month Holiday in mid-August may weigh on buying appetite in the days ahead.

A distributor in Vietnam reported, “Buyers shy away from bulky purchases as they want to see how the resurgence of coronavirus cases will affect the market.”