PVC producers have mostly approached the market with increases ranging from €42/ton to €50/ton, reflecting the entire half of the ethylene hike or slightly beyond that to boost their margins. There are only a few producers, who are seeking increases beyond €50/ton, meanwhile. Suppliers reported that they started to receive increased inquiries after delayed settlement of the monthly ethylene contracts.

Good export sales as well as lower production rates on the producers’ side paved the way for reduced supplies in the region. Players also reported that regional suppliers’ allocations are limited amid unconfirmed production issues.

With the support from reduced supplies and recovering demand, some suppliers have already achieved increases of €42-45/ton on July PVC deals. This brought Italy and Turkey’s PVC markets somewhat into balance as Italy’s spot K67-68 market regained its premium over duty-free K67-68 prices in Turkey, as can be seen on the below graph formed by ChemOrbis Price Index. 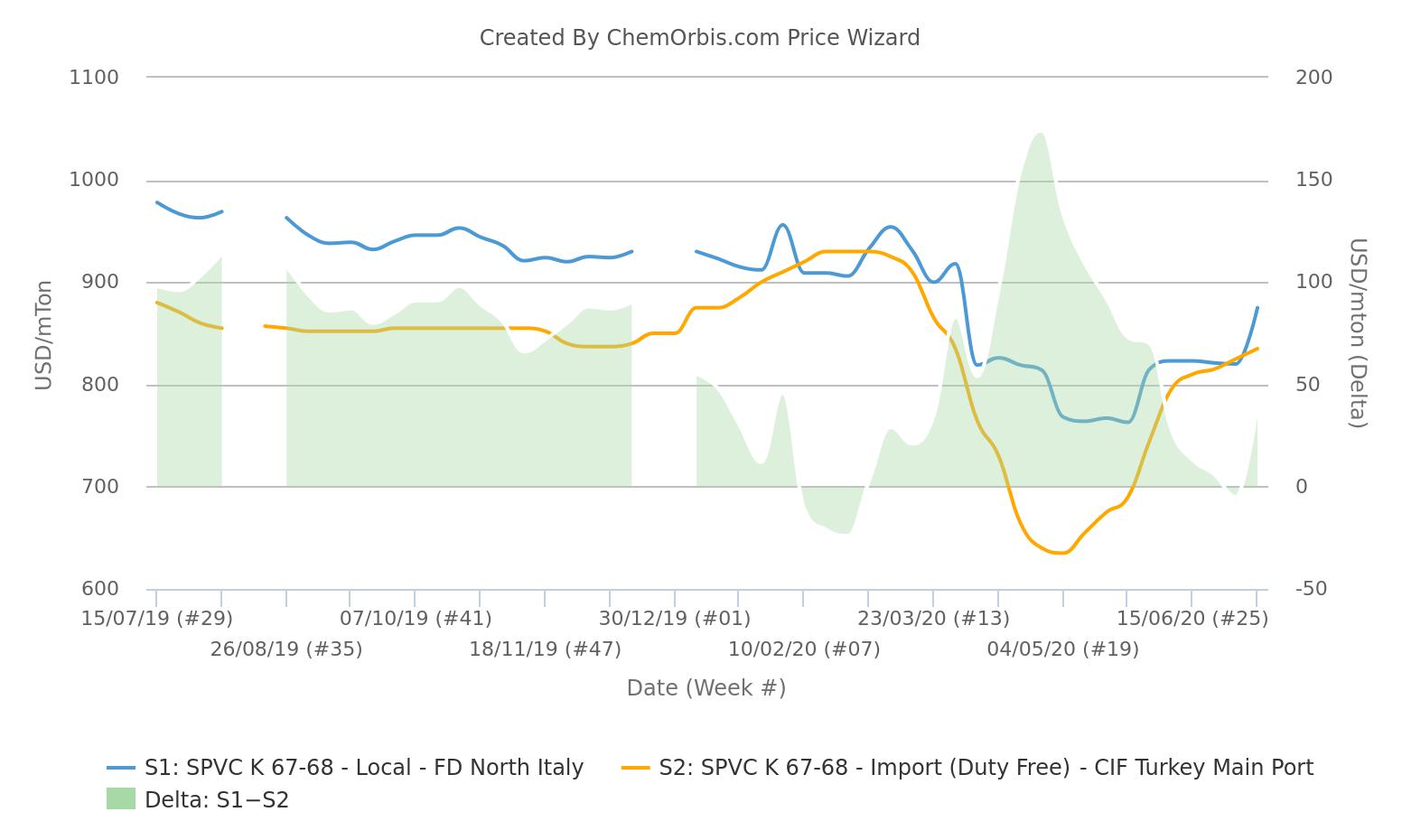 Italy traditionally carries a larger premium over Turkey considering the fact that Italy’s local prices are for prompt cargos including all applicable duties and inland delivery costs, while Turkey’s duty-free PVC market is on CIF, cash terms. European suppliers may shift their attention to their own local markets rather than exports.

A pipe maker said, “July is high season for pipe business. Plus, we are also hopeful about the September-October period as government incentives on the building sector and infrastructure projects may give support. In August, we may work more than last year.”

Summer holidays lurk around the corner

Buyers seem to be unwilling to pay more than 50% of the ethylene hike, which may result in slight revisions later in the month. The majority of them expect to receive more offers before starting to negotiate, while some buyers have placed lower bids that suggest €40/ton hikes.

Purchasing volumes are still lower compared to the pre-virus period no matter how far demand improved following the end of the lockdown period. Converters may continue to stick to needs only purchases due to still lower rates at their manufacturing plants and the lack of clarity about the upcoming term.

There are divergent views regarding what will unfold in the markets during the summer period. Some players are arguing that August may not be as calm as expected if converters keep their lines open to compensate lockdown losses. “Apparently, manufacturers will decide whether they will go on vacations or not depending on their order intakes,” a player argued.

Producers aim to achieve the entire half of the ethylene upsurge as the month wears on. A regional producer source reported that there may be no room for margin recovery this month, while they will not concede to any discounts. He added, “We have no extra quotas for the month. This is due in part to our large sales volumes in June.”