Price gap between PP and PE widens in China

by Merve Sezgün - msezgun@chemorbis.com
Data from ChemOrbis Price Index reveal that the gap between import PP and PE prices in China has been widening since around May due to the fact that the PP market has witnessed smaller drops when compared to PE.

As can be seen in the graph below, both products have been largely tracking a downward trend for around five months if the short-lived rebounds in July and in September are disregarded.

When compared to early May – roughly the beginning of the downturn – the weekly average of homo-PP prices on CIF China basis has decreased around $140-145/ton to recently hit its lowest level since July 2017.

The weekly average of import HDPE film prices, meanwhile, is currently $225/ton lower than early May, continuing to hover around a decade low. As for LDPE and LLDPE film, the weekly averages are down by around $180-190/ton when compared to five months ago. 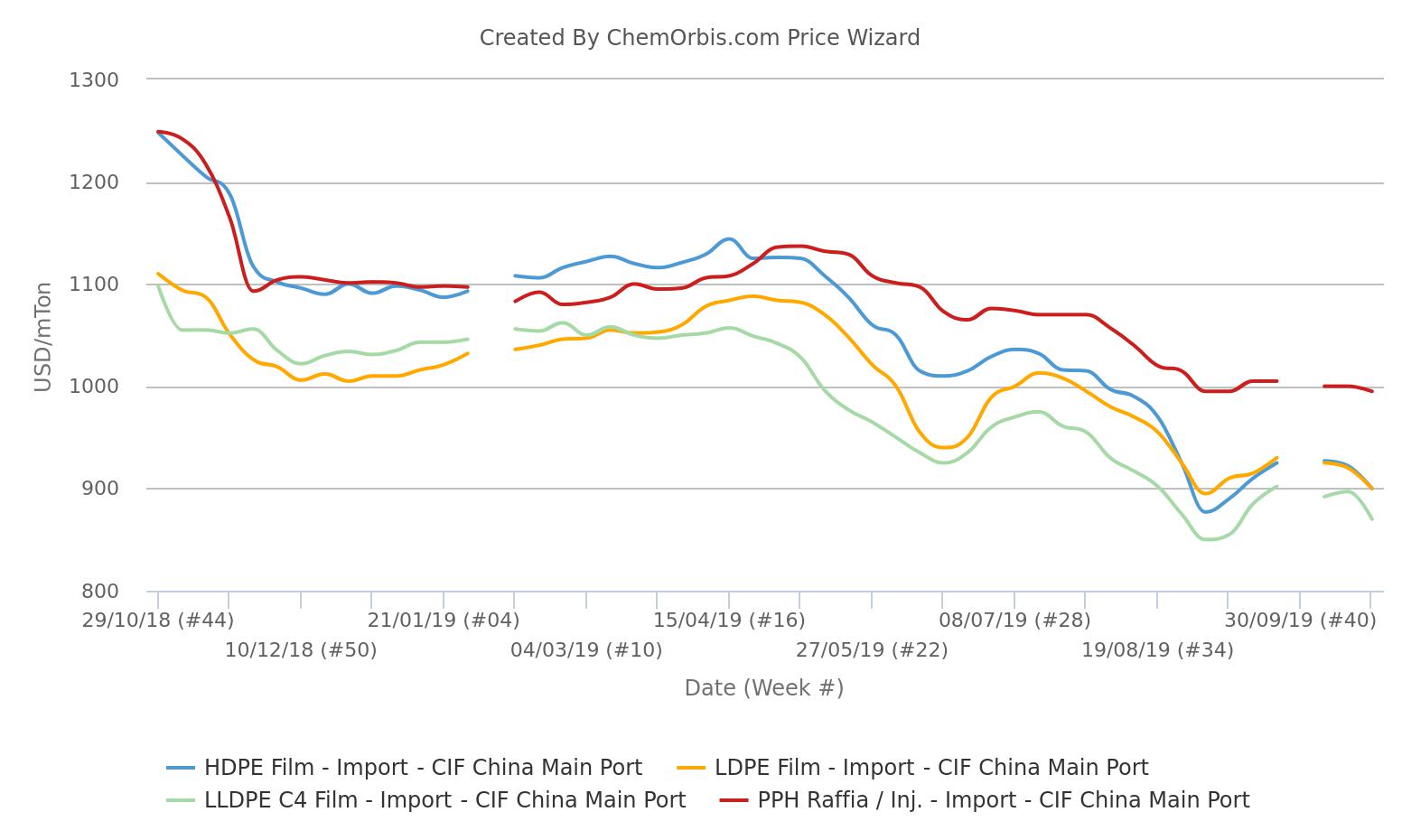 As a result, the homo-PP market is currently standing $95/ton above HDPE and LDPE film while it carries a larger premium of $125/ton over the weekly average of LLDPE film prices.

Back in early May, the gap between homo-PP and HDPE prices was only around $10-15/ton. In April, the LDPE film market was standing $25/ton below the weekly average of import homo-PP prices.

In line with the growing domestic production for homo-PP, China is becoming self-sufficient and its dependency on imports is reducing. Hence the price trend for PP is largely shaped by internal fundamentals rather than global trends – unlike PE.

As for PE, ample supplies and bearish price trends across the globe have significantly weighed on the market in China so far this year, several players agree.

China’s HDPE and LLDPE imports from the US have sharply declined since the trade war kicked off last year. In the meantime, other global PE producers, particularly in Saudi Arabia, have started to increase their export allocations to China notably as they have been facing stiff competition from low-priced US PE in other outlets.

In the January-August period, China’s HDPE imports from Saudi Arabia surged 31% on a yearly basis to reach almost 1.4 million tons, according to data from ChemOrbis Import Statistics. The country’s overall HDPE imports in the same period rose 16% year on year to hit a record high.