by Jennifer Lee - jlee@chemorbis.com
Asian producers have managed to shun the slump in olefin prices in the past four week through disciplined rate cuts that have been in place almost since early June. While ethylene prices have erased gains slightly this week following a big jump, propylene prices have remained firm.

Asian ethylene prices have corrected down $20/ton this week to be assessed at $960/ton CFR China and at $950/ton CFR Southeast Asia, as of September 21.This correction came after two weeks of stability and a hefty hike back in early September, as most buyers have covered their shortfalls, said traders. Demand for ethylene has waned across Northeast and Southeast Asia for now, traders commented.

Unlike ethylene, propylene has not shown a major rebound. Rather, they have fluctuated in a narrow range at and below $900/ton CFR China due to run rate cuts after a 5-month-downturn. However, this week they have climbed $20/ton higher to be assessed at $900/ton CFR China, and at $920/ton CFR Southeast Asia on tightening supply in China due to extended maintenance turnarounds at major PDH plants, as well as recent shutdowns. The ongoing scheduled PDH plant turnarounds have also bolstered propylene prices for a while. 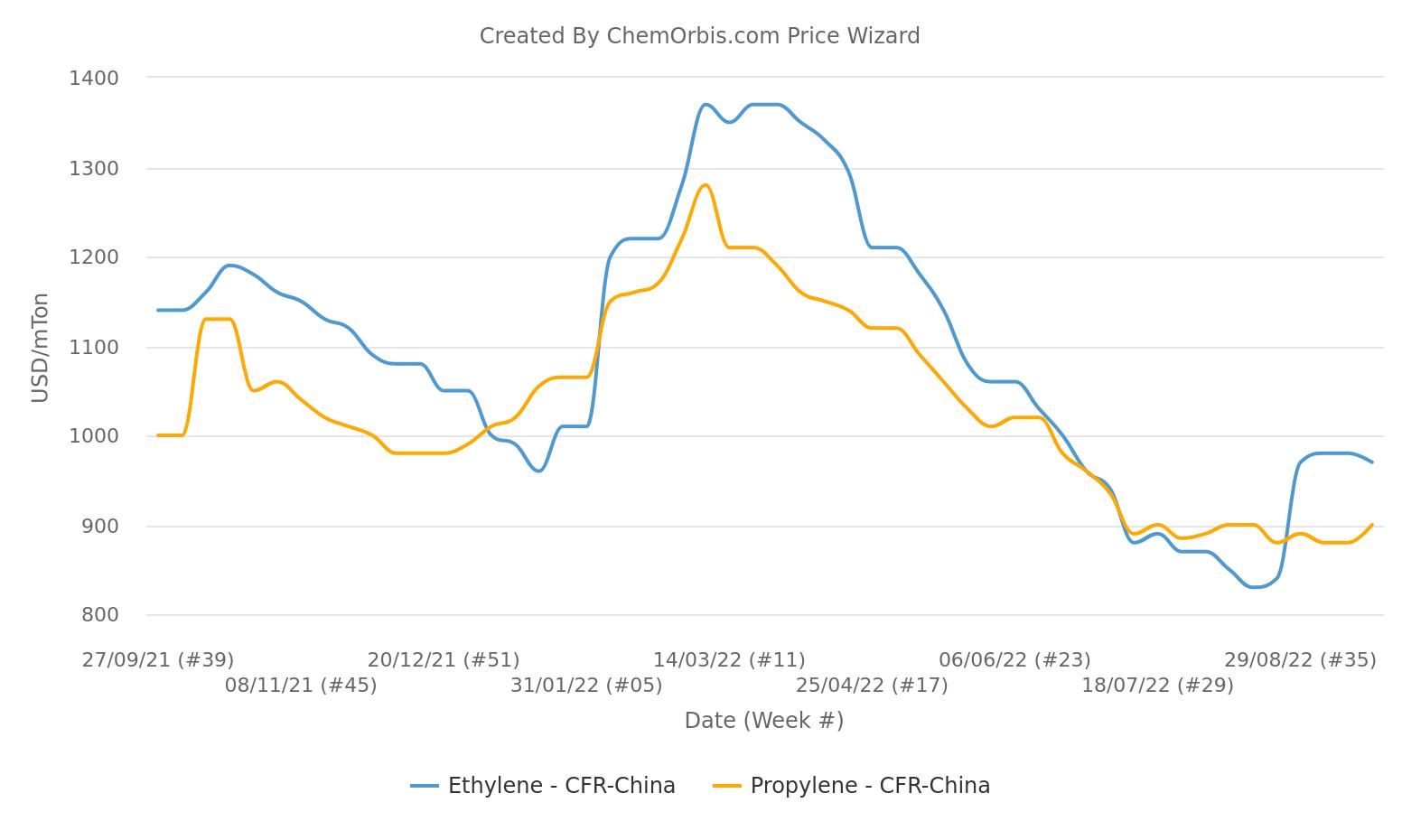 China’s propane dehydrogenation (PDH) plants are still undergoing various maintenance turnarounds since late July and August, which have continued to underpin propylene prices. Additionally, several PDH plants have extended their turnarounds into early to first half October, further tightening October propylene supply in China. The average PDH operating rates are reported around 70-75%, according to industry sources. CFR China buy indications for propylene have edged up to $880-890/ton, whilst offers have held above $910/ton CFR China for August arrivals.

Qixiang Tengda’s new 700,000 tons/year PDH facility, located in Shandong, was taken down for a maintenance turnaround in late August, and will likely be restarting only in October.

Ningbo Kingfa had shut its 600,000 tons/year propane dehydrogenation (PDH) facility since late July. The reasons for the shutdown were not specific but some market participants cited weak margins. The PDH plant’s restart has been extended to early October, said traders.

Oriental Energy’s 600,000 tons/year PDH plant located in Ningbo, had been shut since August 1 for maintenance turnaround. Some traders also cite poor margins for the extended turnaround. The PDH plant will likely also restart during the first half of October.