by ChemOrbis Editorial Team - content@chemorbis.com
The year 2015 witnessed volatile price changes in many polymer markets in line with dampening crude oil prices. Saudi Arabia, traditionally a major PP exporter to many markets, lost share in China and Turkey in 2015 whereas its exports to Europe rose.

According to ChemOrbis Import Statistics, China’s homo PP imports from Saudi Arabia were down by 10% in 2015 on a yearly basis, while total homo PP imports shed 6% on the year. According to market sources, China’s domestic PP production capacity rose by 6.4% in 2015 on a yearly basis, which exactly coincides with this loss in imports. In line with the growing domestic production for homo PP, the need for imports is expected to decline further in the world’s largest spot market until it becomes self-sufficient.

In Turkey, overall homo PP imports were only marginally higher on the year, but hit a record high. However, Saudi Arabia’s share in overall homo PP imports was down by 13% in 2015 on a yearly basis, a more considerable fall when compared to the drop seen in China. Saudi Arabia appears to have lost its share in Turkey to Egypt and Iran, both of which posted striking gains in their homo PP exports to Turkey.

When it comes to Europe, homo PP imports from Saudi Arabia moved up by 10% on the year, according to data retrieved from Eurostat. Saudi Arabia maintained its position as the major import supplier in the homo PP market.

The reason behind Saudi Arabia’s growing appetite for market share in Europe last year was mostly the favorable netbacks in this region when compared to China and Turkey. In these two countries, homo PP prices fluctuated within large ranges throughout 2015.

According to ChemOrbis Price Index, there was a price gap of $522/ton between the bottom and the peak price of 2015 in China’s homo PP market while the gap in Turkey was wider at $612/ton on average. Plus, nearly two-thirds of 2015 witnessed a downturn in both countries. Therefore, Saudi Arabian suppliers appeared to have refrained from offering as much as usual to these markets, preferring to divert their cargoes to Europe for better margins.

This is also confirmed by the record high premium Europe carried over Turkey in 2015 as can be seen from the graph below. The gap between Italy’s local market and Turkey’s import market excluding all applicable duties grew to as large as $400/ton while it was mostly around $150-350/ton for the most part of the year, although there was usually a gap of $150-200/ton in the previous years. 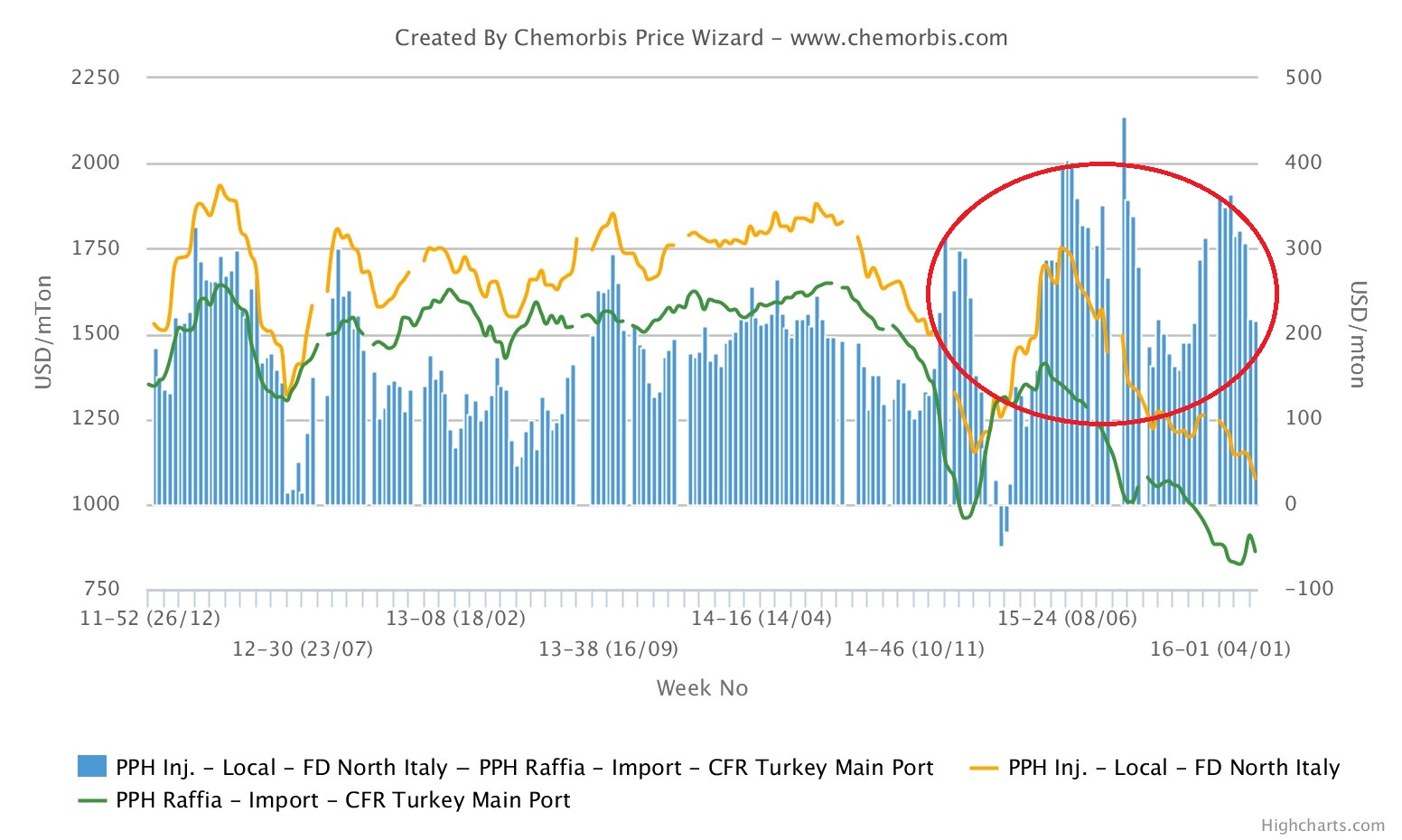