by ChemOrbis Editorial Team - content@chemorbis.com
In Southeast Asia, import PE prices remained on a downward trend last week, defying the recovery in the nearby Chinese market. PP, on the other hand, had a partial response and witnessed some hike attempts amid renewed confidence among some sellers.

In the region’s LLDPE film market, the overall range for import prices registered fresh decreases of $10-30/ton from a week earlier, sustaining the downturn that has been mostly in place since the beginning of June. The weekly average shows the lowest levels of more than 9 years, according to ChemOrbis Price Index.

Import HDPE film prices also continued to retreat, posting larger drops of $40-70/ton on the week given the pressure from mounting supplies. The current weekly average represents the lowest level seen since early 2016, based on data from ChemOrbis Price Index. Disregarding a short firming trend in May, HDPE has been largely on a softening trend since February.

As for the homo-PP market, the weekly average of overall import prices on CFR SEA basis largely stabilized at its lowest level since November 2017, according to data from ChemOrbis Price Index. 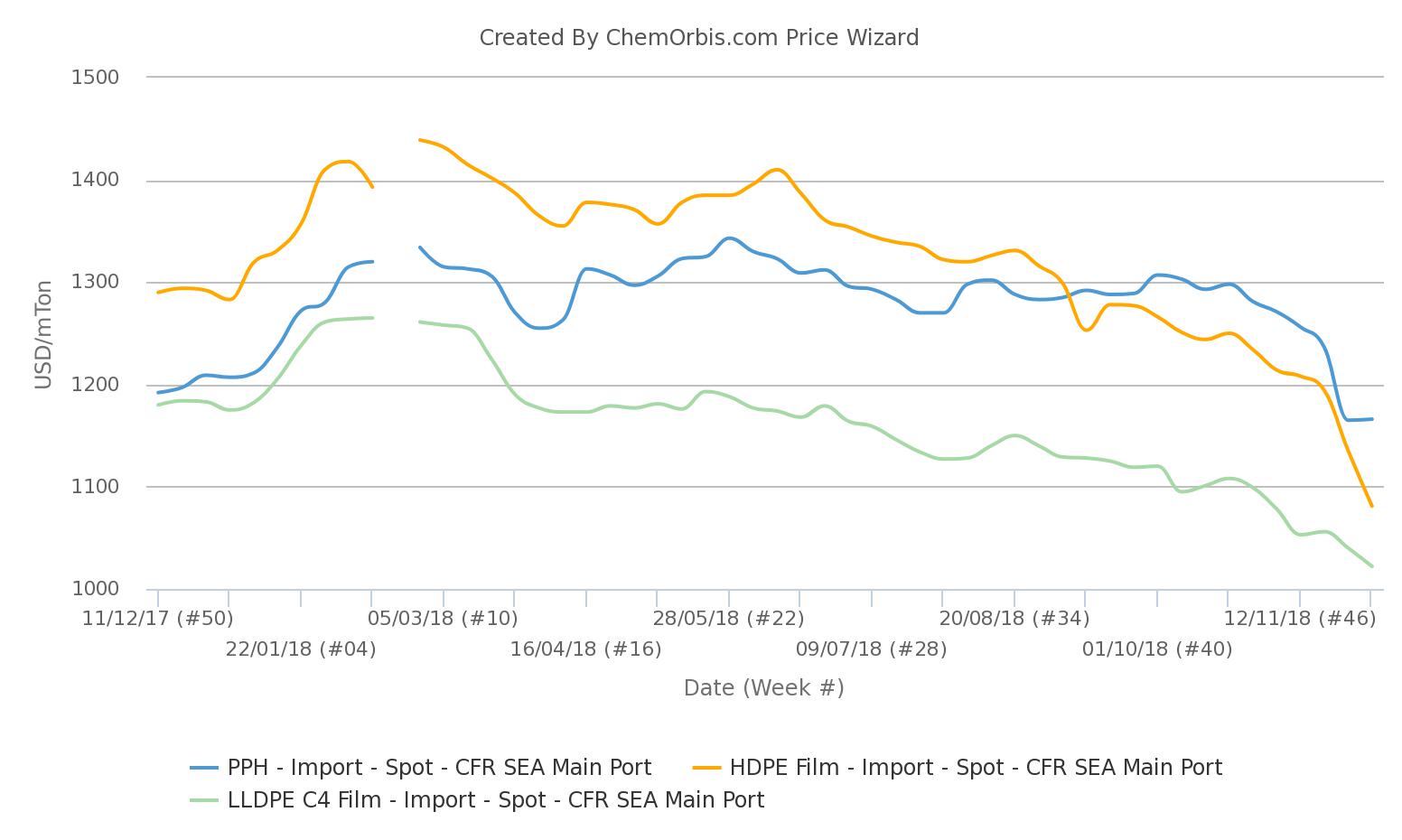 PE under the pressure of increasing supplies from the US

Players noted that the region’s PE market was unresponsive to slightly higher offers in China since demand remained subdued in the face of rising supply levels amid the year-end lull.

A trader operating in Malaysia opined, “PE continues to face pressure from ample availability as the excess supply from the new capacities in the US is mostly destined for Southeast Asia. We are receiving an increasing number of offers for US PE nowadays.”

Despite admitting that overall demand was still limited, several players in Southeast Asia agreed that the sentiment partially improved for PP after prices showed a cautious rebound in China.

“Some PP sellers are still eager to give discounts, believing that the temporary trade truce between China and the US is not enough to clear away the uncertainty hanging over the future direction of prices. Nonetheless, there are others who try slight hikes to test the market reaction,” commented a regional trader.

Propylene rebounds from its lowest since July 2017, ethylene extends falls at 3-year-low

In the upstream markets, meanwhile, spot propylene prices on FOB South Korea basis have slightly rebounded after hitting their lowest levels since July 2017 on the back of improved demand. On the other hand, spot ethylene has extended its falls given ample availability to reach a more than three-year low.