by ChemOrbis Editorial Team - content@chemorbis.com
In Southeast Asia, the gap between LLDPE and HDPE prices has hit a 5-year high recently, according to ChemOrbis Price Wizard, where average import prices for both products are compared. The gap between import HDPE and LLDPE prices was at $76/ton as of the first week of August, indicating the widest gap since the first quarter of 2011. 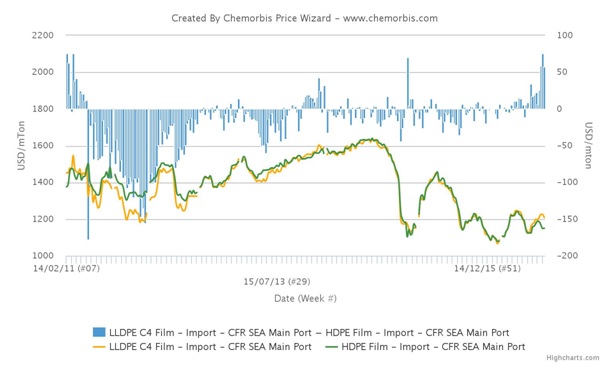 Players attributed the widening gap to the weaker demand and higher inventories for HDPE while demand for LDPE and LLDPE is relatively better due to limited availability.

An Indonesian trader commented, “We feel sales pressure, particularly for HDPE film. We are trying to clear our stocks for now and think that the market will track a downward trend in the near term.”

A distributor in Vietnam opined, “LLDPE and LDPE supplies are limited and therefore demand is slightly better for these products. On the other hand, HDPE offers are still too high to be sellable for the time being. Buyers are waiting to replenish material again until the end of this month. Demand is weak as players have high inventory and current levels are not competitive."

A Malaysian trader noted, “Many customers limit their purchases to their needs in the expectation of further declines. We are not certain about the upcoming market trend for now. If there is no problem, Petronas will be having maintenance on its HDPE line from 21st to 26th of August.”