by ChemOrbis Editorial Team - content@chemorbis.com
The local markets in Turkey have added to their losses this week as silent demand and falling import prices from traders pushed the distribution markets further down for several products.

Activity was deemed quite calm for all products including PP, PVC, PE and PS ahead of fresh price announcements for the new month while the nearing referendum that will be held on April 16 as well as weak upstream markets kept converters on the sidelines heading to April.

“Many buyers seem covered for the time being and have no plan to buy material except for their basic requirements. They believe that prices have further room to go down for various products looking at weak trends in Asian polymer markets as well as the cooling bullish trend in Europe,” traders highlighted.

“Particularly PP raffia demand is discouraging since converters are in a waiting mood to observe parity movements in the pre and post referendum period before shaping their next purchasing plan. We are facing lower bids from our customers this week,” complained a distributor. 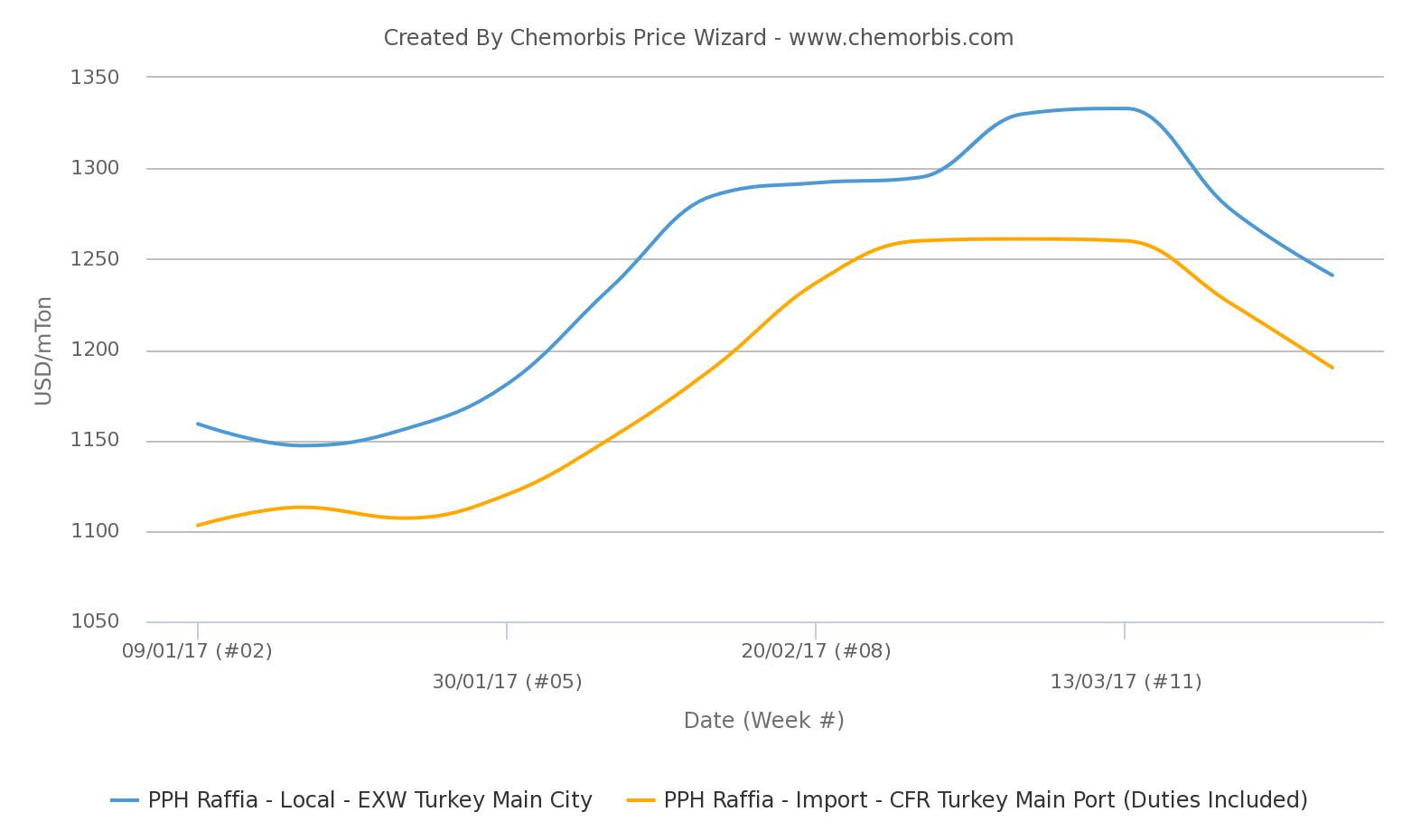 In the PE market, cash constraints combined with sufficient supplies brought a new round of price cuts from local resellers recently. LDPE prices plunged by $50/ton on the low end to $1650-1720/ton ex-warehouse, cash inc VAT. LLDPE offers were at $1490-1530/ton while HDPE film and b/m were respectively priced at $1480-1520/ton and $1485/ton, all down on the upper ends.

Players concurred, “Attractively priced Iranian PE materials weighed down on distributors on top of already slow sales in the recent couple of weeks. Expectations on the buyers’ side for lower import PE prices from the Mid-East and Iran also kept activity dampened moving into April.”

A buyer opined, “We did not feel the absence of Iranian sources despite the Newroz unlike the previous years since traders already replaced plentiful material ahead of the holiday, when demand lost significant steam.”

The lack of demand coupled with stable to softer import prices weakened the local PVC market as well this week with PVC k67 prices being reported at $1200-1215/ton ex-warehouse, cash inc VAT so far this week. A local seller cut his offers by $30/ton and said, “We are still struggling to sell.”

“We are able to procure our needs smoothly from the domestic producer. The sentiment in the import market is not as strong as before amidst lower US PVC offers and stable ethylene contracts in Europe that would prevent any hike attempt from the region despite the ongoing tightness,” said a pipe maker. 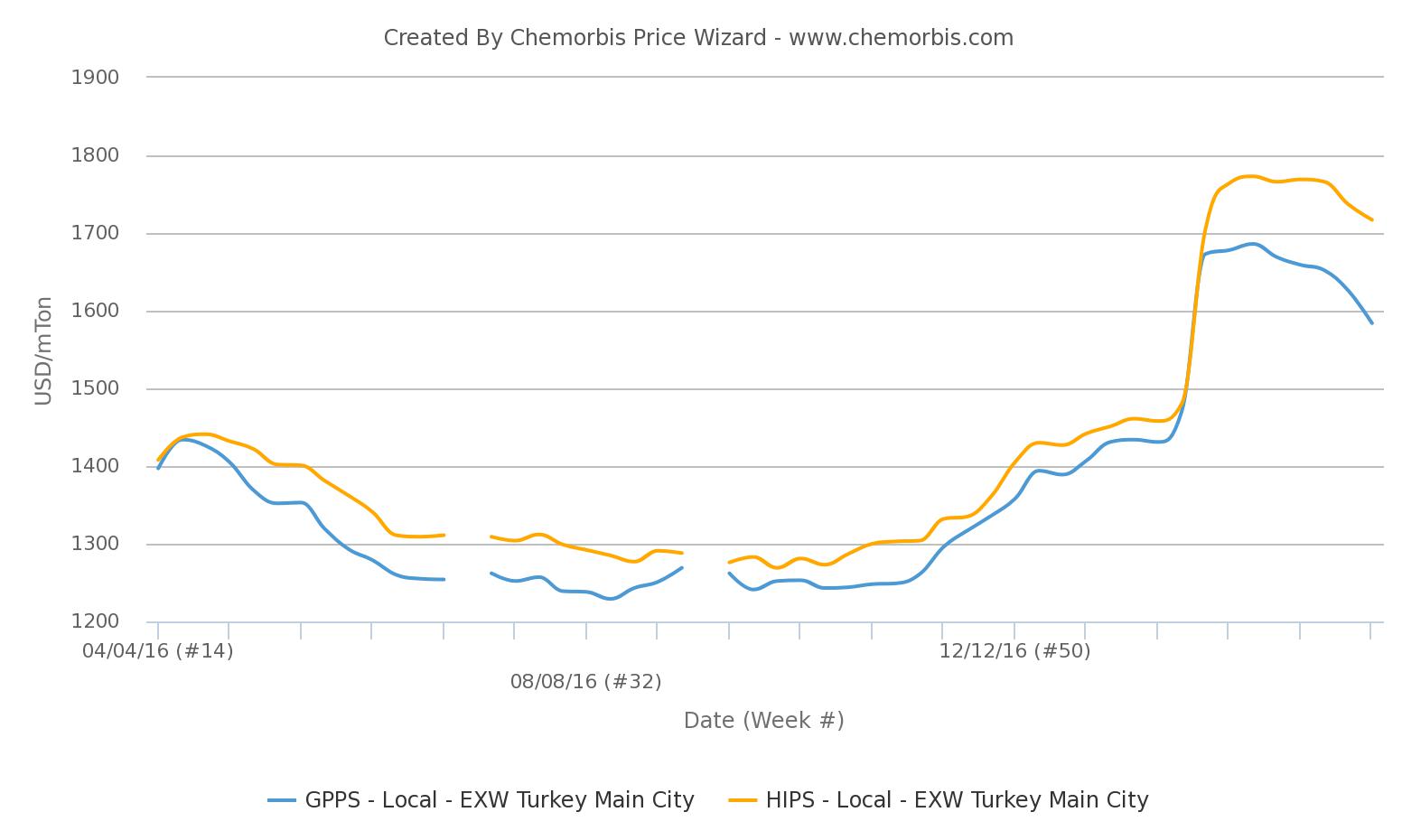 PS prices sustained their bearish trend for another week, similarly. The local GPPS prices were reported at $1850-1900/ton inc VAT, $30-60/ton below last week’s range. Players attributed the additional price reductions to slack buying interest and declining offers from Asia. Expectations for lower PS offers from Europe given a possibly steep fall in April styrene contracts reinforced the rapid drops from sellers, according to a PS player. HIPS offers, meanwhile, are centered on $2000-2050/ton, $50/ton lower on the upper end with limited availability keeping the low end flat.

For April, polymer converters hope to see further decreases so long as upstream costs and downstream markets in China do not demonstrate a real rebound. Activity in Turkey does not give any signals for a recovery until after the referendum. Some traders expect to hear rollovers or moderate drops from producers depending on supply-demand dynamics.