by Merve Madakbaşı - mmadakbasi@chemorbis.com
Polyolefin markets have shown mounting evidence of a stabilization towards the end of this week as suppliers were encouraged enough to voice firmer price goals to Turkey for June. PP and PE prices have already recaptured 2008-lows for most products with some of them even dipping to all-time lows after May decreases, data from ChemOrbis Price Index revealed.

Players are now preoccupied by questions led by opposing factors as follows: 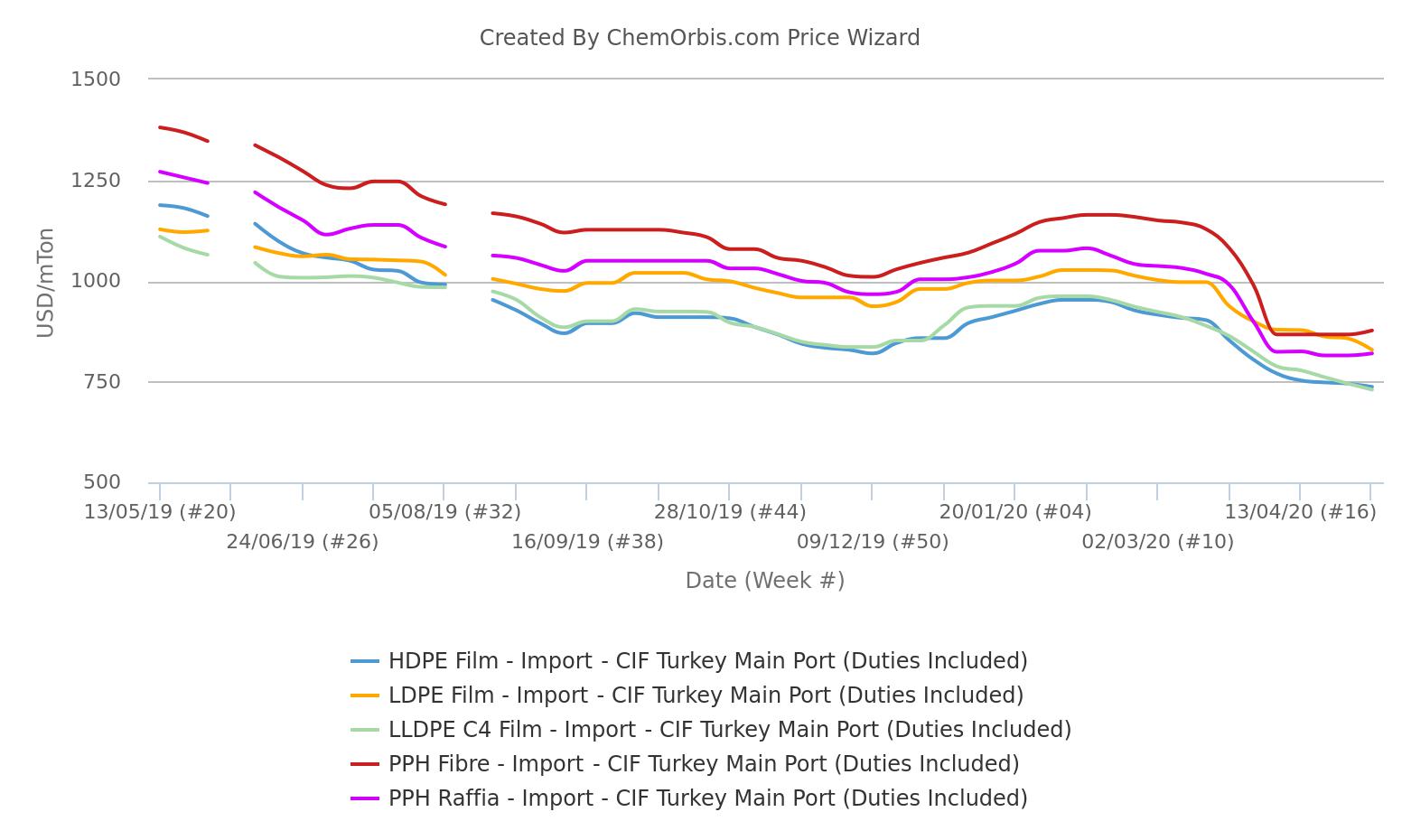 Turkey’s import polyolefin markets started to trade below China around a month ago amid divergent paths in two major markets, the weekly average data from ChemOrbis Price Index revealed.

Homo-PP raffia and LDPE are currently trading $20-30/ton below China, while HDPE and LLDPE film prices are carrying a larger discount of about $70/ton following lower May announcements to Turkey.

Unfavorable netbacks in Turkey caused some Middle Eastern and South Korean suppliers to reduce their allocations in the last few weeks.

"Sellers achieved satisfactory sales to China in H2 April owing to robust demand after the easing of virus-driven lockdowns.
This eased their stock pressure to some extent when activity in Turkey, Southeast Asia and several other markets remained curtailed by the COVID-19 pandemic.”
A global trader

The historic-lows grabbed buyers’ interest this week as they were more willing to reduce their costs by replenishing stocks by paying competitive prices. A buyer affirmed, “Sellers are adopting a firmer stance nowadays. South Korean PP and PE producers are not that eager to sell, while an Indian supplier has already asked for $20/ton increases for certain HDPE grades.”

“We are sold out for May thanks to an increased number of bids from our customers and our moderate availability. Although end demand is not spectacular, some buyers preferred to meet their needs, assuming that they may not find these attractive levels next month if China continues to move up.”
A source from a Middle Eastern producer

Plus, the rumor has it that a regional producer faced production issues for LLDPE and may not provide extra material until mid-May, which contributed to the cautiously improved sentiment.

The upward pressure from China’s PP market helped traders renew their confidence and led to firmer sell ideas for Saudi Arabian and Russian origins. A sack maker reported, “The market did not break below the $750/ton CFR threshold throughout April since it turned to be a resistance point on the sellers’ side. Yet, higher sell ideas have not turned to transactions so far.”

Buying interest continued to be mild for new shipment cargos in the midst of competitively-priced prompt cargos in the distribution market. The locally-held PP raffia range moved below $1000/ton ex-warehouse Turkey, inc. VAT on the low end earlier this week.

American offers added to their losses with aggressive offers to Southeast Asia, Egypt, Turkey and Africa moving into May, which sent prices to below $700/ton CIF in many regions.

Nevertheless, the sentiment relatively improved on the side of suppliers late this week. “A US producer has reportedly suspended production. That explains why traders are reluctant to concede to the previous prices. Offers may have reached the bottom,” said a player.

Players see a strong rebound unlikely in the near term

More players seem convinced that the bearish rally may have come to an end for PP and PE after successive declines that occurred since mid-March under the pressure from collapsing energy prices coupled with virus-hit trading.

Nonetheless, a strong upturn is seen unlikely by many players unless export markets smoothly resume or supply tightens. The sustainability of the firming trend in China amid higher local polyolefin stocks, volatile crude oil prices, the trajectory of COVID-19 and its destructive impact on global economies will precisely remain crucial factors to look at for a while more.

“The depreciation of TRY against the USD curtailed domestic activity towards the end of this week,” a buyer noted. The USD/TRY currency hit an all-time high on Thursday to move above 7.20 before slightly easing shortly after.