by Merve Madakbaşı - mmadakbasi@chemorbis.com
Similar to all polymer markets, Turkey has been through a turbulent year so far with impulsive price movements amid the game-changing effects of the COVID-19 pandemic. The second quarter started with steep losses in polymer prices before they shifted up in mid-May.

Tumbling costs and virus-hit demand all around the world compelled PP and PE prices to multi-year lows from late March to mid-May despite highly disrupted logistics. The lockdowns across the board hit exports and kept purchases at bare minimum amid low capacity utilization rates at the time.

This was followed by a bounce for both products last month, however, as the re-opening of economies in stages and the ongoing disease spurred increased demand for certain goods, mainly food packages and medical applications in Turkey. The surge in crude oil markets amid a recovered demand outlook contributed to the scene.

According to ChemOrbis data, import PPH prices plunged by around 25% while cumulative declines reached 20-24% for PE grades during the bearish rally. The upturn that kicked off later in May has pushed PP offers up by 15-20% for homo-PP and PE prices by 15-22% on a weekly average. 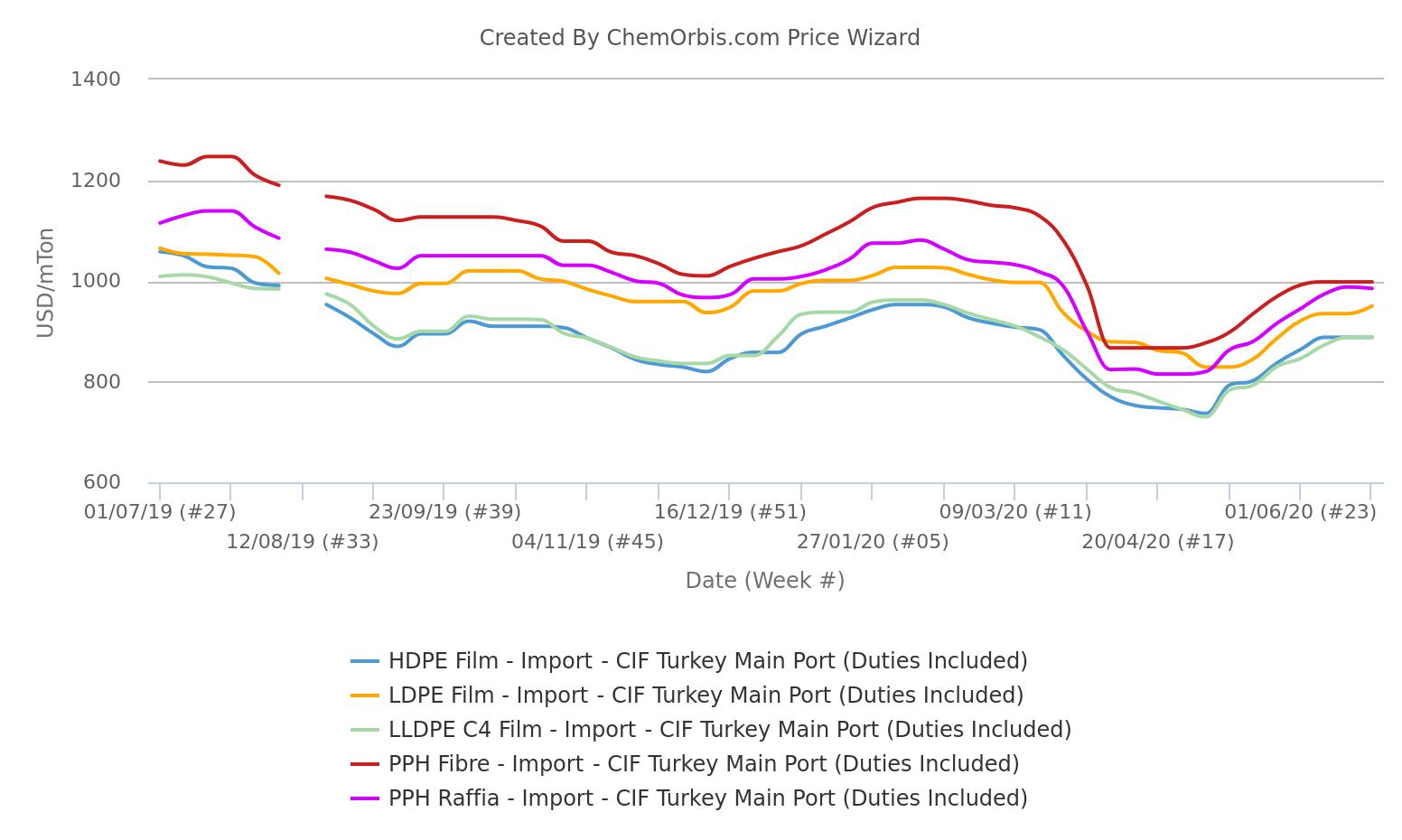 Why are PP projections less strong compared to PE?

Import PPH prices followed a mostly steady trend during the last two weeks as activity calmed down. This led to a slight ease in the locally-held market this week, while the firm trend in China held the import market firm at the prevailing levels. “Prices above $920/ton for raffia and $950/ton for fibre on CFR Turkey, subject to 6.5% duty became scarce this week amid a lack of price discussion,” affirmed players.

The weekly average data from ChemOrbis suggested that import PPH prices in Turkey continue to carry a premium of $80/ton over China, which may tempt sellers to allocate more volumes to Turkey at some point. However, the premium for PE stands between $27-44/ton.

Additional but smaller PE hikes seem on way in July

Turkish players are voicing their expectations now that July is right around the corner. The upstream chain including spot naphtha and olefin prices posted steady gains for the most part of June. This reinforced a common opinion that Middle Eastern PE suppliers may return with slight increases taking recently muted demand into account.

The view is supported by multi-month high ethylene in Europe and Asia as well as a lack of healthy premium of Turkey’s import PE market over China. This may encourage sellers of other origins to maintain their firm policy for another month. “We do not expect any LLDPE and HDPE prices below $800/ton CFR for US origins,” some large traders noted.

A buyer expects to receive initial Middle Eastern offers at $900/ton for LDPE and $850/ton for HDPE and LLDPE film. Fresh announcements are due for next week, he believes.

Markets remain torn by a bunch of opposite factors

The state of demand in global markets may play a key role in the setting of the size of any further gains as the worrisome resurgence of virus cases in Asia, America and Africa keeps vulnerability in place. The sustainability of the firm pricing and improved demand in Chinacomes to the forefront as a factor to be tracked on the longer run.

“So long as activity in China continues at a certain level and netbacks remain high, import PE sellers may not direct much volume to Turkey next month,” argued players.

Looking at Turkey, prices would be supported by higher expected monomer contracts in Europe and the ongoing tightness for particular products including some LDPE grades and HDPE pipe 100. The broader picture makes it necessary to monitor the impact of the second wave of pandemic on local and global economies as well as oil futures, however.

“PP prices may hover at or close to the prevailing levels moving into the second half of the year as most buyers are covered now. Modest hikes for PE are likely but the possibility of rollovers on deals should not be excluded. Prices may turn down after July,” said some Turkish players.