by ChemOrbis Editorial Team - content@chemorbis.com
Turkey’s PVC market has been retreating steadily since mid-August. According to ChemOrbis Price Index, import PVC k67 prices have posted a cumulative decrease of around $130/ton on average in this timeframe.

European PVC k67 prices have already broken below the $1000/ton threshold in November on CFR, cash basis with players reporting receiving initial offers from the region at $980-990/ton. “If we were to place firm bids, we may easily obtain $960-970/ton for European origins,” opined several buyers.

As for the US, k67 offers also hit the $900/ton threshold on CFR, cash, subject to 6.5% duty and $45/ton antidumping duty basis. The overall range was reported at $900-925/ton for k67 from the country for new shipments. Any offer below this $900/ton threshold is yet to be confirmed by players in Turkey while Egyptian players already reported offers at $875/ton on cash equivalent basis.

The local market has reached its lowest level for the past two years as well. Prompt cargoes were reported at $1250-1270/ton inc VAT for prompt cargoes while en-route cargoes were offered at $1220-1230/ton ex-warehouse, cash inc VAT. 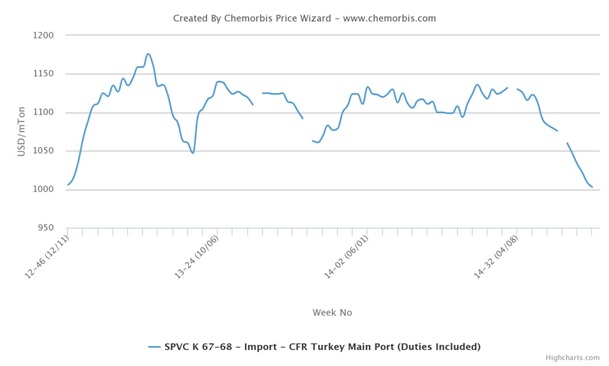