by ChemOrbis Editorial Team - content@chemorbis.com
Import polyolefin prices in Turkey retained their bullish momentum this week as more suppliers approached the market with higher price goals for January. Rising PP and PE prices were already projected due to the lack of premium over China’s import markets for months now coupled with moderate allocations on the part of several Middle Eastern sources and firmer monomer costs.

Following the recent firming observed since the middle of December, homo PP fibre as well as LDPE and HDPE film markets moved back up to the levels of May, 2016, as can be seen on the chart below. 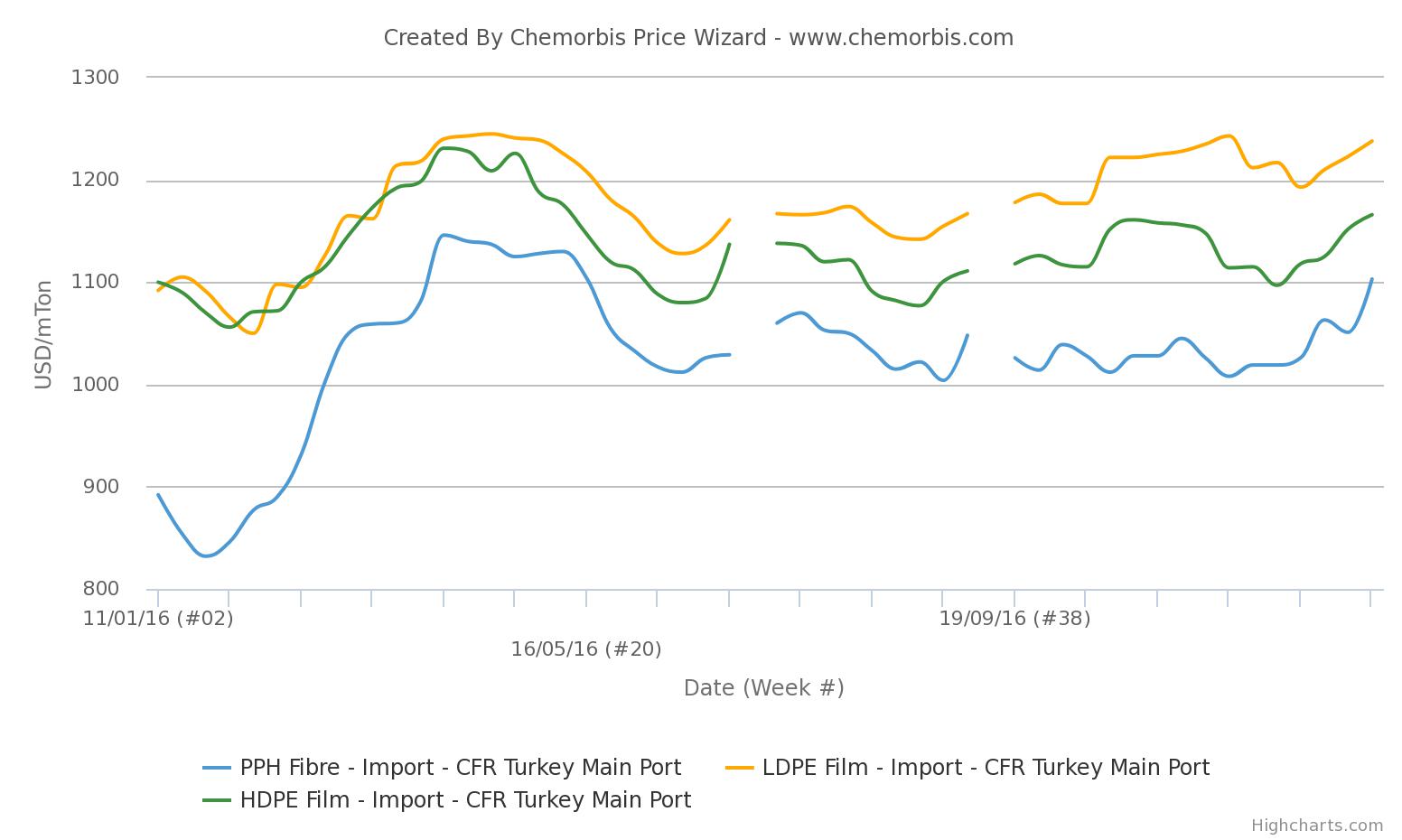 A global PP and PE producer lifted its list prices by $40/ton for LDPE film and $20-30/ton for homo PP, both Saudi Arabian origins, bringing the total increase to $60/ton for January. A Middle Eastern producer, who unveiled its January LDPE and LLDPE prices with increases of $10-30/ton month over month last week, applied additional hikes of $30/ton due their limited allocation. “We achieved satisfactory sales for the month. We have asked for additional volumes from our producer for next week and are waiting for the reply,” an agent of the supplier reported. Another regional supplier stated that they don’t feel sales pressure thanks to their already small allocation.

Increases not only emerged from the Middle East but also other sources applied hikes with the support of higher monomer costs. Iranian PP prices gained $25/ton from last week. PE offers for prompt Egyptian materials were up by $30-40/ton compared to the start of the week, while PE pipe 100 natural posted a more remarkable increase.

A manufacturer argued, “PP and PE prices are apparently higher for January and some increases already started to pass on deals to some extent. However, manufacturers don’t seem in a panic or to be rushing to purchase more than their basic needs assuming that prices may roll over in February due to the New Year holidays in China.”

“We found the current levels very high to work with and thereby we plan to wait for a while to see if we could obtain a bit more competitive levels once holiday starts in China by late January,” a packager mentioned. Another buyer agreed and expressed his expectation for a price adjustment from a major Saudi Arabian PE source whose prices stood at the top of the import market. “The depreciation of TL against USD remains as a main concern while end markets are not performing well. These factors would keep the bullish trend in check ahead of holiday in China,” said a player.