by Merve Madakbaşı - mmadakbasi@chemorbis.com
Import homo-PP prices in Turkey have been gradually falling for the last 4 months. The primary reason behind the constant declines is hesitant demand amid tight liquidity and the ongoing economic woes. The downturn gained momentum during summer as holidays across the board hindered end-product exports of converters, which resulted in a slump in demand for PP and led to a rise in supply.

Supplies have gradually built throughout the summer months since converters opted to keep their purchasing volumes moderate considering their reduced end product orders from export destinations. A fibre converter noted, “We received very limited orders from Europe amid long summer festivities in the region. Eid al-Adha holidays also curtailed our business to the Middle East to some extent and we are still operating at reduced rates.”

Not only the summer holidays but also uncertainties related to Brexit cushioned end demand from Europe for certain applications, according to converters.

The lack of clarity over whether or not Britain will leave the EU as of October 31 with a deal has largely hindered economic activity in the region. Concerns of possible tariffs and border checks in case of an exit without a deal remain in place. The European Central Bank lowered interest rates on September 12 in an attempt to boost slowing trade and economy.

The economic performance of Europe is important for Turkish plastics converters as their top three export destinations were Iraq (9%), Germany (7%) and the UK (5%) in the previous two years. Exports to Europe generally form approximately half of overall plastics exports.

Market is well fed by extensive variety of origins

No supply concerns appear on the near horizon as the variety of origins have been wide in recent weeks in the import market. “The consecutive discounts for Saudi Arabian cargos failed to grab much interest amid mounting pressure from competitive Egyptian, European, Israeli and Iranian materials. Buyers are not in a hurry,” a player highlighted. 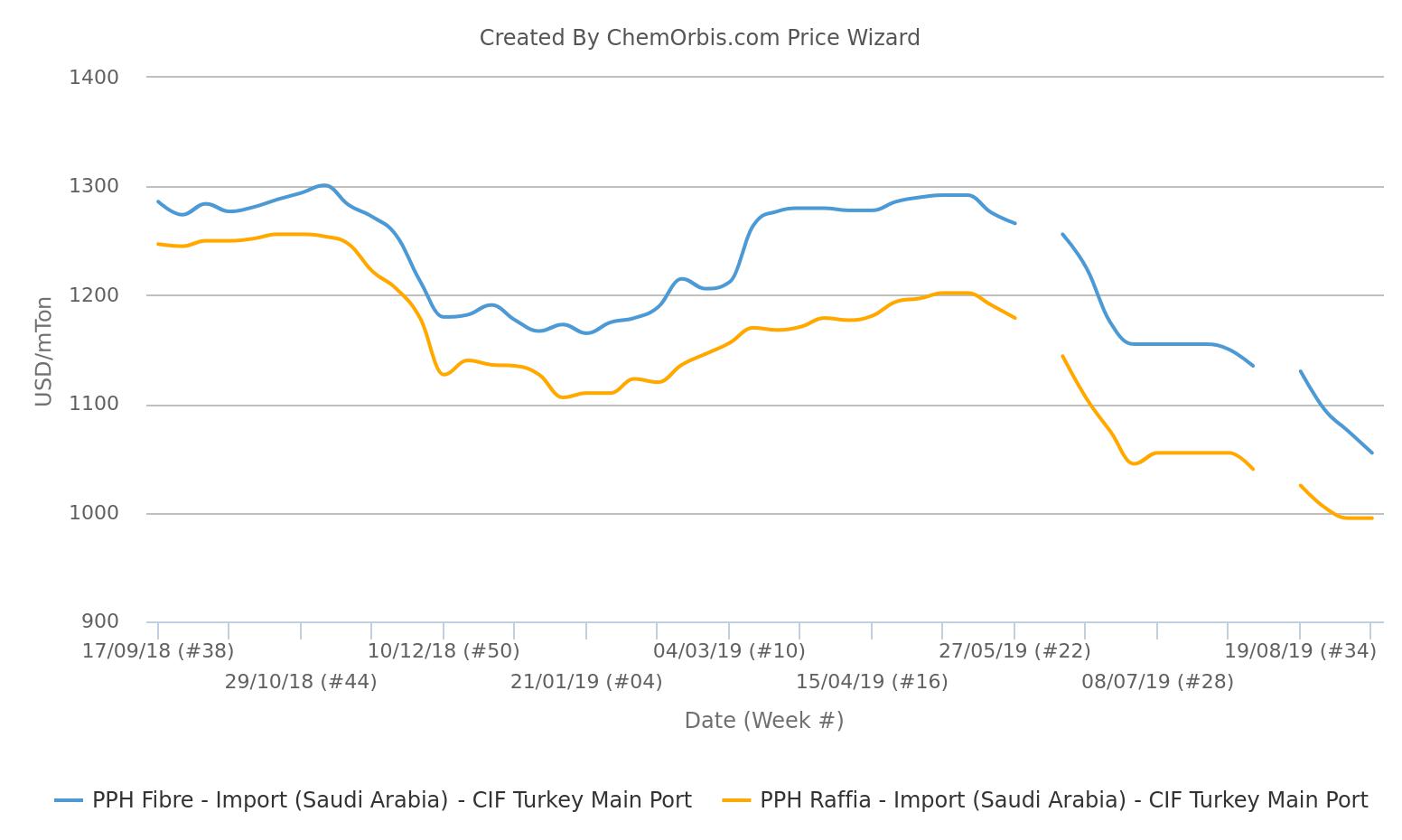 An increasing number of players have confirmed receiving prices below the $1000/ton CFR/CPT threshold for origins including Russian and Turkmenian since last week. These offers have stood at or close to the low end of the import homo-PP raffia market this week.

According to ChemOrbis Price Index, import PP prices in Turkey have sunk to multi-year lows in September. Prices for both products dipped by around 19% on a weekly average since the bearish trend kicked off in mid-May this year. Data suggested that PP fibre prices plummeted by $261/ton while raffia sank by $246/ton in the period.

Now, Turkish players are readying to keep an eye on China to see whether or not this market will manage to hold firm in the coming weeks. “If so, price cuts in Turkey would lose steam considering the long-lasting lack of premium over China,” argued a trader. He added, “Still, we are not so optimistic for the longer run amid uncertainties regarding the global and domestic economy as well as the nearing week-long holiday in China. We could hardly collect any bids from our customers this week and activity remains at a standstill in Turkey.”

Turkey’s Central Bank, meanwhile, lowered key interest rates for the second time in two months on September 12. Players are now waiting to see if this move will also help buoy trade in Turkey in the upcoming days.